The Sixers could use a point guard who can effectively get the ball into the post for guys like Jahlil Okafor and Nerlens Noel. They have a few PGs on the roster — Tony Wroten, Isaiah Canaan, Pierre Jackson, Scottie Wilbekin, T.J. McConnell — but none are particularly thrilling.

He’s not thrilling either — particularly his shooting or the fact he’s coming off an ACL surgery — but Philadelphia sees him as a better option and is  about to sign him to a deal, reports Adrian Wojnarowski of Yahoo Sports.

Marshall has been rehabilitating a torn anterior cruciate ligament in Chapel Hill, N.C., over the past few months and worked out this past week for the 76ers in Philadelphia. Marshall is expected to return sometime in the first half of the upcoming season, league sources said.

The Sixers are still in the tanking/rebuilding/however-they-wish-to-define-it mode and so being patient to get a known quantity point guard until the second half of the season is not an issue.

Marshall is just 24 and could develop into a reliable point guard — he can dish the rock but has question marks just about everywhere elseAt least he can be a respectable trade chip for the Sixers, so the deal makes sense for them. Just don’t expect more wins because of it.

Playing in both the Orlando and Las Vegas Summer Leagues, Justise Winslow showed some flashes of why he felt like a steal for Miami at No. 10. You could see the athleticism on both ends of the floor, he played at pace but under control, he had solid handles, and he knew how to attack the rim and use his body to draw calls.

But his shot needed work. He hit just 34.2 percent overall and 25 percent from three (3-of-12) across the two summer leagues. There seemed to be a little hitch in his release.

That’s what he’s been working on with Heat coaches through the rest of the summer, Winslow told the Miami Herald.

“I definitely feel comfortable shooting from three-point range but it’s working on everything: pull-ups, mid-range, posting up, finishing. There has been a huge emphasis on my shooting mechanics, trying to get everything more fluid and more natural so I can become a better three-point shooter. But there hasn’t been an over-emphasis on three-point shooting.”

Winslow shot the ball fairly well at Duke (41 percent from three) and was impressive in the tournament, but he needs to clean everything up now that defenders are faster and longer.

Winslow is should get plenty of run off the bench for the Heat this season, and in a system that suits his strengths. He’s probably not going to get the touches needed to get the numbers for Rookie of the Year (not with Jahlil Okafor and Emmanuel Mudiay getting the keys to their respective franchises) but he’s going to look good fast. And get better from there.

So long as that shot starts to fall.

But none of them are great options.

So, Philadelphia is considering hedging its bets by bringing another point guard to training camp – Kendall Marshall.

The #sixers have expressed interest in free agent G Kendall Marshall, per source.

Kendall Marshall has been with the Sixers at PCOM the last few days, per a league source. A training camp invite looks on the horizon.

Marshall played well for the Bucks last season before tearing his ACL in January. If healthy, he’s a good distributor, a fine backup.

It also doesn’t hurt that Marshall is just 24. The 76ers could buy low on him and hope he becomes a better player once they’re ready to win.

The big Laker story line this season revolves around Kobe Bryant — will he or won’t he?

The more important story line to the future of the Lakers is the development of their three young stars — D’Angelo Russell, Jordan Clarkson, and Julius Randle.

Lakers co-owner Jim Buss spoke to the Los Angeles Times about all things Lakers — Buss is trying to raise his profile and grow his positive numbers among Lakers fans, but that’s another story — and he heaped praise on their three young stars. That starts with Russell — the Lakers didn’t take big man Jahlil Okafor and instead bet on the point guard out of Ohio State with the highest draft pick the Lakers organization has had since it selected James Worthy.

“We’ve got high aspirations for him,” Buss said. “We normally look to get bigs, but [Russell] was just that impressive, that we just didn’t feel right passing up on him.

“My enthusiasm for D’Angelo Russell, I have to curb it because I’m so excited about it. He could be anything in this league.”

The Lakers are very high on Russell — in a point guard driven league they see him growing into one of the elites. They are high on his potential and chose that over Okafor, who may not have the higher ceiling (that’s up for debate) but certainly has the higher floor. The Lakers rolled the dice that Russell is special.

As for Clarkson and Randle:

“(Randle is) a beast. He’s been working out with some ex-NBA players and handling himself very well. He’s super strong, very fit,” Buss said…

“Watching Jordan Clarkson develop [this summer], he’s followed that same path, how he got better and better every game,” Buss said.

Watching the three Lakers at Summer League, each of them showed moments of promise and lots of room for improvement — like all young players. Clarkson put up big numbers in Las Vegas but dominated the ball and didn’t work as well off it. Randle understandably looked rusty at times, showed that physicality and athleticism at other times, but worked too much in a straight line and needs more moves. Russell had a rough start to the Summer League as the game just seemed to move too fast, and he tried to do too much. But that’s Summer League, it is a place for development, what matters is how they grow as players from these early points.

The question is, do the Lakers have the infrastructure to develop these players? Is Byron Scott the coach to do that?

That is the story line that matters most for the Lakers next season, while we all talk about Kobe. 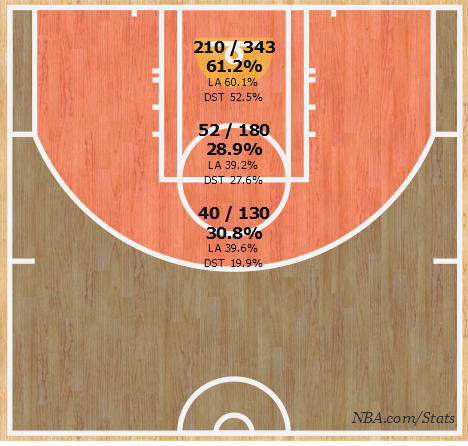 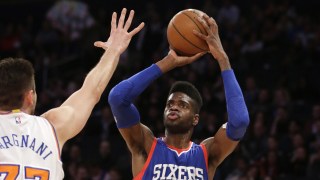 Justise Winslow working on cleaning up jump shot this summer September 4, 2015 8:32 am EDT

Phil Jackson questions whether Duke players live up to expectations in NBA July 24, 2015 10:55 am EDT

Nik Stauskas looking for redemption in Philadelphia July 15, 2015 8:00 am EDT

Sixers GM ‘would like to think’ he would have drafted Jahlil Okafor even if Joel Embiid was healthy June 27, 2015 3:30 pm EDT

PBT Extra: Unpredictability of draft leads to some good fits down the board June 26, 2015 9:30 pm EDT