Friday was the deadline for a few contract items for first-round picks on the rookie scale.

It was also the deadline for fourth-year players to sign extensions that begin in 2015-16. Eligible players who didn’t sign extensions can, at their teams’ discretions, become restricted free agents this summer.

Remember, the salary scale for first-round picks is determined by the year they sign, not the year they’re drafted (those are usually the same).

Here’s how all those decisions were made around the league:

No. 16 pick Lucas Nogueira signed with the Raptors this summer, and No. 29 pick Livio Jean-Charles, whose rights are held by the Spurs, has yet to sign in the NBA.

No. 23 Nikola Mirotic signed this season and not for scale. 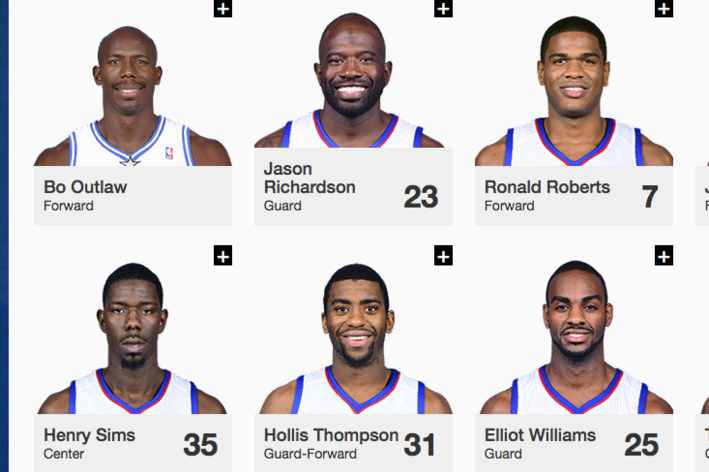 Travis Outlaw couldn’t stick in Sacramento last season (they were nearly four points worse per 100 possessions when he played) and after getting a look at him in training camp the Knicks decided they might just cut him loose and keep undrafted rookie Travis Wear.

Except the Knicks found a taker in a trade — the Philadelphia 76ers. A team that has no use for Outlaw either and will soon cut him free.

Trade calls for Sixers to send Arnett Moultrie to New York and take in Travis Outalw, who is likely to be released by Philly

UPDATE: New York acquired then instantly waived Arnett Moultrie. He could be destined for their D-League team.

The Knicks have Quincy Acy up front, he will get the minutes that it seemed Outlaw might get before camp opened.

Moultrie is unquestionably athletic but after a nice rookie season took a huge step back last season following ankle injuries. He had conditioning issues (and missed five games for a drug suspension last season) but looked a little better in the preseason, putting up solid lines. That was not enough.

What does Philadelphia get out of this? Picks. Sam Hinkie is still hoarding picks. And they get worse on the court. They have no real use for Outlaw, they are going to give frontline minutes to Nerlens Noel, Henry Sims, Malcolm Thomas (who they like) and Brandon Davies.

It’s not likely Outlaw — a stretch four who is a negative on both ends of the court at this point (although he can hit some threes) — will land another deal.

A five-game suspension is the punishment for a third marijuana violation. (The first violation carries no penalty, and the second is a $25,000 fine.)

Moultrie, who hasn’t played in Philadelphia’s last nine games, is averaging 3.0 points and 2.9 rebounds in 15.6 minutes per game this season.

Yet, every season, for one reason or another, there are many NBA players who produce at below replacement levels. This season, it seems many of those sub-replacement-level players will be members of the 76ers.

Keith Pompey of The Inquirer:

Michael Carter-Williams, James Anderson, Evan Turner, Thaddeus Young, and Spencer Hawes are the clear starters. The second thing is that power forward/center Lavoy Allen is an experienced NBA player who is finding his way back into shape.

“And after that, who knows?” Sixers coach Brett Brown said before Monday’s 104-93 setback to Cleveland in Columbus, Ohio. “You have six NBA players and then you have a bunch of guys who are fighting for spots and want to be seen and need opportunity.”

If I were Darius Morris, Tony Wroten or Daniel Orton, I’d be a little perturbed by that comment.

But only a little.

Though Morris, Wroten and Orton played in the NBA last season, they’re not necessarily NBA players anymore. Vander Blue, Mac Koshwal, Gani Lawal , Hollis Thompson, Royce White , Rodney Williams and Khalif Wyatt all want a spot on the roster, and the Riggin’-for-Wiggins 76ers are just the team to accommodate.

This is a large group of flawed players, and Philadelphia will keep whomever it believes can help most down the road. That’s obviously a difficult judgment to make with players like these, so the small margins can matter a great deal.

Experience alone won’t cut it. Brown is in a rare position to demand a lot from a large share of his roster, because the 76ers have relatively few highly paid players. These 10 players are really going to have to bust their hump to make the roster.

As Brown is all too happy to remind them, they’re not really NBA players yet.

Every rookie-contract team option and extension decided by Friday November 3, 2014 10:05 am EST

Sixers’ Arnett Moultrie out until January after ankle surgery September 27, 2013 11:20 am EDT

Wayns out in Philly; Sloan in for Hornets; deadline pushes lots of end of bench moves January 7, 2013 11:48 am EST