Anthony Davis simply got wherever he wanted on the court Sunday night. And he wanted to be in the paint, right in front of the rim. Davis shot 11-of-11 at the rim and 17-of-23 in the paint on his way to what his coach described as an “old-school, smash-mouth way of getting 50.”

Yes, 50. Davis had his best offensive game as a Laker going right through the size of Karl-Anthony Towns and the Minnesota Timberwolves, leading Los Angeles to a 142-125 win.

LeBron James did plenty — 32 points on 20 shots, plus 13 assists — but he battled foul trouble through the first half, and that’s when Davis put the team on his shoulders and carried them.

He carried then to the rim — Davis had 27 points on 12-of-15 shooting in the first half, and only one of those buckets from outside paint. Or, take a look at his shot chart for the game, it’s all about points in the paint. 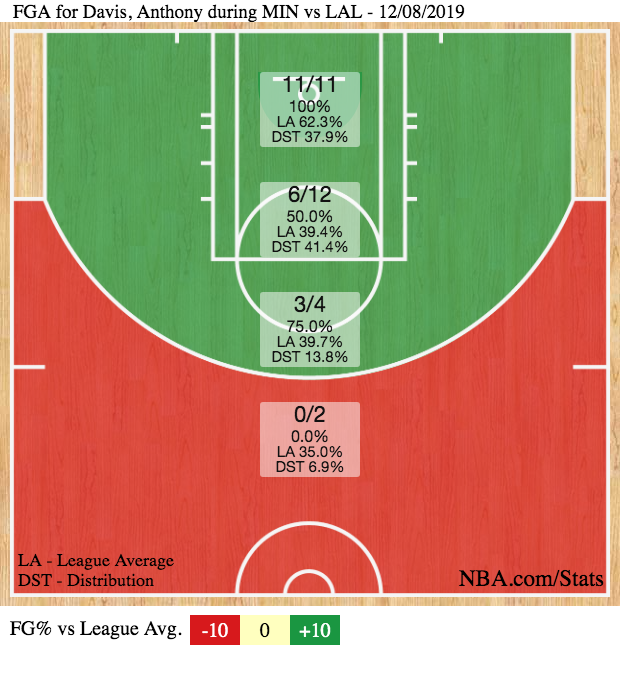 “I was feeling very good tonight, very well rested, going against another great big man in Karl-Anthony Towns… you get up for those games, they’re a team that’s hungry,” Davis said.

Karl-Anthony Towns and Andrew Wiggins each had 19 to lead a balanced Minnesota attack. The Timberwolves hung around the game because they were getting buckets against the Lakers. It gave them hope.

“I yelled at them for giving up 125, but I don’t think anyone heard me,” Lakers’ coach Frank Vogel joked after the game.

The Laker defense was not great, but the way they got buckets it didn’t have to be.