1) Anthony Davis shows you can go home again. Anthony Davis knew this game was different. It’s always a little different when you’re a Laker — former Grizzlies executive (now with The Athletic) John Hollinger said that being a Laker is not like being in the NBA. He means that every night the game is sold out, fans show up early to watch warmups, there are Lakers fans everywhere and they show out, and all that gives the games emotional energy lacking in NBA arenas most nights. With the Lakers, every night is a show.

This night, however, Anthony Davis was coming back to New Orleans and he knew what to expect. From the perspective of fans in New Orleans, Davis never embraced their city and its traditions the way the biggest local hero — Drew Brees — has (the Saints QB used to walk home from practice and has made a point to be part of the city’s life.) New Orleans locals felt Davis was not one of them. The way Davis left the Pelicans — starting with a very-public mid-season trade demand clearly aimed at forcing his way to the Lakers, a move that cut the team off at the knees — was just further proof he was never truly with them, this was just business, just a stop for AD.

Davis knew what to expect from the moment he stepped on the court for warmups.

Lakers are out for warm ups. AD said he expected to hear boos, and his teammates are locked in to rally around it; that began this morning with a very focused shootaround. pic.twitter.com/DjoXLi5DmH

And the boos got louder when he was introduced and continued through the game.

From Davis’ perspective, he did embrace the city — he’s quick to say how much he loved it. Davis is more of an introvert, a guy who just wants to spend time at home with family and close friends, playing video games and hanging out. He loved the city and did take part in a Mardi Gras parade and more, but those public events are not his comfort zone. What’s more, Davis gave the city all he had on the court – to him that is the ultimate respect.

Davis wanted to show New Orleans fans one more time what it looks like when he left everything on the court — and he did to the tune of 41 points Wednesday night, plus he had the game-sealing steal at the end.

Anthony Davis tallies 41 to set a NBA record for most points scored by any player in their first match-up against their former team! #SAPStatLineOfTheNight pic.twitter.com/p3s2hWT1Mm

Davis has in Los Angeles one thing he never really had in New Orleans: teammates capable of picking him up and helping him out. Particularly one LeBron James, who has done the “return home to hostile environment” thing so he could help Davis emotionally prepare, but also LeBron can drop 29 points and 11 assists.

Davis’ Lakers teammates helped the team rally from 16 down in the fourth quarter to win 114-110. Davis got to make his statement on the court.

Now the 16-2 Lakers and Davis will return home to a fan base that has embraced the star, and a city that is more than used to big talents that can be a little aloof and want things on their terms. Los Angeles has a whole major industry built around it.

With Davis the Lakers look like contenders again, and in Los Angeles if you can do that the fans will love you no matter what.

2) Kyrie Irving misses game vs. Boston but has emotional response anyway; Kemba Walker proves himself a steady leader. It was a little strange to have the Nets vs. Celtics game be emotionally charged about a guy who wasn’t even in the building. This was supposed to be Kyrie Irving return to Boston and Celtics fans were not going to let the fact he wasn’t there — he has missed seven straight games with a shoulder impingement — stop them from a cathartic chance to lash out at their scapegoat for last season and all he cost the team.

There were signs in front of TD Garden with Irving’s picture and the word “coward” on them.

Currently out the front of TD Garden: pic.twitter.com/dVKuCOu0rT

And there were the chants. 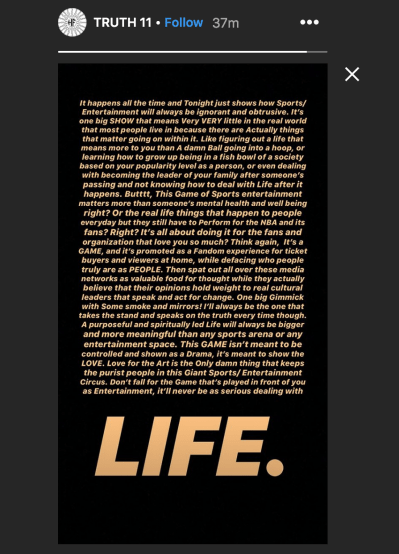 Meanwhile, in Boston, Kemba Walker reminded Celtics fans what they have now — a steady leader who can get buckets with the best of them. Walker had 39 to lead Boston to a 121-110 win.

The Nets and Celtics play on Friday in Brooklyn, it’s not known yet if Irving will be healthy enough to suit up for that one.

You can be sure Celtics fans circled March 3 on their calendars — that’s the next time Irving and the Nets are scheduled to come to Boston.

3) Jabari Parker went home again, too, dropped 33 on Milwaukee in a loss. Jabari Parker misses Milwaukee, even if the Bucks fans don’t miss him. The No. 2 pick in the 2014 draft — a player expected to be NBA ready, so the Bucks took him in front of the injury risk that was Joel Embiid — never panned out in Milwaukee the way everyone hoped, and after four years they let him walk. The past few seasons Parker has bounced around the NBA, currently landing with the Hawks.

Wednesday night Parker returned to Milwaukee to play in their new downtown building, and he showed Bucks fans that he could always get buckets — he scored a game-high 33 points, plus had 14 boards and 5 assists in a losing effort.

After the game, Giannis Antetokounmpo — who had 30 points and 18 rebounds himself — had nothing but praise for his former teammate (via ESPN).

“At the end of the day, Jabari’s such a good player one-on-one, so I try not to get out of your game because you know that he loves to do that. He wants you to play one-on-one because he’s so good at it.”

Parker has found a comfort level in Atlanta this season that’s good to see, he’s contributing even as the Hawks struggle. Those contributions are something to be thankful for.