1) Ice cold James Harden doesn’t warm up with Giannis Antetokounmpo out, Bucks win. The “fancy” advanced statistical way of putting it would be shooting variance from a team’s statistical norms, something smart people look at when breaking down a game.

A simpler way to put it: It’s a make-or-miss league.

Thursday night, the Rockets were making in the first half, when they shot 52.4 percent from three and led by 16 at halftime. Then they missed in the second half, when just 18.5 percent of their threes fell.

That’s when the Bucks got back into it by using their size on both ends — Brook Lopez and Giannis Antetokounmpo led the charge, and the Bucks went on to win 117-111 in the season debut for both teams.

Antetokounmpo finished with a triple-double of 30 points, 13 rebounds, and 11 assists — getting 20 of those points in the second half — but with 5:18 left in the game the Greek Freak used his off arm to clear out Clint Capela, got called for his sixth foul of the night, and went to the bench.

The Bucks were up just six at the time and it felt like the Rockets’ chance. Russell Westbrook made a push to close the gap to one, and then… nothing. The Rockets could not get their shots to fall, going 1-of-5 from three after the Greek Freak fouled out. James Harden was 0-of-1 from the floor in that stretch. Scrappy play from Milwaukee had it holding on for the win, thanks to a critical three from Khris Middleton and Lopez playing well as the fulcrum of the offense.

Harden, in particular, couldn’t find the range all night, no matter who was on the floor. The former MVP was cold, shooting just 2-of-13 (although he did get to the free throw line 14 times). Check out his shot chart. 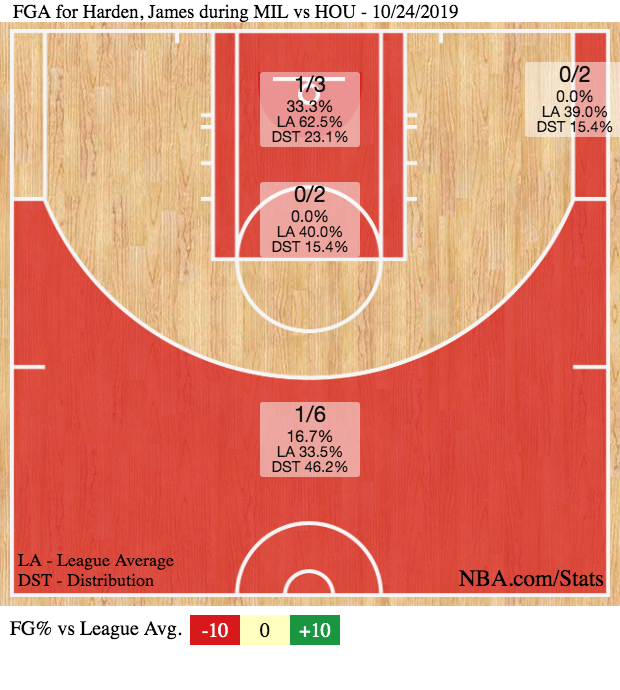 Even when Harden got off a decent shot, this happened.

What a block by Giannis!! #FearTheDeer pic.twitter.com/LxiKtT6GuK

Westbrook had a better night in his Rockets debut, scoring 24 points, grabbing 16 boards, and dishing out seven assists.

This loss wasn’t about Harden and Westbrook not meshing — although they did argue a little — but more about defensive questions for Houston, something that is going to follow them all season long. Getting stops is going to be a challenge.

Also in their opener, the Rockets just missed shots. And it’s still a make or miss league.

2) The positive vibes in Phoenix didn’t even last 24 hours, Deandre Ayton suspended 25 games. Wednesday night, Deandre Ayton had his best game as a pro. It was well rounded — he has scored more than 18 points and grabbed more than 11 rebounds before, but he was an efficient 9-of-14 in the opener. More importantly, he had his best defensive game ever, including four blocks. Yes it’s small sample size theater, but Ayton and the Suns looked better than expected in blowing out the Kings.

Thursday all that momentum came crashing down — DeAndre Ayton was suspended 25 games by the NBA for testing positive for a banned substance. Specifically, a diuretic (which is on the list of banned substances because it can be a masking agent for steroids).

“I want to apologize to my family, the entire Suns organization, my teammates, partners, our fans and the Phoenix community,” Ayton said in a statement. “This was an unintentional mistake and unfortunately I put something in my body that I was completely unaware of. I do understand the unfortunate impact that this has on so many others, and for that I am deeply sorry. I’m extremely disappointed that I’ve let my team down. I will continue to work with the NBPA to go through arbitration and am hopeful of a positive resolution.”

About that resolution, there is a portion of the CBA that allows redress if the banned substance was taken without the players’ knowledge. That is the claim of Ayton is making with the players’ union (as well as Ayton’s agent, who clearly spoke to Adrian Wojnarowski of ESPN). It may be true.

The NBPA is already preparing arbitration case to reduce or rescind penalty, based on belief positive test falls under CBA provision of ‘unintentional ingestion', league sources tell ESPN. Ayton was the No. 1 overall pick in the 2018 NBA Draft. https://t.co/UM34cCc3Ol

Whatever happens, Ayton is going to miss time. If it is the full 25 games he is not back until Dec. 17.

Aron Baynes will start at center for the Suns, which is a defensive upgrade (even compared to the improved Ayton) but a significant drop off on the offensive side of the ball. Devin Booker, Ricky Rubio, and Kelly Oubre Jr. are going to have to generate a lot more looks and knock a few down for Phoenix.

The Suns are trying to develop their young core into something special, this is a setback — albeit a temporary one — along that road.

3) The Clippers haven’t even added the guy who was third in the MVP voting last year yet. Kawhi Leonard is making a habit of ruining things for Golden State fans. For example, their last memory of Oracle Arena in Oakland was watching Leonard and his Toronto Raptors teammates celebrate winning a title on that floor.

Thursday night, the new Chase Center in San Francisco opened its doors for basketball — and Leonard and his Clippers blew the doors off the Warriors, winning 141-122 in a game where the fourth quarter was garbage time.

Leonard had 21 points and a career-high nine assists.

As the Lakers learned Monday night, the Clippers come with a balanced attack — Lou Williams had 22 points off the bench and his pick-and-roll partner Montrezl Harrell added 18, Patrick Patterson had 20, even Ivica Zubac had 16. Through the non-garbage time part of the game, the Clippers had a 136.1 offensive rating (stat via Cleaning the Glass). Los Angeles also played good defense, making it difficult for the Warriors to find a rhythm.

The Clippers are 2-0, have looked dominant, and they don’t even get Paul George back until next month. This team looks scary.

The Warriors look like a team with a lot to figure out.

Stephen Curry is going to have to carry the Warriors on offense this season, and he had 22 points but was 2-of-11 from three and had eight turnovers on the night. Without the gravity of Klay Thompson (knee) and Kevin Durant (Brooklyn) to pull defenders away, the Clippers were in Curry’s face contesting everything. Los Angeles is looking like (and on paper should be) an elite defensive team and an exception, but Curry is going to have less space to operate this season than he is used to. The former MVP is going to have to adapt, and the other Warriors are going to have to make teams pay for all that focus on Curry. D’Angelo Russell shot 6-of-16 (for 20 points) and struggled defensively at times.

It is still a long road for the Clippers, too. But they have reinforcements coming.