LOS ANGELES — Every day in the NBA there is a lot to unpack, so every weekday morning throughout the season we will give you the three things you need to know from the last 24 hours in the NBA.

1) Deep bench gives Doc Rivers options Frank Vogel just doesn’t have, and it shows in Clippers’ win. Less than four minutes into the season opener Tuesday night, the Clippers had already been down 11 points, and were having trouble generating good looks and knocking them down. The Lakers fans who made up half the crowd at the Clippers’ home opener were full-throated.

“Let’s get settled down and play some ball,” Williams said of his goal entering the game. “They made some shots and everything was overhyped because of the atmosphere and everything, but it was just an eight-point lead. So we just wanted to get a different lineup in, settle everyone down.”

In control because the Clippers had depth and versatility Rivers could trust — the Clippers won the bench scoring battle 60-19. Rivers had multiple ball handlers and shot creators he could turn to. He had Williams and Harrell to settle things down and get some buckets in the first and fourth quarters (the latter after the Lakers made a 15-0 run to tie the game). He had JaMychal Green to come in off the bench and hit four threes. He had Moe Harkless who could come in and play good defense plus score 10 points. He had Patrick Beverley‘s toughness to lean on.

He had the versatility of Kawhi Leonard’s game. Leonard would hit seven shots in a row in the second quarter, and by the end had 30 points on 10-of-19 shooting.

Leonard, Williams, and Harrell were running actions where Williams would do a dribble hand-off to Leonard, who would then come around a screen by Harrell, and all of them could find a little space. It worked, and it could be so much better yet.

All that, and the Clippers still don’t have Paul George back until next month.

The Lakers don’t have those options.

Los Angeles tried to post up LeBron James and Anthony Davis a lot to take advantage of their size, plus run some of LeBron/Davis pick-and-roll (but not enough). As the game wore on, the Clippers started to defend those actions better — switching but having the big man (usually Harrell) stay back and dare LeBron to shoot or blow past the defender. He did neither well, and he seemed to want to force-feed Davis, which led to five LeBron turnovers. Plus, if Dwight Howard or JaVale McGee were on the floor, the Lakers had no spacing to attack inside. The Clippers clogged the paint, and LeBron and Davis combined to shoot 15-of-40 on the night. Outside of Danny Green, no Laker could make the Clippers pay for how they chose to defend.

Laker coach Frank Vogel didn’t have another playmaking option that worked. (Rajon Rondo didn’t play in the opener, but teams are going to dare him to shoot jumpers, too.) LeBron is the guy with the ball in his hands for the Lakers, the primary and by far best shot creator on this team, and there aren’t other reliable options. Against most teams that may work, but against an aggressive and strong Clippers defense the Laker offense stalled out.

2) Raptors’ championship rings are ginormous, but Pascal Siakam wears it well in Toronto win. Championship rings are supposed to be oversized and gaudy — the team just won a title, celebrate that and show it off. However, the Raptors took that to an almost comical degree with their design. The ring ceremony and banner raising in Toronto Tuesday struck the right notes and was emotional. But I couldn’t stop staring at the rings. They looked like brass knuckles as much as rings.

Soakin’ it all in 🤩 pic.twitter.com/see12f7dtC

Oh, by the way, they played a game north of the border, too, and the theme of depth and versatility played out there as well.

Pascal Siakam just inked a four-year, $130 million max contract extension that had plenty of fans asking if he was worth that much. He looked every bit of it on opening night, both scoring 34 points and finding ways to impact the game when he didn’t have the ball. Exactly like one should expect a max player to do.

However, it was that Raptors’ depth that got them a win on the night. Siakam fouled out late in the fourth quarter, then it was Fred Van Vleet — who also had 34 points — that guided the Raptors to a critical win. He looked like the Van Vleet from the NBA finals, seemingly hitting every shot and making every right decision.

Toronto also got 22 from Kyle Lowry and 13 from Serge Ibaka.

With Zion Williamson out (at least 20 games, but more likely close to 30, think Christmas return), the Pelicans became a little less watchable. Just know this: they are still good. The Pelicans moved the ball well, got 22 points out of Brandon Ingram, 16 out of J.J. Redick, and some surprisingly good big man play from rookie Nicolo Melli. The Pelicans also tied a franchise record with 19 made threes. All that on a team where coach Alvin Gentry is clearly still trying to figure out his rotations.

3) The NBA’s China problem isn’t going away. As you walked up to Staples Center for the season opener between the Lakers and Clippers, two things jumped out at you. First, security was at a level usually reserved for the All-Star Game or NBA Finals (TNT’s outdoor stage by the arena tied into that).

Second, people approached you giving away “Stand with Hong Kong” T-shirts for free. When asked about it, I was told the goal was to hand out 13,000 of these for free. (Photo via Dave McMenamin on Twitter.) 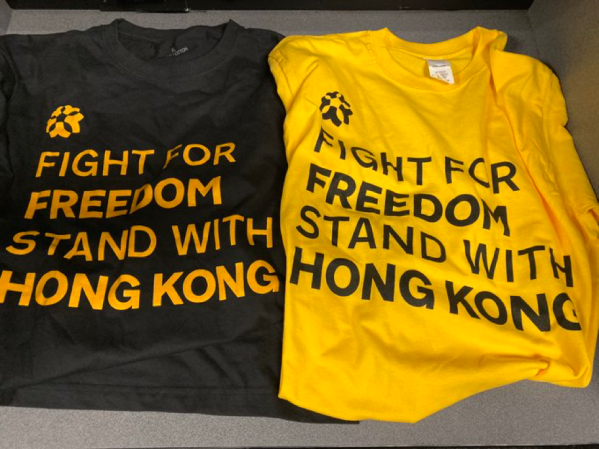 I certainly saw some shirts worn inside Staples Center (as well as some of the Clippers giveaway shirts), but mostly this is Los Angeles so nobody wants to cover up the $400 T-shirt they conspicuously wore to the game. Still, people were taking them.

There was a group giving away shirts outside the arena in Toronto Tuesday night, too, although on the broadcast it appeared most fans seemed to go with the giveaway shirt on a banner raising night.

Nobody in China saw any of this because Chinese state media chose not to broadcast the opening night games. Plenty of people in America heard another discussion of it because Shaq, Charles Barkley and the Inside the NBA crew on TNT discussed it pregame.

With actual NBA games starting, league officials are hoping the situation with China will calm down. It likely will, for now. But it’s going to be simmering along on the back burner and at some point something will crank up the heat and it will boil over once again.