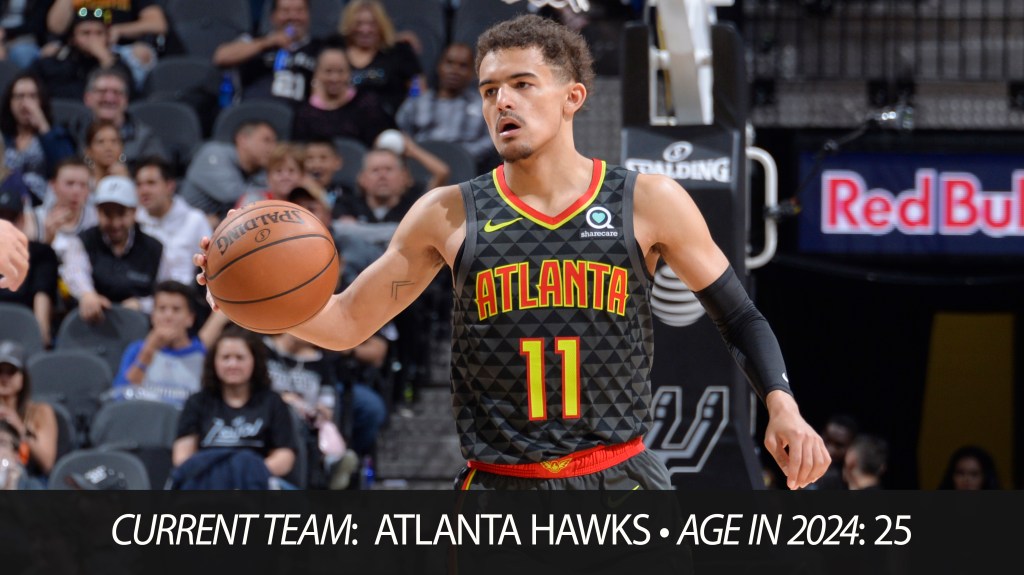 How fast and how far Trae Young can develop his game was on display before he ever stepped on an NBA court. In his first NBA Summer League game (in Salt Lake City) he missed his first 11 shots and looked like a guy struggling with the speed and length of the game. By the end of the Las Vegas Summer League, he was one of the best players in it, knocking down threes and finding teammates with spot-on passes.

The same thing happened during his NBA rookie season. He struggled at the start of it — in November he averaged 14 points a game, shot 19.8 percent from three, and struggled with turnovers. After the All-Star break Young averaged 24.7 points per game, shooting 34.8 percent from three, and he was pushing Luka Doncic for Rookie of the Year (Young came in second in that voting).

If he can grow that much in one year, how much can he develop in five years? The Hawks are betting a lot, they are banking that Young and John Collins (No. 24 on this countdown) can be the cornerstones of a contender in Atlanta. Right now they are young stars with All-Star aspirations, and to get the Hawks back to the playoffs. In five years, just making the playoffs should not be near good enough for the ATL.

Young can shoot with range, is a gifted passer, and is working on taking the next steps in his development. He has to get stronger (he reportedly added 10 pounds this summer), has to become a better defender, has to learn to finish better on drives (he needs a floater and to be able to score through or around contact better at the rim, ala Stephen Curry). Most of all, the Hawks need him to be a leader, to be the guy that pulls this franchise back to the postseason, and eventually all the way to heights not seen in decades in Atlanta.

Young has the skills to do all of that, he has the work ethic, and coach Lloyd Pierce is bringing him along at the right pace. If five years, as he is just on the front edge of his prime, we see Young developing into one of the game’s elite point guards. Because we’ve already seen the growth.
—Kurt Helin 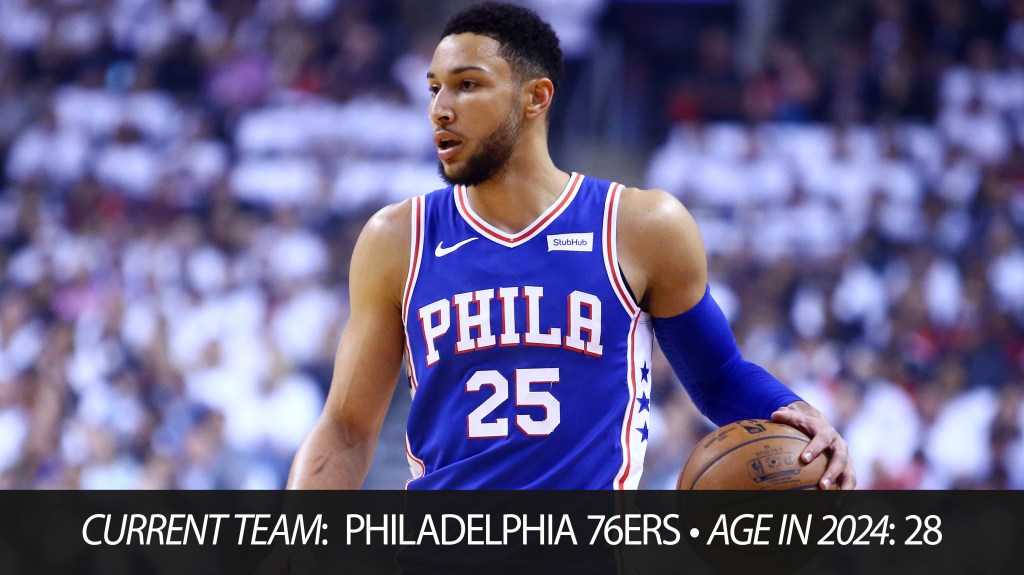 The second-youngest player to average 15-7-7 and shoot 54% from the field:

LeBron James, Magic Johnson, and Wilt Chamberlain are the only other players to achieve that stat line at any point in their career.

Simmons, 23, is a special all-around talent. The 6-foot-10 point guard thrives in the open court. He quickly turns his defensive rebounds into fastbreaks the other way, attacks the basket and zips passes all over the court. His defense is stellar due both to his versatility and lockdown ability.

No wonder the 76ers gave him a max contract extension so quickly.

But he has a huge flaw: Jump shots.

Simmons even attempting a 3-pointer is news. Opponents ignore him on the perimeter, and he’s too uncomfortable to shoot. It bogs down Philadelphia’s halfcourt offense, which becomes an especially big problem in the slower-paced playoffs. It’s so difficult to win with a guard limited like that.

Maybe Simmons will improve. He wouldn’t be the first player to significantly upgrade his jumper while in the NBA. But he’s coming from so far behind. There’s even debate about which hand he should shoot with.

While Simmons is one of the safest bets to be a star in five years, it’s difficult to envision him becoming a superstar. There’s a ceiling on guards who can’t shoot from outside.

Yet, with all the other ways he contributes, Simmons should hit his head on that ceiling.
—Dan Feldman 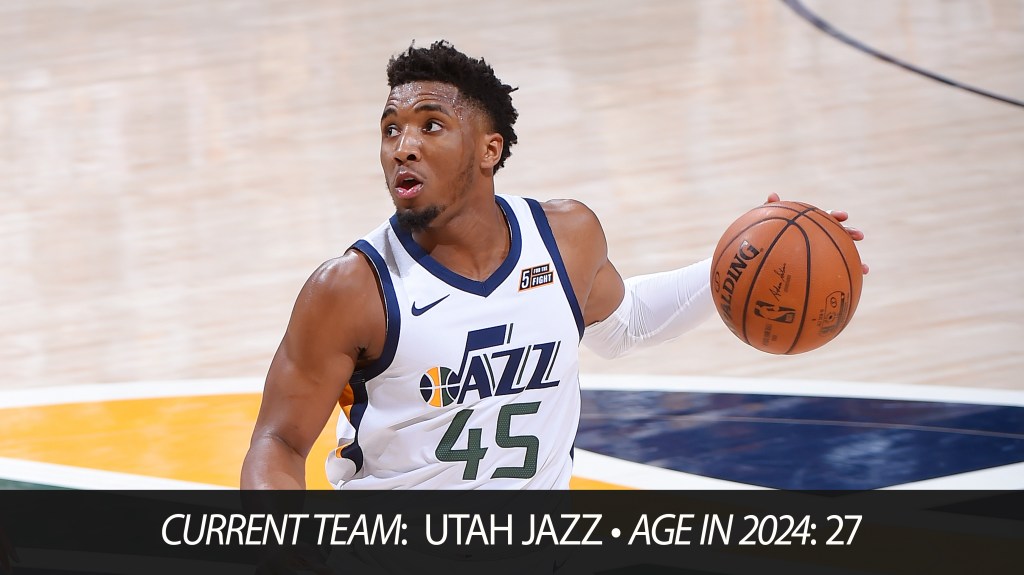 How good has Donovan Mitchell become after just two NBA seasons? It’s all been on display with Team USA this summer, where he has stood out in games and practices, is one of the guys on that roster Gregg Popovich trusts to create shots and get buckets (along with veteran Kemba Walker), and he was named co-captain of the team. At age 22. (The other captains are veterans Walker and Marcus Smart.)

What’s important for Mitchell’s development — and Utah’s future — is that the lessons at Popovich University this summer are not just about things on the court, but about how to be a leader, how to prepare, how to take his game to the next level mentally. Last summer was about injury rehab for Mitchell, this summer has been about growth.

“Last summer was different,” Mitchell said when Team USA stopped in Los Angeles for training camp. “I’m healthy. I’ve been able to travel a little bit, but I’ve been able to put in work. And this is just another step to get better.”

Just how good can Mitchell be in five years? He will be 27, in his prime, and Utah believes he will lead the franchise back to the biggest stages, the ones they have not been on since the Stockton/Malone era. Mitchell this summer is showing he is up to that task, and with the right talent around him — Rudy Gobert will be just 32 in five years (and was No. 32 on this countdown), and in the short term Mitchell will have Mike Conley and Bojan Bogdanovic on his team, too — that is a reachable goal.

Mitchell wants the pressure — he hasn’t shied away from the responsibility of leading Team USA. He is not shy about talking about his goals for the Jazz, which go beyond just making the playoffs again next season. But you can tell he has been at Popovich University this summer, because his words have been about team first, individual second, and doing whatever it takes to win. Bring that mentality back to Utah and Mitchell may lead the Jazz back to that lofty stage they want to return to.
—Kurt Helin 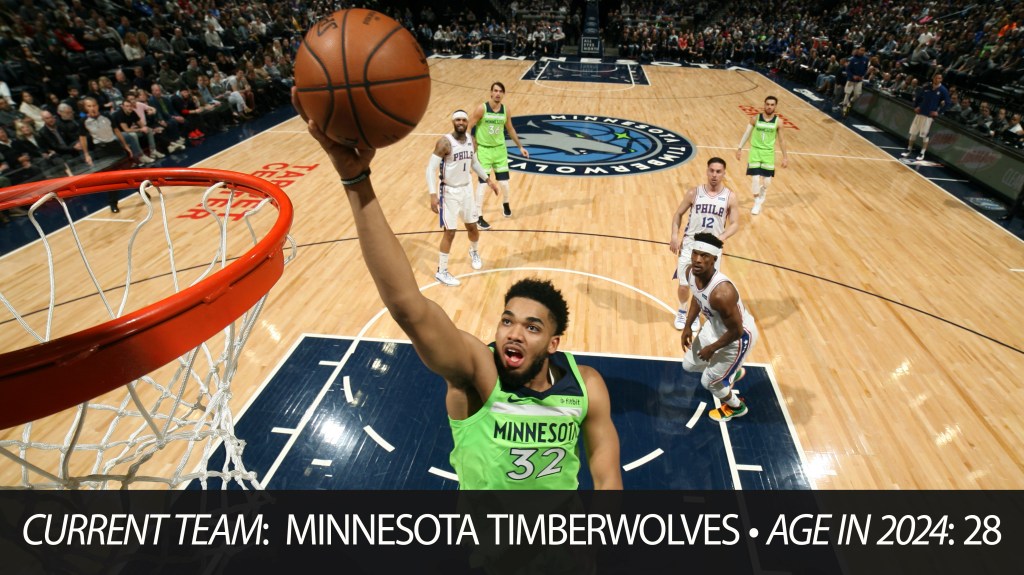 While on the Timberwolves, Jimmy Butler revealed the biggest problem with Karl-Anthony Towns.

“Who is the most talented player on our team?” Butler said. “KAT.”

Towns has all the tools. He’s big, mobile and skilled. The list of 7-footers who’ve shot 3-pointers and scored like him might end at Dirk Nowitzki.

But for all his talent, Towns hasn’t brought the necessary intensity. He has too often failed to assert himself offensively. His defensive effort and execution are consistently lacking. There just isn’t enough force in his game.

Towns started to come around late last season. Maybe that was because of super-max incentives in his five-year contract extension that begins this season. Maybe he legitimately turned a corner for good.

Either way, Towns is just 23. There’s so much time for him to figure this out. He’s already a star with this approach. If he develops a mindset to dominate, he could become the NBA’s very best player.

Towns always says all the right things. In the next five years, we expect him to do even more of them.
—Dan Feldman 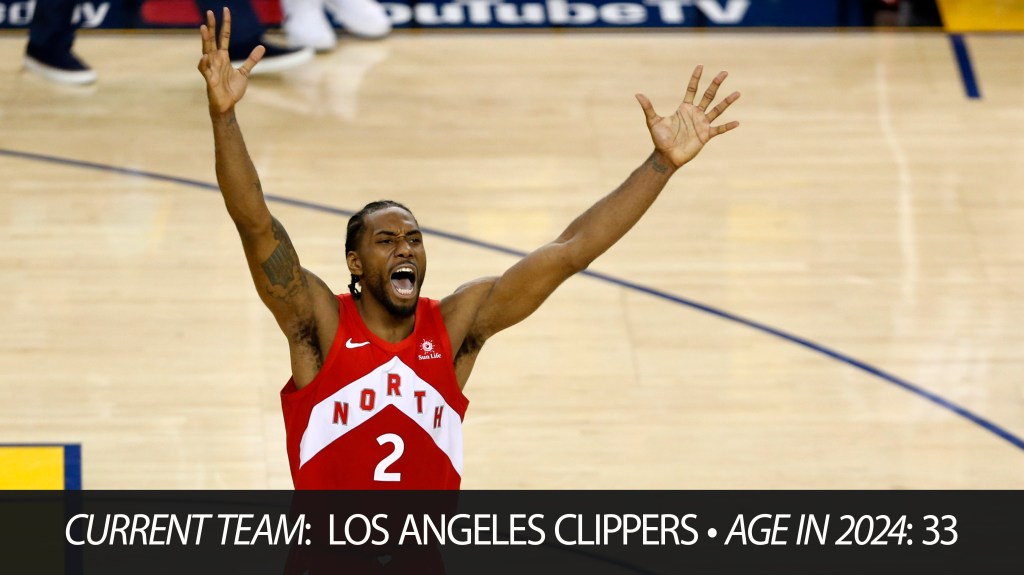 This ranking is a big bet on health.

The question is not, “can Kawhi Leonard be a great player in five years at age 33?” He is an elite NBA talent now in his prime, one that just led the Toronto Raptors to an NBA title averaging 30.5 points and 9.1 rebounds a game in the playoffs. He is as good a perimeter defender as there is in the game right now, something that will not change much as he ages. Offensively he can get his own shot, create for others, he shot 37.1 percent from three last season, but what is most impressive is his footwork and ability to get to his spots on the floor. His mechanical, physical style will age well.

That remains the cloud over Leonard. He played just 60 regular season games in Toronto as the Raptors let him set his own pace to stay healthy from the quadricep tendon issue that cost Leonard his final season in — and relationship with — San Antonio. In the playoffs Leonard was out there every game, but in compensating for his quad there was some pain in his other knee — which he played through and still won Finals MVP. But it raises concerns.

With the Clippers, expect more of the same — Leonard is going to be on a maintenance plan and get plenty of nights off during the regular season. (Between him and Paul George it’s caveat emptor if you buy tickets to see the Clippers.) The Clippers have depth, they plan to make the playoffs and when they get there be a healthy force of nature with a duo of the best two-way wings in the game on the roster, plus a deep bench. For the next few years, the Clippers should be title contenders.

Five years from now? The Clippers could still be contenders if Leonard is healthy. Our prognosticators are betting that he will be, that all the maintenance will pay off — and that Leonard will still be one of the game’s dominant forces. But it’s a bet.
—Kurt Helin