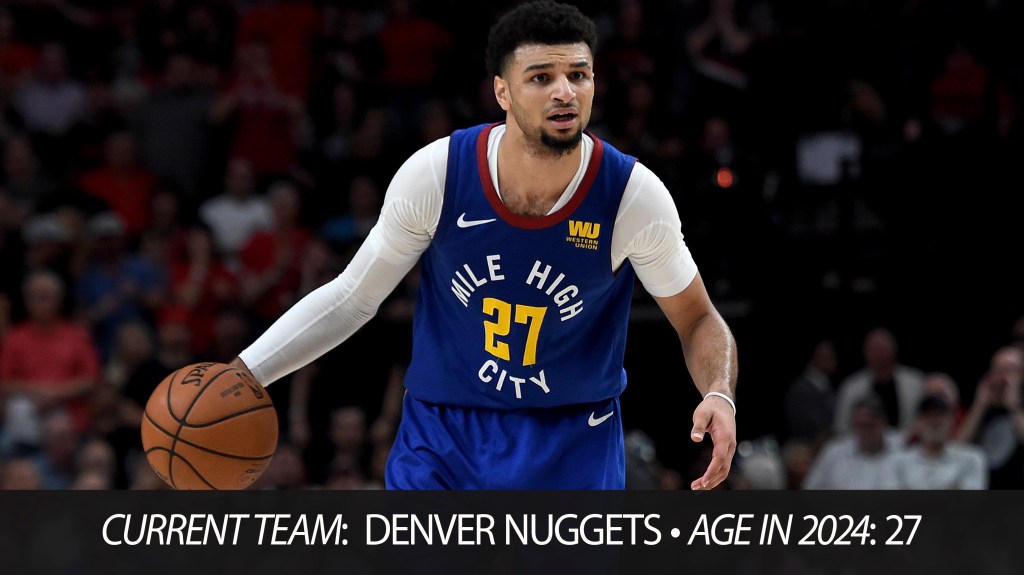 Last season was Jamal Murray’s breakout season. In just his third year in the NBA, he emerged as the second star Denver had been looking for next to Nikola Jokic. In the playoffs he cemented that rise when he stuck the dagger in the Spurs in that series finale, then went toe-to-toe with Damian Lillard for seven games. Casual fans may not have recognized it yet, but Murray was a star — and after the season Denver paid him like one.

Murray averaged 18.2 points a game while shooting 36.7 percent from three last season, plus he added 4.2 rebounds and 4.8 assists per night. He became only the ninth player in NBA history to average 18-4-4 as a 21-year-old (others who did it include Magic, Jordan, LeBron, and Kobe). The key for Denver wasn’t just the scoring threat, although that mattered, but also Murray kept the ball moving and made teams pay for focusing too much defensive attention on Jokic. In the playoffs, Murray upped his game and became the offensive bellwether for the team — when Murray struggled on offense (settling for too many contested mid-range jumpers) the Denver offense stalled out, but when he was confidently draining threes and moving the ball they were hard to stop.

After that season, Denver committed to Murray as their second star and gave him a five-year, $169.7million max contract extension (one that can become a supermax if Murray is named MVP or makes All-NBA, although those are longshots).

That contract was a bet by Denver that Murray can become an All-Star and maybe All-NBA level point guard — something that may be hard to do in the next couple of years because of the ridiculous guard depth in the NBA, but could and maybe should happen down the line. Murray is just 22, is still just tapping into his potential, and in five years will be entering his prime. If he continues to grow and evolve like our prognosticators believe he can, he will be one of the game’s elite guards, and he and Jokic will turn Denver into a consistent title contender.
—Kurt Helin 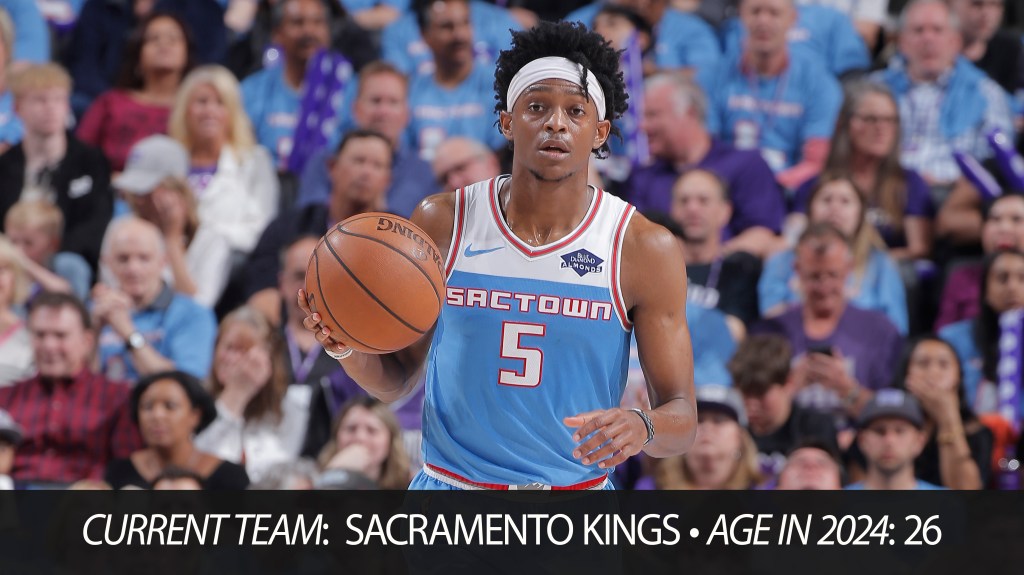 At USA Basketball training camp this summer, De’Aaron Fox left teammates and coaches shaking their head — they knew he was fast, but up close every day in practice it was still stunning. “His quickness is crazy, and his end-to-end speed is ridiculous,” Kemba Walker said. “He’s fast but he’s under control, which is really hard to do. That’s the most impressive thing about it.”

Fox has taken over the mantle of “fastest player with the ball in the NBA,” but his goals are much bigger than a mythical title. He told NBC Sports he was big on setting goals.

“I’m always looking toward the future, individually and I think everybody has to be a little selfish in that aspect,” Fox told NBC Sports. “To continue to grow, to continue to be the kind of player I can be, to put the league on notice that I’m here, I’m established, and just continue to grow as a man.”

Fox has personal goals — becoming an All-Star, to start — plus the team goal of getting the Kings to the playoffs for the first time in 13 years. To get there will take more than just speed, the craft of Fox’s game needs to catch up with that pace. Fox has to become a more consistent defender, for one. Also, last season saw Fox improve his shooting as he adjusted to the speed of the NBA — he finished 68.7 percent of his shots at the rim and shot 37.1 percent from three. Those are good numbers but not elite — Fox needs to be better to reach the next level. At USA camp, it seemed he was getting there. “He has really been knocking it down. That is what is going to take him to that next level,” Walker said of Fox’s jump shot. New Kings coach Luke Walton needs to give Fox the structure and accountability to do all that.

Fox is just 21 and is at the point in his career where he should be making leaps each season. In five years he will be only 26 and entering his prime. Maybe he will not be the fastest player in the league anymore (although he’ll be close) but as the craft of his game catches up with the speed he can be a force in the NBA. The kind of player Sacramento can build around — and ride into the playoffs. To start.
—Kurt Helin 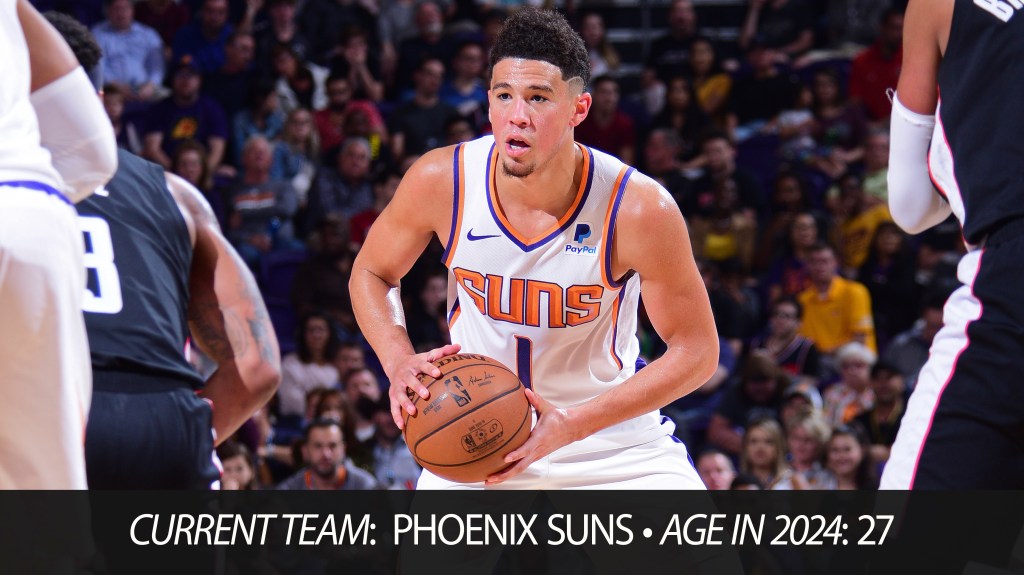 There are two Devin Booker debates:

How good is he?

How good will he be?

The discussions often occur simultaneously between people who don’t realize they’re answering different questions. Everyone just talks past each other. It’s exhausting.

Maybe by 2024, the conversations will converge.

Booker will be in his prime. His potential and output should nearly match. At long last, we’ll see how Booker – anointed before he deserved it, but possessing enough upside to eventually validate his supporters – will turn out.

Booker is an exceptional scorer for his age. Last season, he made real strides rounding out his offensive game – converting from all areas inside the arc, drawing fouls and distributing. He’s ready to be a go-to scorer. His knockdown 3-point shooting also gives him a chance to play a secondary role on a better team if he ever joins one.

Defense remains a huge shortcoming, though. That fits into larger questions about the habits Booker is developing.

Booker has won just 28% of his games with Phoenix. Nobody has lost so much in his first four seasons then become an All-NBA player since the merger. Not the NBA-ABA merger. The BAA-NBL merger. In 1949.

That’s not all Booker’s fault. The Suns have given him awful supporting casts. Last season, they didn’t even bother getting a point guard.

Booker has a lot to learn about the finer points of winning basketball. He’s also extremely talented and young. We’re betting on him figuring it out.
—Dan Feldman 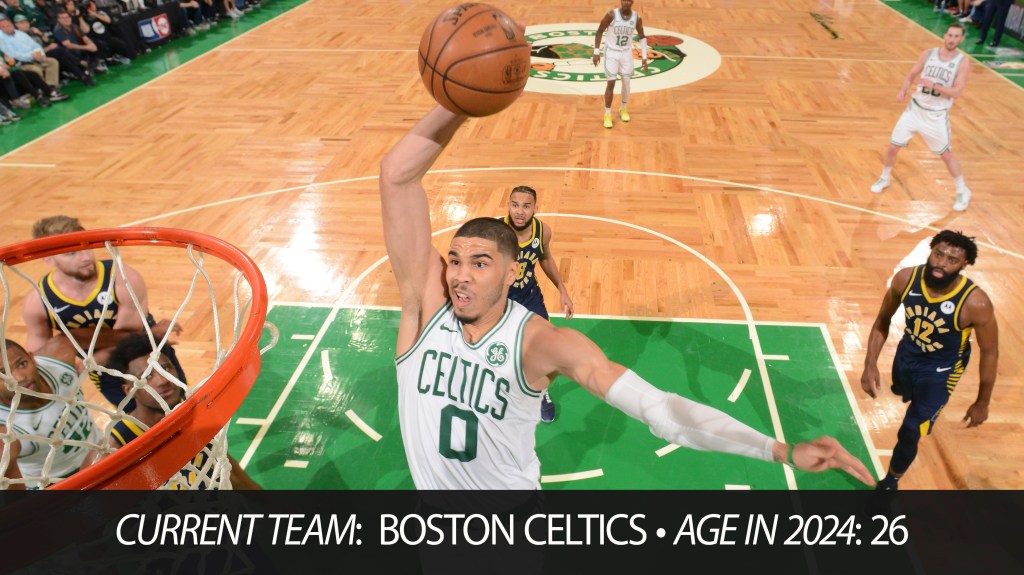 When asked during USA Basketball camp if the Celtics’ disappointing last season seemed to drag down people’s perception of him and his game, Jayson Tatum basically just shrugged. Maybe that was the case, but he was not worried about it. He was moving on.

That moving on includes playing for Team USA this summer in China at the World Cup. In a good sign for Celtics’ fans, in USA practices and scrimmages Tatum has looked more like his rookie-season self — smooth, athletic, and more aggressive. Someone with a complete game. He’s playing with a certain freedom again, not looking over his shoulder. That’s not to say things have gone perfectly — he shot 2-of-11 in the recent exhibition against Canada — but his understanding of the game and willingness to attack seem to be back, even as he works to figure out the FIBA/International game.

Boston needs Tatum to return to his trajectory as an elite player next season. Tatum had an impressive rookie season that had him looking like a franchise cornerstone (especially in the playoffs when he averaged 18.5 points a game and was a quality shot creator). However, he plateaued in his second season, likely in part due to the failed chemistry experiment the Celtics became. Tatum got hung up in that, not moving the ball and taking poor shots at points.

The USA experience and time with Gregg Popovich will help Tatum (and Jaylen Brown) move on from last season, there’s a lot of basketball knowledge to soak up. Tatum is just 21 and we expect him to get back on his trajectory to stardom, to grow into an elite NBA player with an all-around game that is hard to match. He is maturing, his game and shot selection are maturing along with him, and by the time we get to five years down the road Tatum will be entering his prime as one of the games elite players.
—Kurt Helin 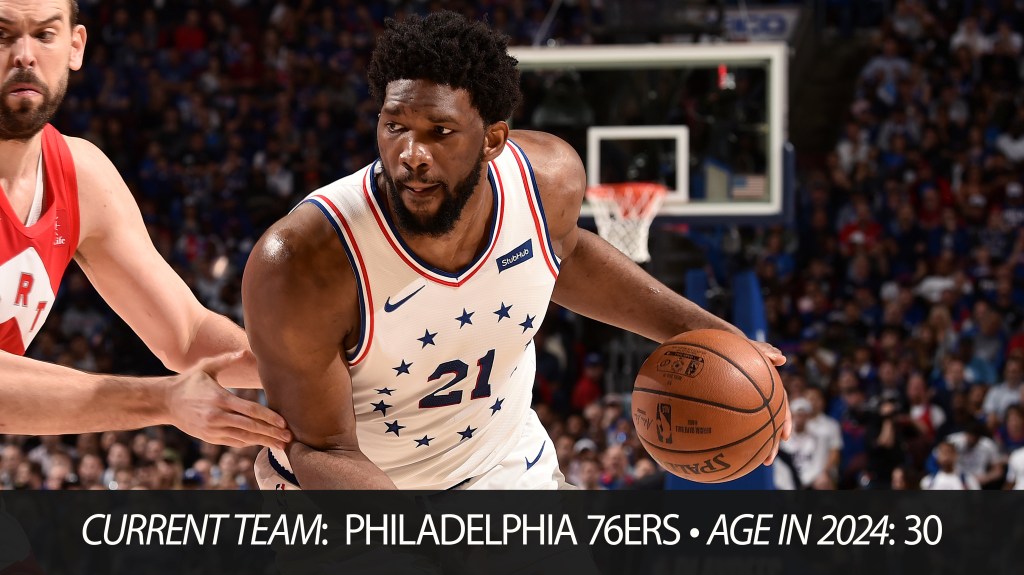 It’s been five years since Embiid was drafted No. 3 overall and boy, does it feel more like fifty. So much has changed, not just with the 7-foot Cameroonian phenom, but the world around him. The Process is over and now we try to make sense of what is clearly this generation’s Shaq.

Embiid’s winding road, fairly or unfairly, makes projecting him difficult. No matter how many 30-15-5 nights Embiid puts up, it’s hard to put aside the injury variable that delayed his NBA career two years. With two surgeries on his navicular bone and nagging knee issues on that enormous frame, there’s no doubt that Embiid’s health record keeps him outside of the top-10.

Because if we look at Embiid’s age, talent and production, he should be much closer to the top, if not right at the top. At 25 years old, he’s at the front edge of his prime. He just averaged 27.5 points, 13.6 rebounds, 3.7 assists while making over 100 jumpers outside 16 feet. There’s almost nothing he can’t do on the basketball court.

He’s getting smarter, too. Last season, he became the first 7-footer in NBA history to take at least 10 free throws a game and shoot over 80 percent at the line. Using the charity stripe to your advantage is usually the domain of highly-technical shooting guards like James Harden, Kobe Bryant and Michael Jordan. Embiid is as surgical as they come and not in the way that defined his first two years in the league. If he can keep the injury woes away, we’ll probably look back wondering how we didn’t put him No. 1.
—Tom Haberstroh