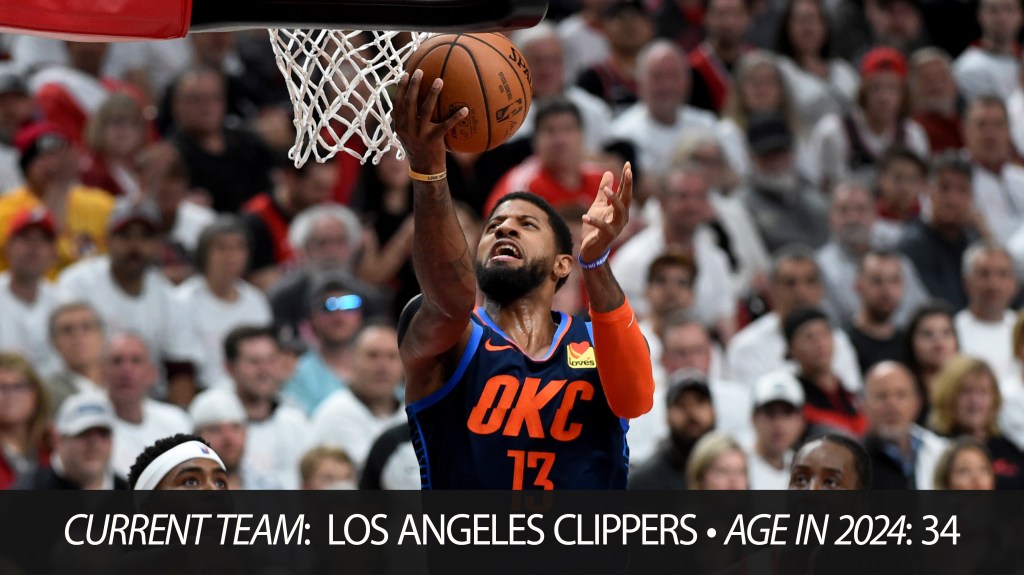 The fact that we’re even talking about Paul George being on an NBA court — let alone a guy who finished third in the MVP voting last season — is a testament to modern medicine and his work ethic in rehab. His Team USA leg injury five years ago could have ended his career. Now that career has come back home to Southern California where he and Kawhi Leonard have completed the transformation of the once laughing stock Clippers into title contenders (and probably favorites heading into the next season).

George is a complete player on both ends in his prime now, but with a game that should age well so that he is still a significant contributor at age 34 in 2024. Last season he scored 28 points a game for the Thunder, shooting 38.6 percent from three, grabbing 8.2 rebounds a game, dishing out 4.1 assists per night, plus being one of the better and more physical wing defenders in the NBA. If those numbers slip some in the next half-decade, he’s still contributing a lot. It’s his play on that defensive end of the court that, while it likely will drop off some in five years, keeps him high on this list — George is going to be a guy a coach can throw at the other team’s best perimeter player in 2024 and still get results. That skill matters.

The biggest factor in the equation about how good George will be in 2024 is health — George had surgery on both shoulders this offseason, and he has certainly had injuries in his past. Fluky ones, but injuries nonetheless. How well will his body hold up and lets him play his old-school style game will determine his value.

But in five years, George is still going to be good. Maybe very good. And he’s going to help some franchise win a lot of games.
—Kurt Helin 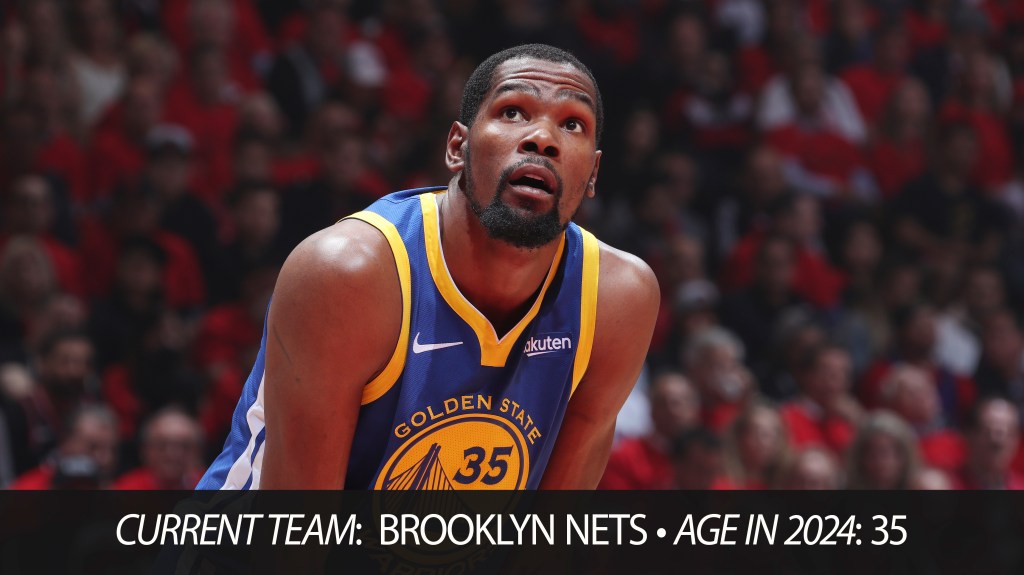 At times in the last couple of years, Kevin Durant seemed bored. He was a great player who joined a great team and made it even more dominant. There was little perceived suspense in the championship chase. Many just ceded the title to the Warriors. So, Durant worked on expanding his individual game, tinkering with different skills.

That luxury is gone now.

Durant is on the wrong side of 30 and has a torn Achilles. He left Golden State and his multi-star supporting cast for the Nets. Neither individual nor team success will come so easily.

In the next five years, Durant has a chance to reshape his legacy. He’ll never completely shake taking the easier route to a title with the Warriors. But if he plays a leading role in a Brooklyn championship, even with Kyrie Irving also starring, that’d prove he can elevate a team to that level.

By 2024, he’ll almost certainly be well past his prime. If Durant’s history of injuries compound, he could be finished well before this. But even with the torn Achilles likely accelerating his downfall, he’s declining from an extremely high peak. His shooting, handles, size and fluidity give him a chance to age gracefully.
—Dan Feldman 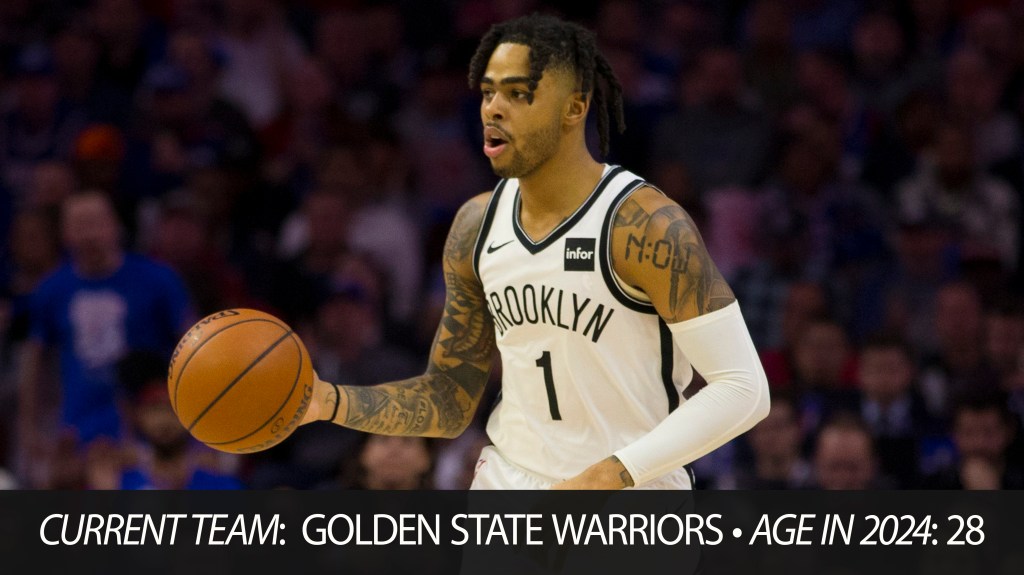 One year ago, would D’Angelo Russell have made this list? Maybe, he would have been in consideration, but if he did, he certainly would not have been this high up on it.

That’s the kind of leap Russell’s game made last season, one large enough that the Golden State Warriors were comfortable offering him the four-year max this summer (the most they could do in the Kevin Durant sign-and-trade). Russell earned his max averaging 21.1 points and dishing out seven assists per game while shooting 36.9 from three last season in Brooklyn. Numbers that made him an All-Star. His game is all about hesitation, starts and stops that throw defenders off, combined with fantastic court vision that lets him find the open big man rolling to the rim or the open shooter in the corner. Last season his assist percentage went up and his turnover percentage dropped.

However, what really changed last season is Russell’s shots started to fall. In particular, he shot a lot better from floater range and from three — now he was a threat to score, not just pass, and it opened everything up.

Russell also matured as a person, setting the stage for him to be a leader in Brooklyn and the kind of player other teams want in their locker room. The Laker version of Russell was not that guy. He’s grown up, he and his game have matured, and Russell should take Kenny Atkinson to dinner because the professionalism and slow-and-steady growth Russell learned in Brooklyn got him that max contract.

Russell will be in his prime in 2024, at age 28, and those shooting and passing skills should be heightened. He could use to become a guy who is grittier on defense (he still gets hung up on picks) and more willing draw contact when he drives, but Russell is an All-Star point guard living up to the promise of being the No. 2 pick. In his prime, he’s going to win some team a lot of games in 2024.
—Kurt Helin 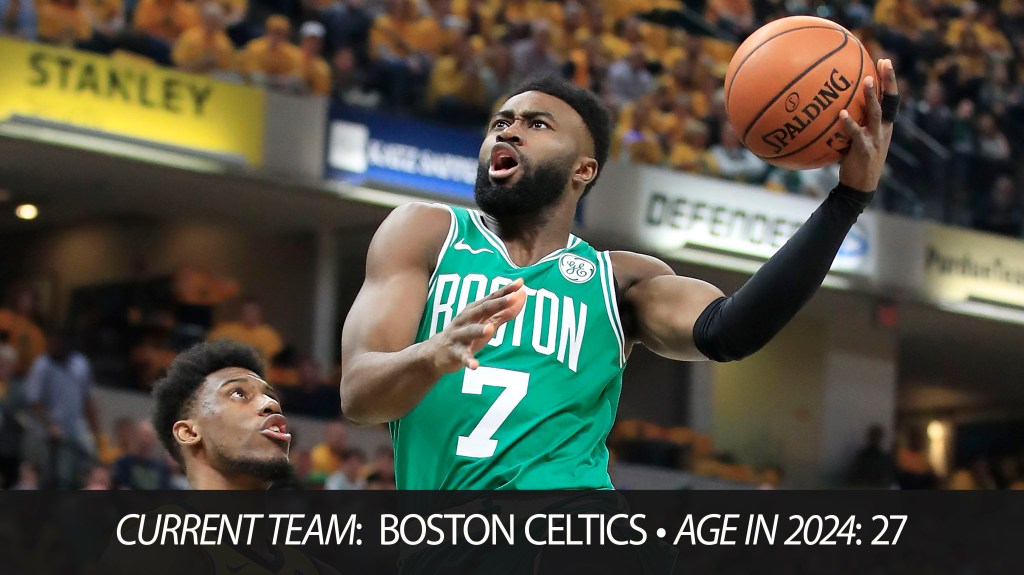 What stood out watching Jaylen Brown when USA Basketball training camp came to Los Angles last week was that he was playing freely and aggressively. Like the Jaylen Brown of a couple of seasons ago, the one from the conference finals playoff run, not the cautious guy hesitating and looking to find his space at the start of last season.

Brown was among the numerous young players who struggled in Boston last season when Kyrie Irving and Gordon Hayward returned and changed the dynamic. Rather than take the expected leap forward in his third season, Brown’s start slow — 40 percent shooting overall and 25 percent from three the first 20 games — eventually cost him his starting spot. Brown had to adapt to coming off the bench.

Brown adjusted to that role and by the end of the season and was one of Boston’s few bright spots — after the All-Star break he averaged 13.8 points per game with a 59 True Shooting Percentage.

Brown may have found his groove again, but this is still a team with Marcus Smart starting at the two and Jayson Tatum and Gordon Hayward on the wing, all ahead of Brown on the depth chart. Brown is going to have to earn his run on this roster.

Was the reason for Brown’s plateau last season the chemistry issues around Irving? If so, will the “put his arm around you and run with you” style of leadership Kemba Walker brings to Boston help Brown make the leap we expected a season ago? Or, were expectations of Brown as an All-Star player too high?

This coming season will start to give us our answer. However, watching him this summer, Brown looks like a guy ready to take that step up. The NBCSports prognosticators believe Brown is going to come close to reaching his ceiling now, not fading away, which is why he is this high on the list.
—Kurt Helin 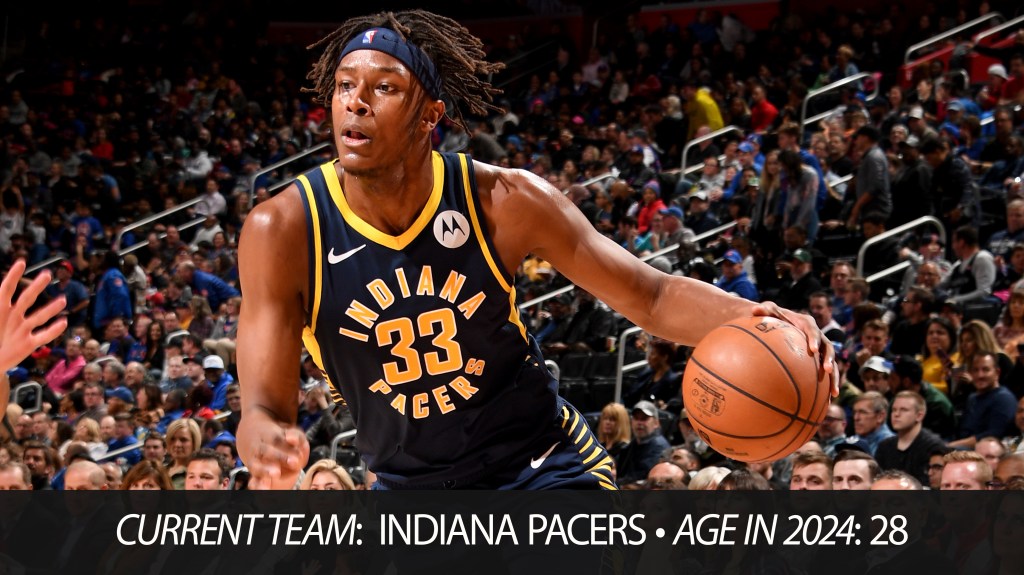 Myles Turner feels poised for a breakout season. At least in the eyes of fans. While he has gone underappreciated nationally the folks at USA Basketball saw what Turner had become and put him on Team USA this summer.

Here’s what I like best about Turner (and Pacers/USA fans should, too), when I asked him about his game in five years, personal goals and getting a brighter spotlight, he always tied that back to team success.

“With the whole world watching (the FIBA World Cup) it’s a chance for me to go out and show a little bit of what I can do, but it’s not about that,” Turner told NBCSports.com in Los Angeles, while USA Basketball trained there. “It’s about sacrifice at this point. We’re here, you’ve got to sacrifice. You’re not going to be able to play 30 minutes a game, shoot the ball 20 times a game, you have to come out here and play within a role.”

In his role with the Pacers Turner made a leap last season. He led the NBA in blocked shots at 2.7 per game and had more blocks (199) than the entire Cleveland Cavaliers team (195). Plus Turner shot 38.8 percent from three. He evolved into an All-Star level center and a guy who was fifth in Defensive Player of the Year voting (that award voting always seems to be about a year behind what is happening on the court).

The Pacers’ big man is just 23 and in the past couple of seasons has found his rhythm in Indiana, in a rotation with Domantas Sabonis. Turner said he sets his goals one season at a time, but he’s set his sights high.

“Defensive Player of the Year is a big goal of mine, I want to obtain that by any means necessary,” Turner said. “All-Stars, obviously, that’s on everybody’s list of things to do. And just getting out of the first round of the playoffs, I’ve been in the league four years now and been to the first round every year.”

Turner’s defense is his calling card, but what gets him into the All-Star games and on All-NBA teams will be continued improvement in his offense — keep knocking down threes, take fewer long twos (although he hit a respectable 41.1 percent of them) and improve his passing to rack up assists as defenses start to adjust to him.

In five years, when Turner is at his peak at age 28 in 2024, he could be one of the top few centers in the NBA. An anchor of a very good team — one that makes deep playoff runs. Nothing needs to change, stay on the course he is on and the recognition — and wins — will come.
—Kurt Helin