Jeremy Lin is having a hard time finding work in the NBA. Lin broke down the other day, saying he’s felt as though he hit rock bottom.

Lin can still be a useful third PG it seems. According to Synergy, he ranked as “Very Good” at his position both in the pick-and-roll game and in transition, two play types that made up 64 percent of his possessions last season.

But it’s late July and Lin still doesn’t have a team. Point guard is a position many teams still need to fill, and you’d think at a veteran’s minimum Lin would be enticing to teams like the Phoenix Suns, Orlando Magic, Portland Trail Blazers, etc.

Meanwhile, former NBAer Nate Robinson has another idea for Lin: play in The Big3. 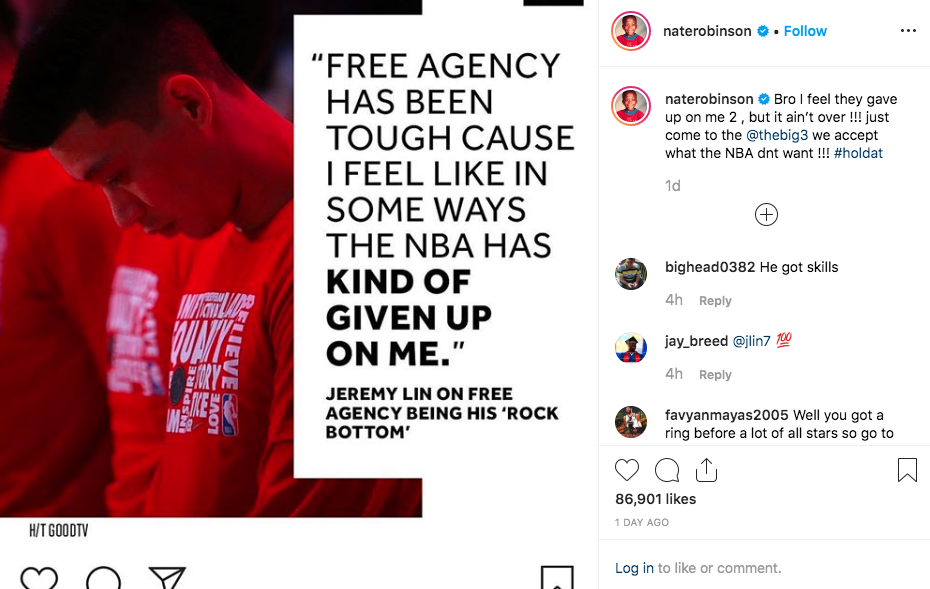 Lin could certainly go to The Big3, but he still has NBA talent and he will be just 31 by the time next season starts. He’s not going to win you any games on defense, but as a third point guard and 14th or 15th man, it does feel a little odd there’s nothing out there for him. Perhaps his asking price is too high? Lin did play for the minimum last year, and unless his agent has other ideas, that’s where he’s going to be the rest of his career.

Maybe this saga will end soon enough, and Lin will find a team. If not, we know that Nate Robinson always has a spot for him.