The Warriors were determined not to let Kawhi Leonard beat them.

Philadelphia and Milwaukee had failed to do just that and they are now home watching these games on television like the rest of us. Leonard has been the best player these playoffs — making his case for “best player in the world” — but Golden State had a plan: trap him off screens, send double teams, and try to force the ball out of his hands. Make someone else beat you. It kind of worked, Leonard had 23 points but shot 35.7 percent and had five assists on the night. He did not dominate.

Except the other Raptors did beat them.

Those Raptors — the guys without a Finals MVP trophy at home — stepped up and shot 54 percent. That was led by Pascal Siakam, who finished with 32 points on 14-of-17 shooting, and was the best player on the floor — on both ends.

When the Spice hits ya hard 🌶️ pic.twitter.com/c7ZOrsQpXm

As a team, the Raptors shot 39.4 percent from three. More importantly, they continued to play lockdown defense in the halfcourt.

That was enough for Toronto to lead almost from the opening tip and win an entertaining Game 1 at home, 118-109, in front of a raucous crowd.

Toronto now leads the series 1-0. Game 2 is Sunday in Toronto.

This was the kind of win that should boost Toronto’s confidence that they can take this series.

The Raptors did it without their best player needing to take over, because they moved the ball and played as a team.

“They were blitzing Kawhi on the pick-and-roll and allowing the middle of the floor open or they were switching early on the offense,” Marc Gasol said. “We did a good job of moving that ball and finding — I still think we can do a better job on it, but it was good enough.”

Gasol had 20 points on 10 shots and played spectacular defense, showing the Warriors were not just going to play him off the floor as they had done so many bigs before. The Raptors got guys like Danny Green hot again, he was 3-of-7 from three on his way to 11 points.

Part of the Warriors halfcourt struggles were they turned the ball over, which gave Toronto some easy transition buckets.

“The biggest thing for me was our transition defense was just awful and that’s the game,” Warriors coach Steve Kerr said. “That’s the No. 1 priority when you play Toronto, you have to take care of their transition and we gave up 24 fast-break points, we turned it over 17 times. So that’s the game, really.”

Coming off a nine-day layoff, the Warriors are rusty to start, scoring just 21 points in the first quarter on 7-of-23 shooting overall and 3-of-10 from beyond the arc. Shots the Warriors traditionally hit did not fall, and Toronto did a good job contesting Golden State’s actions. The Raptors, however, didn’t take advantage and only up by four after one quarter, 25-21.

That Toronto lead stretched out to 10 at the half — 59-49 — in large part because of Gasol, who had 14 points in the first 24 minutes, hit threes, set solid screens, plus played fantastic pick-and-roll defense showing out high and cutting off angles.

While Leonard and Lowry struggled in the first half (3-of-12 combined) the other starters were 12-of-19, and the Toronto bench shot 5-of-10.

Meanwhile, the Warriors struggled with the combination of impressive Raptors defense and rust. This was their first-half shot chart. 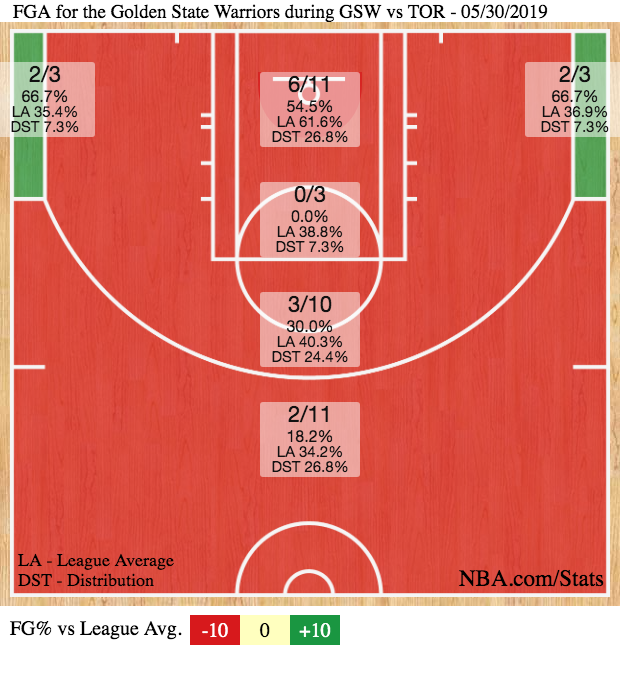 The Warriors never put together the kind of run we have come to expect from them, even in the third quarter, and the Raptors deserve credit for that.

“I think the big thing is you got to continue to play defense all throughout the game,” Toronto coach Nick Nurse said. “Even though you’re trying really hard sometimes and they will come down and they will make you look silly sometimes…. We just said that some of those breakdowns will happen… You get a shot and you try to answer, and you try not to have any droughts on offense, because you know their ability to score quick.”

The Warriors defense also was not sharp at points, with slow closeouts to shooters or allowing cutters to go unguarded in the paint. Toronto was recognizing it and took advantage.

The Raptors were the sharp and better team all night. They earned a 1-0 series lead.