The NBA playoffs are in crunch time and there can be a lot to unpack in a series of intense games, to help out we will give you the three things you need to know from the last 24 hours in the NBA.

1) Physical Nuggets push Trail Blazers to edge of elimination with blowout Game 5 win. Portland coach Terry Stotts tried to shake things up defensively at the start of Game 5, putting Al-Farouq Aminu on Nikola Jokic — to handle Jokic on the perimeter better and switch the pick-and-roll with Jamal Murray — and put Enes Kanter on Paul Millsap down on the block.

Like everything Portland did in Game 5, it didn’t work.

Millsap had his best game of the series scoring 24 points on 9-of-17 shooting, while Jokic battered Aminu and shot 8-of-10 within 8 feet of the rim on his way to 25 points and 19 rebounds.

Denver routed Portland 124-98 to take a commanding 3-2 series lead. Game 6 is Thursday night in Portland and it’s win or go home for the Blazers.

“We’ve played our best basketball with our backs against the wall,” Damian Lillard said postgame, searching for a bright spot.

This has been an all-offense series, but the Trail Blazers could not knock down shots on Tuesday night. Credit the Denver defense a little, but this was just more of an off night for a Portland team that had an offensive rating of just 85.5 through the first three quarters of this game, the only competitive part. Here is Portland’s shot chart through three: 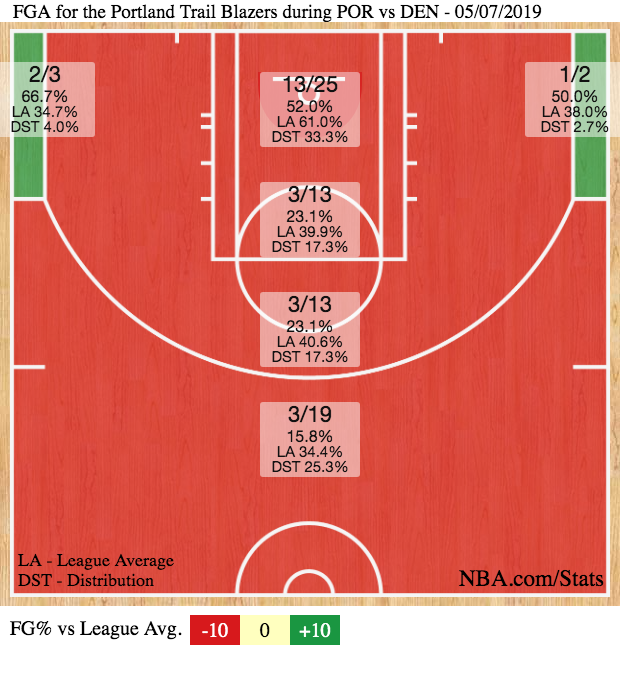 There’s not a lot for Portland to take away from this game, other than maybe going back to their original defensive matchups. It was just one of those nights.

Portland fans just need to hope Lillard is right about the Blazers with their backs against the wall. They can also hope Denver plays another terrible Game 6 — they were overwhelmed by the closeout moment against San Antonio and lost by 17 (despite 43 from Jokic).

If not Portland’s season will end with a lot of “what if we just had Jusuf Nurkic” thoughts running through their heads.

2) Toronto dominates Philadelphia, and it wasn’t even Kawhi Leonard that had to do the heavy lifting. We could go into detail about how Toronto dismantled Philadelphia in Game 5, or, you could just let Sixer coach Brett Brown’s face tell the tale.

Or, you could watch Drake and Raptors fans troll Joel Embiid with the airplane celebration Embiid used during the Sixers’ Game 3 win.

Embiid, who was a game-time decision with an upper respiratory issue, clearly was not well and not himself on the court, finishing with 13 points and 8 turnovers, Plus this happened to him on defense.

Toronto won 125-89 in a game that was not in doubt after halftime. Game 6 is in Philadelphia Thursday.

It wasn’t just a bad night for Embiid. Ben Simmons was a non-factor and had 7 points on the night. J.J. Redick had 3 points and only six shot attempts. Jimmy Butler was the best player for Philly and finished with 22 points on 16 shots, but when he went to the bench the team fell apart.

Toronto got a team effort. Pascal Siakam had 25 points and was back to his healthy self. Kyle Lowry had 19 points on 5-of-9 shooting. Danny Green had 17 points and was 5-of-7 from three. Off the bench, Fred Van Vleet had his best game of the series. And Leonard pitched in 21.

When Embiid isn’t right, the Sixers are not the same. Philadelphia needs to hope he is healthy and things look different Thursday night, or the off-season questions about this roster — and how a once asset-rich team traded all of them to get this group and win now — and what it will look like next season will start.

3) Denver coach Mike Malone speaks on horrific school shooting near Denver. One 18-year-old is dead and eight others were wounded in the latest school shooting to hit our nation, this time at a STEM school in the Denver suburb of Highlands Ranch.

Before Game 5, Nuggets coach Mike Malone spoke for a frustrated nation saying “thoughts and prayers are never enough” and wanting to see action.

Our thoughts are with the victims and their families, even as we know that is not enough. We all know that more needs to be done, not to arm the schools but to get to the root of the problems that have made these kinds of shootings a national epidemic. There is no one, simple answer that solves everything, but we need a serious, genuine national discussion of how we stop this from happening. Not just deterrence, but an honest and unflinching look at the causes and solutions.