This is why the Toronto Raptors got Kawhi Leonard.

Leonard was the best player on the court Saturday night in Game 1 against Philadelphia, scoring 45 points on 16-of-23 shooting, grabbing 11 rebounds, and dominating defensively with plays like this.

Kawhi with the block 🚫
Siakam with the flush 🔨#WeTheNorth | #NBAPlayoffs pic.twitter.com/9BnTc8Ur5Q

Behind Leonard’s play and the Toronto starters outplaying the Philly starters, the Raptors raced out to an early lead, held off charges, and when things got tight played like a team who had largely been together for a while — not adding players through trades during the season — on their way to an easy 108-95 win.

So much for that Game 1 Toronto curse. Leonard smashed that.

This was domination in the critical areas of the game and the series by Toronto. It wasn’t just Leonard, Pascal Siakam had 29 points on 12-of-15 shooting, and the two of them dominated the first quarter, helping Toronto shake off those Game 1 jitters. On the night, Leonard and Siakam shot a combined 28-of-37.

The other key thing — right at the top of our “three things to watch in this series” preview — was Marc Gasol keeping Joel Embiid in check. For the game, Embiid shot just 5-of-18 and got to the free throw line only six times. When he is not a force inside the Sixers offense is not smooth, and that was the case in this game. Toronto didn’t match Gasol with Embiid all game, Serge Ibaka got time on Embiid and the Sixers didn’t take advantage of that and pound Embiid in the post (but they likely will try in Game 2).

Philly had stretches of good offense, but this is not the kind of shot chart that leads to wins. 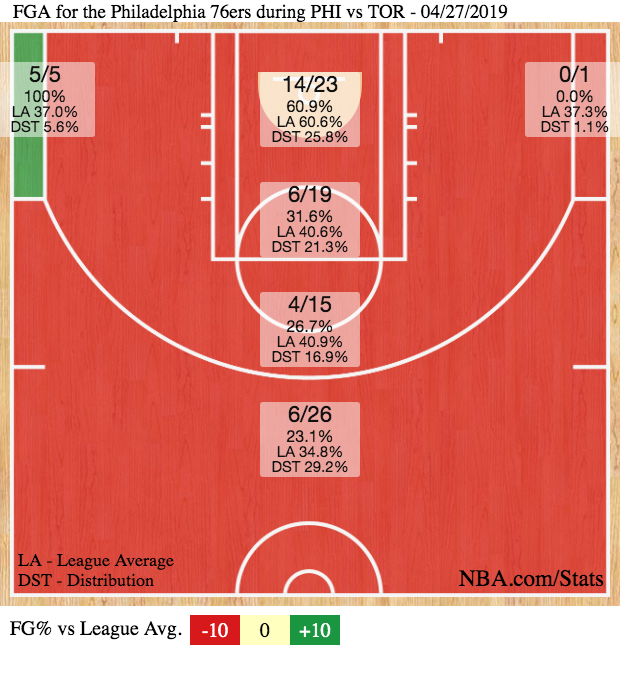 J.J. Redick led Philly with 17 points as no player got above 20.

All game long the Raptors also did a good job of pushing the pace, particularly against the Sixer bench units, to get some easy buckets before the defense got set.

The Sixers closed the gap to one in the second quarter, but Leonard came back in and stretched the lead back out, 62-53 at the half. Leonard had a career-best 27 first-half points in a playoff game.

It was like that all game. Toronto’s defense made plays when it mattered but Philly’s offense still had impressive stretches, it just couldn’t get stops.

If that doesn’t change for Philadelphia, this series will be a lot shorter than they imagined. We will see how the Sixers respond to adversity now.