1) Pressure? What pressure? Veteran Spurs step up, shoot San Antonio into Game 7 vs. Denver. It’s why San Antonio was a trendy upset pick in the first round against Denver: Experience. Guys they could trust in the clutch who would step up and make plays, and a coach in Gregg Popovich who would put them in positions to do just that.

Backs against the wall in Game 6, the Spurs experience mattered.

LaMarcus Aldridge had 26 points on 10-of-18 shooting, changing his strategy to attack more by facing up on Nikola Jokic. DeMar DeRozan added 25 points on 12-of-16 shooting. Rudy Gay came off the bench for 19 points on 7-of-11 shooting. The veterans took advantage of a soft Nuggets defense and just destroyed them from the midrange — look at this shot chart. 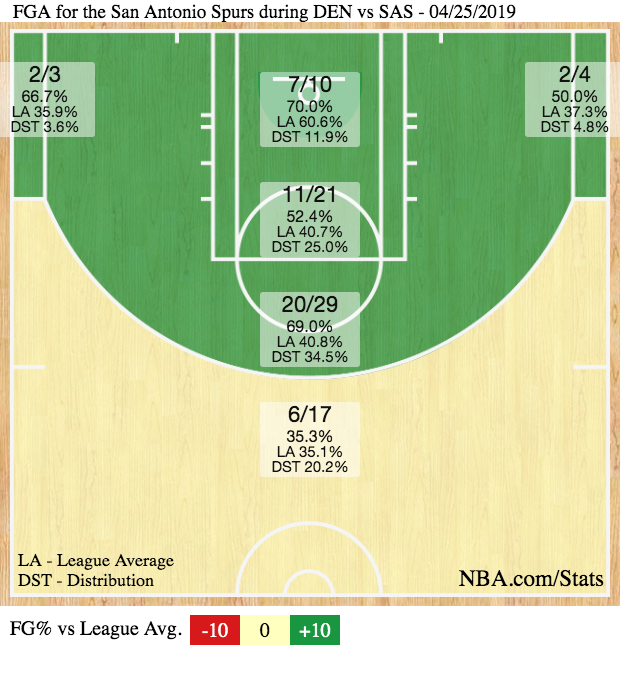 The end result was a 120-103 San Antonio win on their home court. It forces Game 7 Saturday in Denver.

The other key to this win was the San Antonio defense, and the strategy behind it. Jokic and Jamal Murray had success with a two-man game (a lot of pick-and-rolls) and the Spurs lived with that, not helping off shooters to defend the actions. The result was Jokic had a career-high (and Nuggets franchise playoff high) 43 points, doing that in 30 shots. He was a beast on the night.

However, Jokic and Murray combined to take 51 percent of Denver’s shots, up from 34.6 percent and 40.5 percent in the previous two wins — the ball movement and transition buckets that characterize the Nuggets offense were missing. Denver was taken out of its flow.

In Game 7, can that Spurs defense again take the Nuggets out of rhythm, or will the Nuggets role players feel more comfortable and shoot better than 25 percent (6-of-24) from three? It’s one game, anything can happen, and usually one unexpected player ends up being the star.

It’s good we have at least one game seven in the first round.

2) RIP John Havlicek, a basketball legend and true Celtic. John Havlicek left a heck of a legacy on the court — eight NBA titles (8-0 in the Finals), 11-time All-NBA, eight-time All-Defensive team, 13-time All-Star, Hall of Famer, probably the greatest sixth man the game has ever seen.

What matters more is his legacy off the court, where former teammates and everyone who interacted with the man praised him.

Hondo passed away Thursday at the age of 79. The love that poured in for him was genuine, and the thoughts about his game secondary.

It is getting difficult each time I hear about another contemporary that passes! What is harder is when we lose guys like John Havlicek, he was not just a teammate & a great guy, but he was family. That is how our @celtics teams were. #RIP Hondo @NBA #RIPJohnHavlicek @NBAonTNT pic.twitter.com/VP9MGPjrmZ

I cannot come up with words to describe what we lost with the passing of John Havlicek. I can only assure you that everything you hear or read about what a genuinely good man he was is true. He was what we hope our heroes can be. @nba @celtics

Just spoke with Jerry West on the passing of John Havlicek. "The thing with John, he competed against you at the highest level and he wanted to win badly," West tells ESPN. "But he was always a really nice person. I don’t think that I ever heard anyone say a bad word about John."

“John Havlicek was a wonderful friend who represented the best of the NBA,” NBA Commissioner Adam Silver said in a statement. “He described himself as a man of routine and discipline – a humble approach that produced extraordinary results, including eight NBA championships with the Boston Celtics, 13 All-Star selections and some of the most iconic moments in league history. A trusted teammate who prioritized winning, John’s passion and energy endeared him to basketball fans and made him a model for generations of NBA players. We send our deepest sympathies to John’s wife, Beth, his son, Chris, and his daughter, Jill, as well as the entire Celtics organization.”

3) Houston will be in Bay Area before Warriors/Clippers Game 6 ends. There is another Game 6 on Friday night, the feisty Los Angeles Clippers — and their pick-and-roll combination of Lou Williams and Montrezl Harrell — will try to force a Game 7 against the championship favorites, the Golden State Warriors.

Friday the Rockets are flying up to the Bay Area to get comfortable and rested before the series with the Warriors — before Game 6 is even. Tim MacMahon of ESPN first reported this.

It’s more about the league’s scheduling than the Clippers. If the Warriors win Friday (Golden State is a 10-point favorite), then the Rockets/Warriors series starts on Sunday. Steve Kerr can thank the Television Gods that run NBA playoff scheduling that gives his team just one day off to prepare for the Rockets.

The Rockets, wisely, want to be ready for the most likely outcome, which means a game on Sunday.

The Warriors admitted they were complacent in Game 5 at home, expecting to win and defending like they thought a win was their birthright. One would think blowing a 31-point lead at home earlier in the series would have taught the Warriors a lesson about underestimating the Clippers — this team is hard not to like, with its energy, passion, and Williams getting buckets — but the Warriors racked up a lot of bad habits during the regular season and they have not been that easy to shake through five games.

The Clippers have been surprising teams and spoiling plans all season long. They may do it to the Rockets, but Houston wants to be prepared for what we all know is coming — the defacto Western Conference Finals. Which probably start Sunday.