Russell Westbrook has faced a lot of criticism this season, a chorus that grew louder in the first round of the playoffs.

While he averaged a triple-double for the third straight season, his shooting degenerated and his efficiency dropped. This is Westbrook’s shot chart for the regular season. 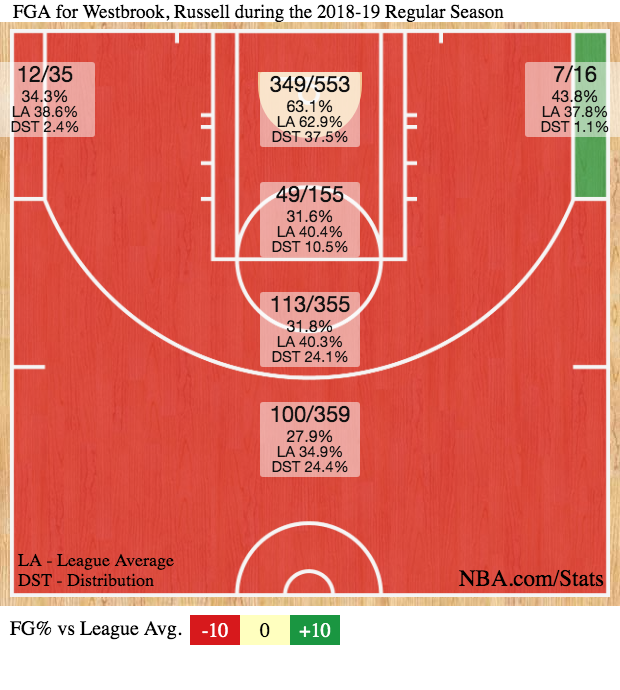 Which was better than his playoff shot chart. 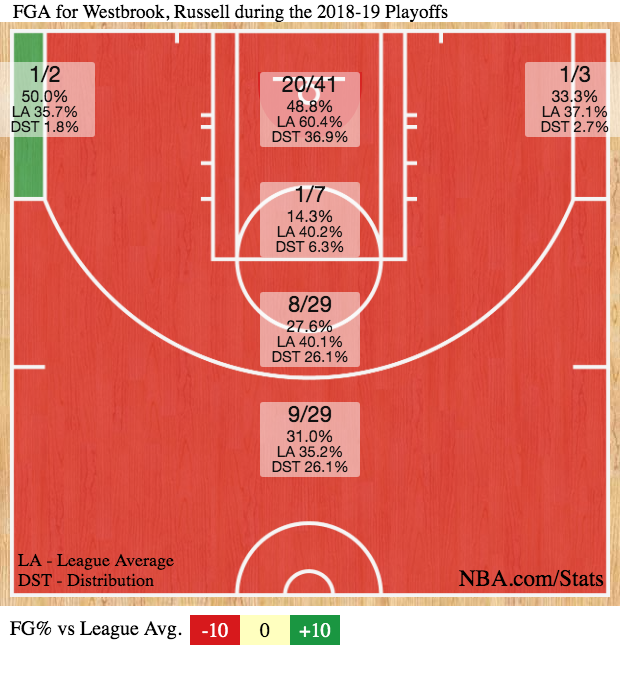 The results of his shooting woes were obvious in the playoffs. Portland big man Enes Kanter can be exposed as a pick-and-roll defender if pulled out on the perimeter to deal with a ball handler, but the Trail Blazers didn’t have to do that. Kanter would sag back, clog the paint, and dare Westbrook to take jumpers or drive past him. Even when Westbrook drove there were not clear lanes and he struggled to finish.

That swelled the volume of criticism of Westbrook. Not that he cares. Did anyone actually expect him to be bothered? Westbrook brushed off his critics speaking with the media after his exit interview on Thursday. Via Royce Young of ESPN.

“There used to be conversations if I was a ball hog, but now I lead the league in assists for the past three years or whatever it is, that’s getting squashed out,” he said. “So now the conversation is about shooting. Next year I’m going to become a better shooter. After that it’ll be probably, f—, my left foot is bigger than my right one. Who knows.

“So that’s why, back to your point, I don’t really care what people say, what they think about me, because it doesn’t really matter. I know what I’m able to do and know what I’m able to do at a high level every night, and nobody else can do what I can do on a night-in, night-out basis, and I truly believe that. If they could, I’m pretty sure they would. But I know for a fact that nobody can.”

Westbrook still impacts the game with his drives and athleticism, he is still an All-NBA level guard in this league, if not MVP level anymore. He is still one of the game’s elite players. However, as he was getting outplayed by Damian Lillard in the first round the questions came up again, “just how far can the Thunder go with Westbrook as their primary option?” After four surgeries in six years, can he still carry a team deep into the playoffs?

When Westbrook was on the floor without Paul George this season, the Thunder struggled. When it was George without Westbrook, they still played well. It’s become clear that not only must Westbrook improve his shooting — not to Curry levels, but closer to his MVP self that shot better from the midrange — but also Sam Presti and Thunder management need to find a way to get more shooting around Westbrook. A stretch-five, in particular, would help (Stephen Adams is good at a lot of things, but spacing the floor is not one of them). OKC needs shooters around Westbrook.

How the Thunder pull that off with a capped-out team — they have the second-highest payroll in the league this season and Westbrook and George are maxed out for years — is going to require some real creativity. But if the Thunder are going to be more than a first-round-exit team in the West, they need to find a way.