1) It’s not a one-man show, Damian Lillard and CJ McCollum outplaying Russell Westbrook and Paul George. Coming into the series, both Portland and Oklahoma City faced a question: Could their stars help overcome weakness with their depth and support players. Through four games, one team’s stars are outplaying their counterparts.

That played out again on Sunday: Russell Westbrook was 0-of-7 shooting in the second half, 5-of-21 for the game, finishing with 14 points. Paul George was 8-of-21 shooting but at least was getting to the free throw line on his way to 32 points. Meanwhile, Damian Lillard had 15 points in the third quarter alone when Portland started to pull away, CJ McCollum hit some critical threes in the fourth (he was 5-of-9 from three for the game) to help the Trail Blazers stay ahead on his way to 27 points.

CJ McCollum, how dare you… a one man wrecking crew pic.twitter.com/eKxe0ITEOk

After the game, Jusuf Nurkic (sidelined with a leg injury) couldn’t resist taking a little shot at Westbrook and his postgame antics.

A lot of the attention this series has gone to the heads-up matchup of Westbrook vs. Lillard duel — and with good reason, it’s been bad blood and entertaining. However, that has left McCollum in the shadows and he deserves some spotlight for averaging 26.3 points, shooting 51.6 percent from three, plus having 6.3 rebounds and 4.5 assists a game against the Thunder through four. Oklahoma City has not had an answer for him.

Oklahoma City has had to play a lot of Dennis Schroder this series because he’s been efficient on offense (17 points on 6-of-12 shooting Sunday) but either Lillard or McCollum can just take him in isolation whenever they want and get buckets. It also helps Portland when Al-Farouq Aminu is giving them 19 points, as he did Sunday.

The big picture lesson in this series: Shooting matters. Oklahoma City’s stars are not finishing well enough inside, settling for more midrangers than they should, and unless it’s from the right corner the Thunder struggle from three. You’re not going to win a lot of games with the shot chart the Thunder had on Sunday. 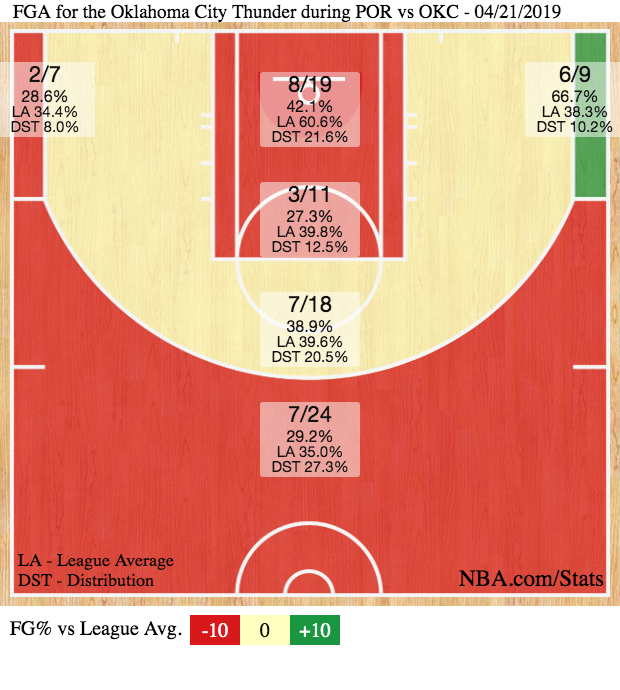 2) Boston sweeps past Indiana to advance, East races shaping up as expected. The playoffs in the East are going to be a dynamic show, but we knew that was really going to start in the second round. One could make a case for Milwaukee, Toronto, Philadelphia, or Boston to come out of the conference, but after those four there was a talent drop off. There was the first round to get through before the real fireworks began.

Boston advanced Sunday with a sweep of the Pacers, winning 110-106 behind 20 points from Gordon Hayward, who had himself a night.

Frankly, this series was decided back in January when Victor Oladipo went down with a ruptured right quadriceps tendon. Without him the Pacers — who played hard and smart in his absence, and were brilliantly coached by Nate McMillan — just did not have the firepower to score enough to make this series interesting.

Also in the East on Sunday, Toronto overwhelmed Orlando 107-85 to take a commanding 3-1 series lead as things head back north of the border for Game 5. That loss by the Magic all but sealed this series, which might have been a sweep if not for the rider in every Toronto player contract that they have to stink in the first game of every playoff series.

Milwaukee likely sweeps Detroit out of the playoffs on Monday night, setting up their showdown with Boston in the second round. Brooklyn has put up a fight against Philadelphia — down to their GM breaking NBA taboos and going into the referees’ locker room to discuss how they officiate Joel Embiid — but with the Sixers up 3-1 and having game 5 at home Tuesday, this series also feels inevitable.

Then we can get on to the main course in the East.

3) Klay Thompson goes for a swim, comes out of the ocean and destroys the Clippers, Warriors go up 3-1. Klay Thompson hadn’t played poorly through the first three games of the Warriors’ first-round playoff series with the Clippers, he’d played impressive defense and averaged 13.7 points on 44.4 percent shooting. But he hadn’t had a breakout game, the kind we expect from one of the game’s best shooters.

So he went for a swim (via NBC Sports Bay Area and Monte Poole).

“I told Jonas [Jerebko] yesterday when we went to the beach to play some volleyball, like, ‘Yo, I’m just going to jump in the ocean. I know that will reset my mind.’ And it worked.”

“The Pacific Ocean is undefeated,” said Stephen Curry after the game (he struggled with 12 points on 14 shots, the Clippers have defended him well this series).

Golden State has a showdown with Houston coming. With all due respect to the other teams still in the dance in the West, that is your Western Conference Finals, it’s just taking place in the second round. Houston has dominated Utah and can sweep them out of the playoffs Monday night.

Houston is playing its best basketball of the season, it is defending at a high level, and the Rockets have a shot against the Warriors. They believe they can win, but we’ll find out starting next weekend (most likely, dates for the second round are not public yet).