The NBA playoffs are underway and there can be a lot to unpack in a series of intense games, to help out we will give you the three things you need to know from the last 24 hours in the NBA.

THOUGHT OF THE DAY: Maybe there is something to having to win down the stretch of the regular season — to basically have your playoffs start early — when it comes to being ready for Game 1.

1) Joel Embiid is not himself and Sixers earn boos from fans in a loss to Nets. Sixers fans suffered through the losing of “The Process” for this? They know good basketball when they see it, but Sixers fans didn’t see it on Saturday in Game 1… well, not true, they saw it from a scrappy Nets team that picked up a 111-102 Game 1 win on the road.

Philadelphia fans didn’t see it from their hometown Sixers, who looked tight. So the fans booed.

Ben Simmons did not appreciate that, saying “If you’re a Sixers fan and you’re going to boo, stay on that side.”

Simmons earned those boos, however, with his nine-point, seven-rebound, three-assist night where the Nets dared him to shoot jump shots and he passed on those invitations. Simmons was not the playmaker Philadelphia needed him to be.

Joel Embiid was not the player the Sixers needed him to be. The Sixers best player was a game-time decision with knee pain but decided to play through it and wasn’t himself, except in flashes. Embiid put up numbers — 22 points on 5-of-15 shooting, 15 rebounds, and five blocks — but he wasn’t able to impact the game the way he was used to. He started the game shooting 1-of-9 and was not moving well at points.

In what seemed to symbolize the Sixers approach to the night, Amir Johnson and Embiid were caught checking texts on a phone during the loss. Johnson was fined by the team for that.

Brooklyn, a team of underdogs and cast-offs, played harder and with more passion than the star-studded Sixers. The Nets had a we-have-nothing-to-lose attitude that seemed to free them. D’Angelo Russell, in his playoff debut, was 3-of-15 shooting in the first half, but was 7-of-10 in the second half and finished with 26. Russell made sure there would be no comeback.

Philly did get 36 from Jimmy Butler.

One of the questions for Philadelphia this playoffs was how the team would handle adversity. We’re going to find out starting Monday night in Game 2.

2) The more things change, the more they stayed the same for Toronto in Game 1 loss. This was the year that was going to be different. They have Kawhi Leonard. They have a deeper roster. They have a coach who focused on preparing them for the playoffs along each step of the 82-game season. These Raptors were ready for the playoffs…

Kyle Lowry had zero points. Raptors fans have seen this movie from him before in the playoffs, but check out this shot chart 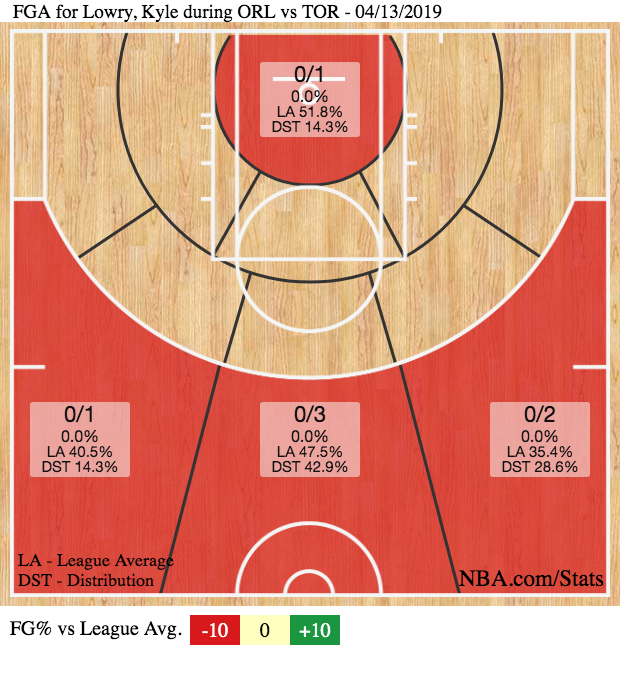 Kawhi Leonard was up and down, and the Raptors went as he did. When he was 4-of-4 shooting for 11 points in the first quarter, Toronto was up five and seemed to be in control. When he was 0-of-5 and didn’t score in the second quarter the Raptors were outscored by 13. And so it went, right down to the final shot of the game, Leonard’s “answer” to Augustin’s shot.

The Magic have been in playoff mode for a while, they had to close the season 22-9 just to make the playoffs. Orlando was ready. Toronto, not so much.

This series is far from over, but now it falls to the Raptors to prove that this season will be different from the last few.

3) Nikola Jokic has a triple-double in playoff debut but it’s not enough as San Antonio wins. The last guy to get a triple-double in his playoff debut? You might not remember him because he’s not in the playoffs this season, but it was LeBron James back in 2006. Nikola Jokic did it on Saturday with 10 points, 14 rebounds, and 14 assists. He also played solid defense all game.

But in crunch time the Nuggets lacked a scorer who could take over. Denver and Jokic tried to play the team game they had all season, giving up good shots looking for great shots, when what they needed was someone to just take and make a few shots.

Nobody was making shots, the Nuggets shooting woes from the end of the regular season followed them into the playoffs. Maybe Mike Malone needs to put Rocky in the game.

The Spurs were poised under pressure. Shocking, I know. They played like a franchise that has been to the playoffs for 22 straight years. Derrick White was the best Spur on the floor, with 16 points on offense and defense that smothered Jamal Murray on the other end. The Spurs needed that on a night DeMar DeRozan and LaMarcus Aldridge combined to shoot 33.3 percent.

The Spurs were the trendy first-round upset pick and in Game 1 they showed why — they knew how to execute under pressure.

Now the pressure is ramped up on the Nuggets for Game 2, we’ll see how they respond.