Every night between now and the end of the 2018-19 NBA regular season, we will take an updated look at the NBA Playoff picture — what the standings look like, the potential matchups, who clinched, who moved up and down, all to set the stage for the NBA’s second season.

• Boston and Indiana both win, keeping them tied in the 4/5 slots in the East.

• Nothing changed at the bottom of the East because Brooklyn, Detroit, Miami, Orlando, and Charlotte all lost. Some missed opportunities in there.

• For a team missing its second and third leading scorers, Portland is still putting up points and racking up wins, moving into a tie with Houston. 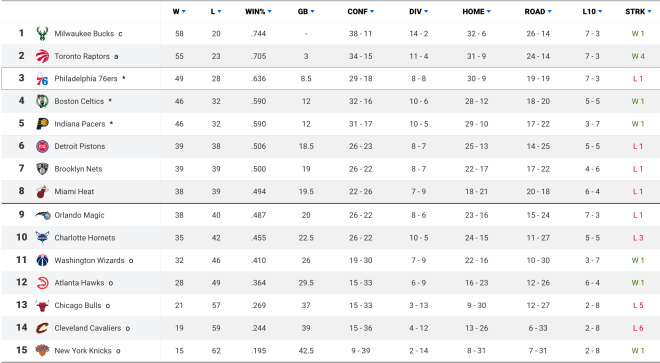 • With its win, Toronto clinched a finish no lower than as the two seed in the East.

• Miami’s loss to Boston opened the door for Orlando to climb back up into the eight seed, but the Magic watched Danny Green drop seven three pointers on them and lost to Toronto.

• Indiana and Boston both winning kept them in a virtual tie for the 4/5 seeds. The Pacers had lost 7-of-8 coming into this game so the win against another playoff team is a big boost to their confidence.

• While Philadelphia lost it remains basically locked in the three seed, 3.5 games up on Boston/Indy. 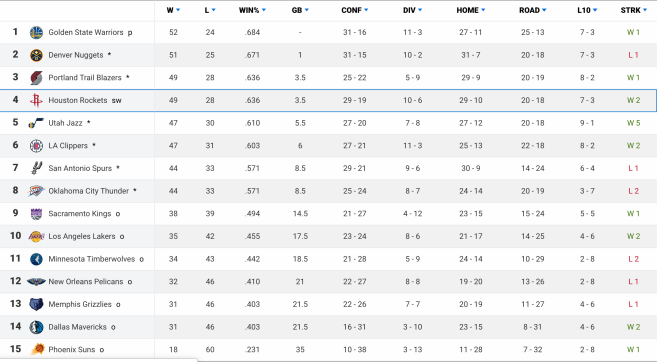 • With Portland’s win, it climbs into a virtual tie with Houston for the 3/4 seeds in the West (technically Portland leads on tie breakers for now).

IF THE PLAYOFFS STARTED TODAY:
Miami at Milwaukee
Brooklyn at Toronto
Detroit at Philadelphia
Indiana at Boston

• Denver at Golden State (10:30 ET, TNT). First place in the West is on the line. If the Warriors care enough to win they will have a two-game lead and have locked up the No. 1 seed, but if the Nuggets can get the upset on the road the teams will be tied — with the season series tied 2-2 — and we will have a race on our hands.