1) Warriors cranking up their defense as playoffs near, just ask the Pacers. Golden State’s defense this season has been like the team in general: There some nights and not others. Inconsistent. Blame injuries or lack of depth or just boredom, but on the season the Warriors have been a middle of the pack defensive team.

No longer. Starting to focus on good habits before the playoffs, the Warriors have cranked up the defense of late, with a defensive net rating of 100.7 in their last five games (just over a point per possession), and they are smothering teams. Such as the Pacers. A scrappy Indiana team scored less than 20 points in two quarters and the Warriors cruised to a 112-89 win Thursday night. The Warriors held the Pacers to 24 percent shooting in the first quarter, 32.7 percent in the first half.

Draymond Green remains the guy who makes the defense work, and DeMarcus Cousins now provides a big body in the paint to deter shots, but the Warriors defense really works best when players such as Kevin Durant and Stephen Curry are engaged. Of late, they have been.

Offensively against the Pacers, DeMarcus Cousins led the way with 19 points and 11 boards.

One of the best moments of the night was the warm welcome Andrew Bogut got in his return to Golden State.

Thursday’s win keeps the Warriors half a game ahead of the Nuggets (who also won Wednesday) for the top seed in the West.

2) The bottom half of the West is a seeding battle royal — Jazz, Thunder, Clippers, Spurs all tied in seeds 5-8. Utah had a chance to create a little space in the standings Thursday night, but their legs just got stuck in the mud in Atlanta. After a stellar third quarter, the Jazz looked like a team on the second night of a back-to-back playing their third game in four nights in the fourth, and the Hawks pulled away behind Trae Young (who did more damage with his 11 assists than his shot on the night) to get the win. 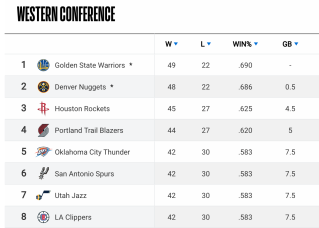 This is going to make the final 10 games fun to watch.

Seeding matters. Nobody wants to be the eight seed and get Golden State in the first round (this assumes the Warriors don’t get bored and let Denver get the top seed, but the Nuggets have a much tougher schedule the rest of the way). When I asked Portland coach Terry Stotts about trying to think about playoff matchups in the first round of the West, he said there would be no easy ones in the deep conference so sharp play and momentum are what mattered, and he spoke for pretty much every coach on that front.

How is this going to shake out? The Thunder have by far the toughest schedule, one of the most difficult in the league the rest of the way. The Jazz have the easiest schedule of any team in the West in their remaining games, the Spurs have the second easiest. But nothing about this season has been predictable, this will not be either.

3) Did Ja Morant play his way into being the No. 2 pick in the draft? The NBA world, like the sports world in general, was talking about the triple-double by Murray State’s Ja Morant in the first round of the NCAA Tournament. He was impressive.

Did Morant play his way into being the No. 2 pick? (Zion Williamson is a lock at No. 1.) Actually, Morant may have done that before Thursday — he had a strong regular season — and Thursday was more of a reinforcement.

Whether Morant or R.J. Barrett or some surprise player goes second in the draft will come down to the draft lottery and who gets that No. 2 pick. Is it Phoenix or New York, teams in desperate need of a point guard? If the Hawks or Cavaliers land the No. 2 pick, are they looking more at Barrett? It’s too early to say, and it depends on those teams’ internal draft boards and how they rate players.

But Morant is in the mix, and may now be the frontrunner.