The Lakers lost to the Denver Nuggets on Wednesday night, their fourth dropped game in a row. LA is in a tailspin and is unlikely to make the playoffs, and now LeBron James is apparently going to be on a minutes restriction the rest of the year.

From a news perspective, the act of Rondo sitting not on the Lakers bench is relevant. If this is something that he does with frequency, it’s not something that’s been reported at length before. Plus, in the context of where the Lakers are in the standings — and with Rondo being one of the veterans on the team meant to lead — his physical distance told a visual story about what’s happening with Los Angeles right now.

Of course, we’ve seen NBA players get upset about how they are covered in the media and what they deem to be important. Kyrie Irving has had a rough go of it lately, and Rondo was no different. After stories about Rondo published, the veteran point guard took to his Instagram to say that people were trying to gaslight him. 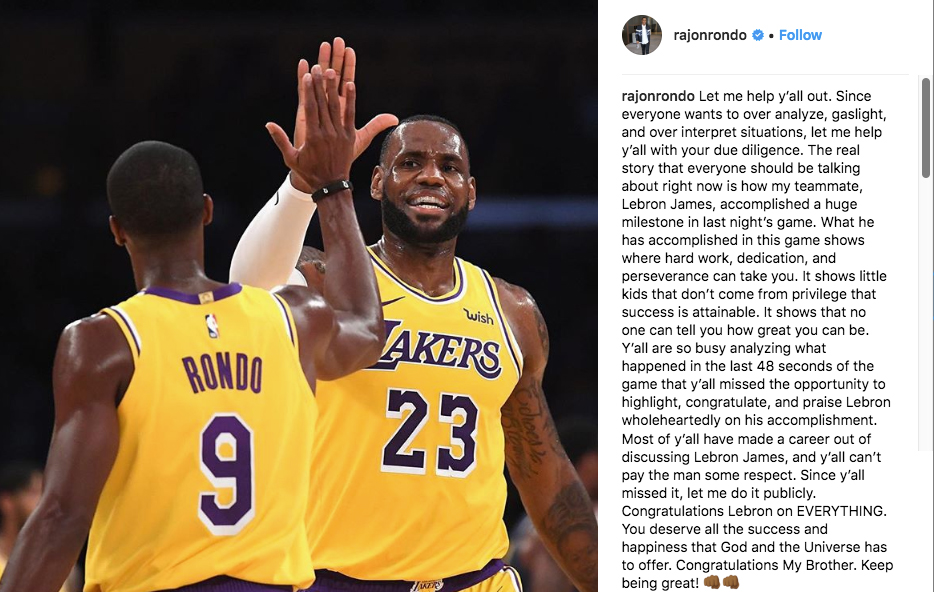 There are two things to unpack here. First, nobody said that you can’t have two stories on the same night. It’s completely fair to say that the two stories on Wednesday were:

Second, it’s not as though the media didn’t talk about James passing Jordan. That was a major story, one that trended on Twitter and made its way across every major NBA outlet. Rondo acting as though people did not pay their due respect to LeBron does not mean that’s what happened.

But this is an era where any bozo can just throw their hands up and say “fake news!” this kind of thing gains traction. It doesn’t mean that, in the eyes of the universe, anything is more true or less true, but it can sway public opinion nonetheless.

Rondo isn’t a trained journalist, so his determination of what’s newsworthy, what should be covered as top priority, and what’s a non-story isn’t an expert opinion. He has the right to be upset that his seating arrangements got picked up, and that he’s facing heat for it. But to act as though news outlets aren’t doing their due diligence is an argument made in bad faith. That’s disappointing to hear from a brilliant mind like Rondo.

It must be frustrating to not be able to craft a narrative around yourself when every NBA player is now a brand. But the spotlight is bright for a reason, and the reality is that Rondo sitting away from his bench is weird no matter the explanation — even on a historic night for LeBron.