1) Any questions? Warriors take over first place in West after scoring 51 points in the first quarter, routing Denver. Injuries. A lack of depth. Infighting. Disinterest that has led to them dropping big games on national television. These Golden State Warriors are not the same, they are in real tr…..

Oh, forget it. They are who we thought they were.

Despite all of the drama and fixation — bordering on obsession in some quarters — on what is wrong in Golden State this season, the team is 30-14 and has taken over first place in the West with an emphatic thrashing of the Denver Nuggets Tuesday night, 142-111.

That win included an NBA-record 51 point first quarter with the Warriors shooting 10-of-14 from three (and putting up an offensive rating of 212.5 (points per 100 possessions).

The Warriors didn’t slow down much the rest of the game, check out this shot chart. 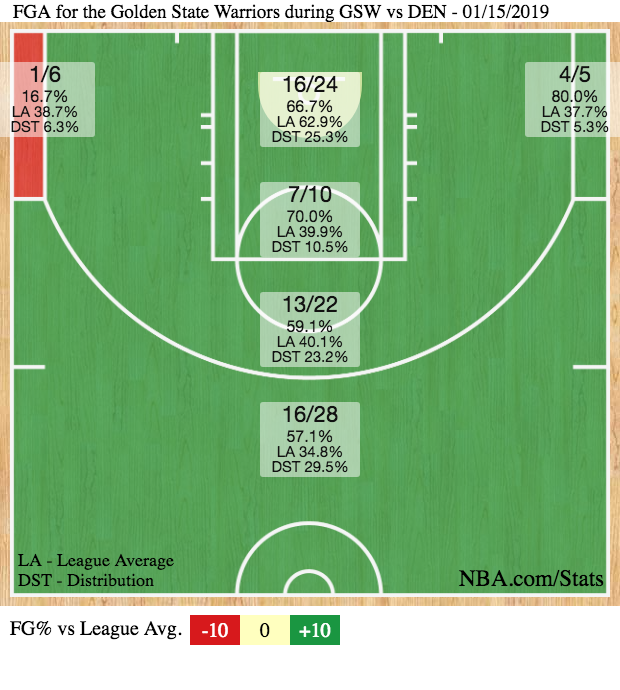 When the Warriors hit some early threes, get a few easy buckets, and get to play downhill and have fun, it becomes an unstoppable avalanche. That’s what rolled over Denver Tuesday. When you look back at the Warriors’ high profile losses — to the Raptors on national television, to the Lakers on Christmas Day — the games were more of a grind, a slog, they felt more like work and the Warriors just get bored with that in the regular season. They don’t care, and it shows.

But when they care, they remind everyone who has the Larry O’Brien Trophy and how hard it will be to take it from them.

The Nuggets contributed to their own demise, this was not a team that looked ready to defend with energy from the first tip. In transition, the Nuggets were slow to match up. When Curry would make a cut to the corner, defenders were a couple of steps slow going with him and we all know what happens when Curry has space. Denver’s defensive switching was sloppy. While the Nuggets on the season have a top-10 NBA defense, that has slid to the second worst in the NBA in the last 10 games. Denver is in a defensive rut and that will come back to bite them against more than the Warriors if they don’t turn it around.

2) How did that Jimmy Butler trade work out? Sixers rout Timberwolves in the first meeting of teams since the trade. The Minnesota Timberwolves have been better without Jimmy Butler — they have gone 17-13 with a +3.7 net rating since former coach/GM Tom Thibodeau finally realized Butler’s antics were destroying his team and shipped the All-Star off to Philly. Karl-Anthony Towns has led the resurgence, returning to his All-NBA level of play.

You would know none of that if you watched the what Butler’s Sixers did to the Timberwolves Tuesday night.

On a night the Timberwolves should have shown up with some fight, they rolled over. It made what Butler said as he torpedoed the Minnesota season look prophetic.

While Butler’s return was the storyline coming it, it wasn’t what keyed the win. Joel Embiid owned KAT, scoring 31 points and grabbing 13 rebounds while holding Towns to 14 points, leading Philly to a 149-107 destruction of Minnesota. Embiid was trash talking after the game on social media.

It was an honor to be part of the 3rd stringers and get a win against real NBA starters #TheProcess pic.twitter.com/uPw7F0WjLo

So was Butler, who had 19 points on the night and said after the game “It was everything that I thought it would be.” Butler helped spark an 83-point first half from the Sixers, this game was over early. For all the questions about the fit of Butler, Embiid, and Ben Simmons, things looked a lot better in Philly than they did when Butler was calling out Towns and Andrew Wiggins.

Minnesota played terribly, particularly on defense where they looked like they had never seen a dribble hand-off before. You can say it was a flat outing, something that happens over the course of 82, but they looked more like a team that was intimidated. They made Butler look right.

Ryan Saunders needs to figure out how to get his guys back on track and back in the playoff chase in the West, where the Timberwolves remain 2.5 games out of returning to the playoffs with a lot of work to do.

3) Atlanta continues it’s improved play, routs Oklahoma City 142-126. While nobody was looking, the Atlanta Hawks have been playing pretty good basketball — they are now 8-7 in their last 15 games, with an average NBA offense and a just slightly below average defense in that stretch (not great for most teams, but a vast improvement for the Hawks).

They capped off that run of good play Tuesday with a 142-126 win over Oklahoma City. Rookie point guard Trae Young had 24 points and 11 assists, and he has started to show some chemistry with Kevin Huerter, who finished with 17 points of his own.

The Thunder have the best defense in the NBA on the season, allowing 103.6 points per 100 possessions, but in the last five games that has slipped to 119.7 per 100 (28th in the league in that stretch). Teams have bad stretches over the course of 82, but the Thunder are built on defense and they can’t afford for this run to last much longer.