Traditionally, Sports Illustrated’s Sportsperson of the Year award is given to a… person. Last year it was the NFL’s J.J. Watt and the MLB’s José Altuve splitting the award. Before that it was LeBron James, or Serena Williams, or Madison Bumgarner, or Peyton Manning. All individuals.

This year, Sports Illustrated stepped out of the box and gave the award to a team — the Golden State Warriors.

Tonight you can watch the Warriors receive their award, at 9 p.m. ET on NBCSN or on the NBC Sports app.

In addition to the Sportsperson (or, team) of the Year there will be other awards presented, such as the Muhammad Ali Legacy Award, SportsKid of the Year, and three separate awards given to athletes who inspired, amazed and surprised the entire sports universe in 2018. 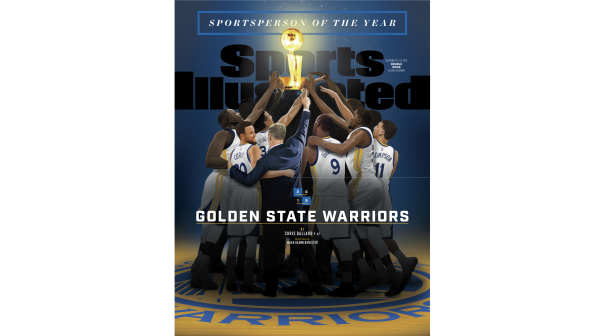 Why the Warriors? I’ll let the eloquent Chris Ballard of SI explain.

There are myriad reasons Sports Illustrated is honoring the Warriors with its 2018 Sportsperson of the Year Award. For sustained excellence, business innovation and cultural impact. For injecting joy into the game and setting fire to conventional wisdom. For winning with a center built like a forward, a point guard built like a featherweight and an offense predicated on the idea that stars want nothing more than to pass the ball to someone who will pass the ball to someone else who might shoot from 27 feet. For thinking the game and speaking out. For being fun to love and fun to hate. For rewarding the stubborn faith of the Oakland fans, not only with titles but also a basketball purist’s approach. And, of course, for always keeping things interesting.

The Warriors are all that. And it’s fitting to honor them as a team, not individuals, because that’s what makes them unique. Stephen Curry sets the tone and culture (plus hits ridiculous threes) but Kevin Durant is their best player, Klay Thompson is magical, and Draymond Green is both the emotional leader and the defensive glue that makes it all work. They are all great players, but they are the perfect example of the whole being greater than the sum of its parts.

They deserve the award. As a franchise.

Tune in tonight and watch them receive the honor.