1) We knew the West would be bunched up but… damn. This is just insane. We are a quarter of the way into the NBA season and 14 teams in the Western Conference — every team save Phoenix — can legitimately think they have a shot at the postseason.

And that will have implications.

Here are the standings as of now: 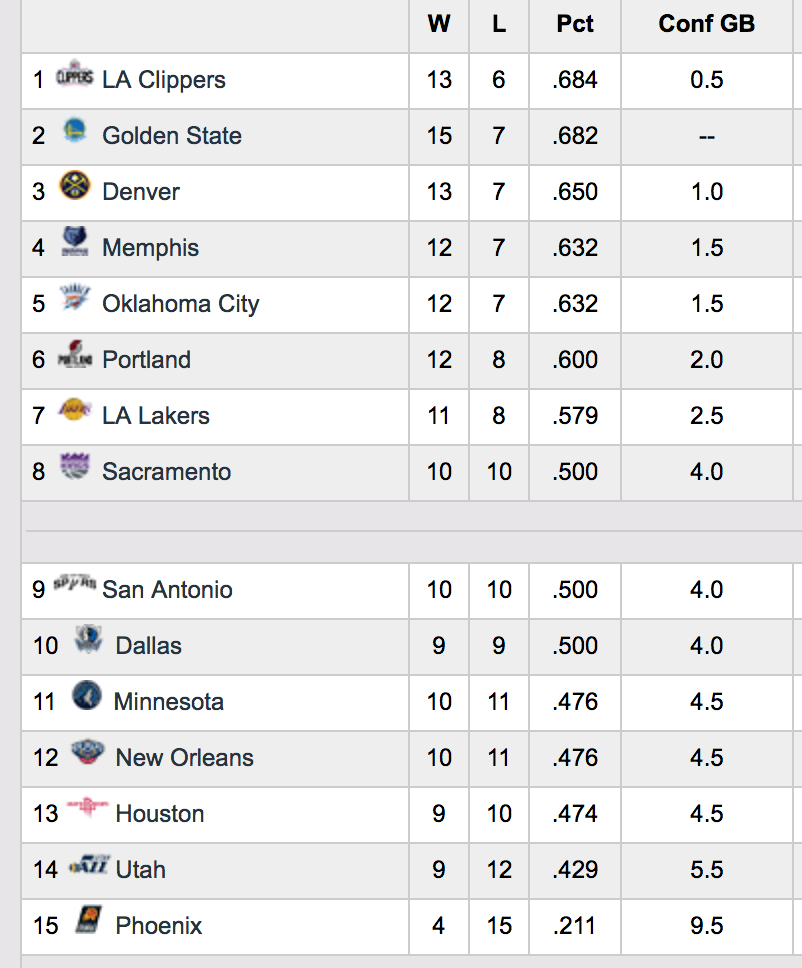 The 14 seed Utah Jazz are just 1.5 games out of the playoffs (and I think the Jazz will shake out of their slow start and still make the postseason). The top-seeded Clippers (did not see that coming) are just 4 games from being out of playoffs entirely, ahead of 9 seed Spurs and Mavericks (the 8-10 seeds all tied).

Just for comparison, in the East top-seeded Toronto is 5 games up on Detroit, the No. 5 seed, and the Raptors have an 8.5 games cushion on making the playoffs over the No. 9 seed Wizards. (The “lowly” Suns out West are 9.5 games back of the Clippers, and they are dead last in the conference by a long shot.)

Two big things will come out of this tight West.

First, it means a depressed trade market at the deadline because there are fewer sellers. We thought Sacramento, Dallas, maybe San Antonio, and other teams might be looking to move veterans and take on salary for young players or picks to jump-start a rebuild once they were out of it, but all of those teams are now thinking playoffs and not going to throw in the towel. If anything, more teams in the West may be buyers, which also could lead to a bubble in the market.

The other thing to watch is seeding for the playoffs, and how much it matters. Certainly there are advantages to being at home (even in the first round) but in a West where every team in the postseason (outside of a healthy Golden State) could potentially beat any other team, being healthy and getting the right matchups will matter more than where the games are played. It might be better for some team to be the six seed and get a better matchup for them than to be the four seed, have home court but a tougher matchup.

2) James Harden goes for 54 but the Rockets still lose… to the Wizards? MVP James Harden showed up on Monday night in our nation’s capital and put on a show — 54 points on 32 shots, knocking down 7 threes, and scoring seemingly at will against the Wizards. With 13 points and 11 turnovers, technically Harden had a triple-double.

But it wasn’t just Harden. With Chris Paul out, Eric Gordon got the start and he scored 34 points (on 23 shots) for a backcourt total of 90 points — second most by a backcourt tandem in a game ever. You’ll never guess one of the two ahead of them on that list, by the way:

James Harden (54) and Eric Gordon (36) combined for 90 points, the 2nd-most by a starting backcourt since starts were first recorded (via @EliasSports).

And yet it wasn’t enough. John Wall had 35 points and 11 assists (Wall passed Wes Unseld on the Washington all-time scoring list during the second quarter), Markieff Morris had 22 points off the bench, and those Harden turnovers — a couple late in the game, a couple more in overtime, he struggled late when forced to go right — were enough to get Washington the win in OT, 135-131.

Let’s not go so far as to say the Wizards have fixed their woes, but they are now 3-1 since coach Scott Brooks moved Thomas Bryant and Kelly Oubre Jr. into the starting lineup, then sent Markieff Morris to the bench.

3) What controversy slowing him down again? Kevin Durant in a groove, drops 49 on Orlando. Kevin Durant is the best pure scorer in the game and he has found his groove again. In his last three games — all Warriors wins — he has 125 points, shooting 52.5 percent.

Orlando was the latest victim, Durant dropped 49 on them to spark a comeback win for the Warriors, 116-110 over Orlando.

Klay Thompson had 19 of his 29 in the fourth quarter to help with that comeback. And the Warriors might get Stephen Curry back Thursday in Toronto. You can stop worrying about this team, if you were for some odd reason