The NBA has released the big news days of the schedule — opening night, Christmas Day, and Martin Luther King Jr. day. Fans are going to get what they want: a heavy dose of Stephen Curry and Golden State, LeBron James and the Lakers, plus the revived rivalry of the Celtics and 76ers.

Here are the significant dates to note released Wednesday (the rest of the schedule comes out Friday):

Opening night, Oct. 16: Philadelphia 76ers vs. Boston Celtics, Oklahoma City Thunder vs. Golden State Warriors. The battle for supremacy in the East starts opening night, while Russell Westbrook and Paul George get to watch the Warriors raise another championship banner, then try to wipe that smug smile off their faces.

Oct. 17: New Orleans Pelicans vs. Houston Rockets, Dallas Mavericks at Phoenix Suns. Houston has to open its run against Anthony Davis and company, then we get our first regular-season look at No. 1 pick Deandre Ayton.

Oct. 18: Los Angeles Lakers at Portland Trail Blazers. LeBron makes his Lakers debut on the road against Damian Lillard, C.J. McCollum and the Trail Blazers. It may be Game 1 for both teams, but in a brutal West all these matchups of teams fighting for playoff slots will matter. LeBron’s home debut is two days later, Saturday Oct. 20, vs. Houston.

Christmas Day, Dec. 25: Milwaukee Bucks at New York Knicks, Oklahoma City Thunder at Houston Rockets, Philadelphia 76ers at Boston Celtics, Los Angeles Lakers at Golden State Warriors, Portland Trail Blazers at Utah Jazz. Five games again on Christmas for the day the NBA owns (well, besides your family and all that stuff). LeBron vs. Curry and Kevin Durant headline the day as expected, as well as another Boston/Philly clash. The fun ones will be that Thunder and Rockets game, and it’s great to see Donovan Mitchell and the Utah Jazz land a prime-time slot. They have earned it.

Here is the full schedule released so far, the rest will be released Friday. 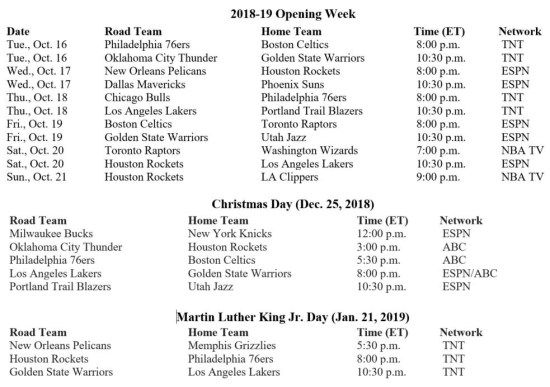