CLEVELAND — When LeBron James was taken out of Game 4 with four minutes left, he went around and dapped every player on the floor, Warrior and Cavalier.

Notice he did it all with his left hand.

That’s because LeBron had an injured right hand that he had been playing through since Game 2, the result of a frustrated punch of a board in the Cavaliers’ locker room after that Game 1 loss. This was first reported by Brian Windhorst and Dave McMenamin of ESPN, then confirmed by LeBron.

LeBron came into his post-game press conference with his right hand wrapped in a soft cast.

“What happened? Self-inflicted, postgame after Game 1,” LeBron said from the podium. “Very emotional. For a lot of different reasons, understanding how important a Game 1 is on the road for our ballclub, what would that have done for us, the way we played, the calls that were made throughout the course of that game…

“Pretty much played the last three games with a broken hand, so that’s what it is.”

LeBron James suffered a significant right hand injury after Game 1 when he punched a black board in the locker room, sources told me & @mcten. He had 2 MRIs & has been wearing a soft cast. LeBron not using injury as an excuse but kept quiet to prevent Warriors from knowing.

The cast clearly impacted LeBron’s game — he didn’t trust his jump shot the same way he did in Game 1, so he attacked the rim relentlessly and tried to get inside. Look at his shot chart from games two, three, and four combined. 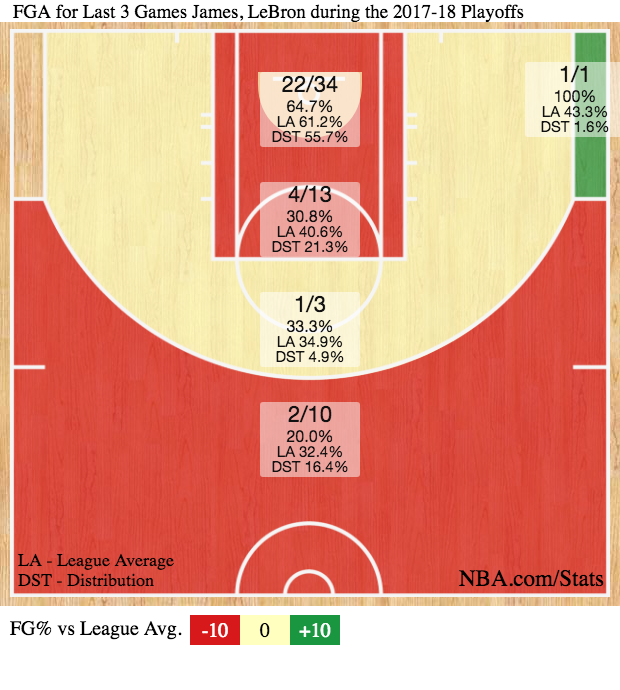 LeBron still averaged 28.3 points per game on 49.2 percent shooting, with 10.7 assists and 7.3 rebounds a game in those three games with a sore hand.