OAKLAND — The reports of the death of the midrange shot are greatly exaggerated.

It’s not the Golden State’s preferred shot — the Warriors pulled away in the fourth quarter of Game 2 because Stephen Curry started doing ridiculous Stephen Curry things and finished with a Finals record nine-made threes (he wants your Finals MVP vote).

It was Curry’s brand of brilliance that built the blowout late, but it was the midrange shot that laid the foundation for that push. It’s the beauty of the Warriors — they can beat you a lot of ways. Give them good midrange looks and they will knock them down.

They did in Game 2 — the Warriors shot 71.1 percent from two in the game (and that was with Curry going 2-of-9 from two, apparently those shots are too close for him). Look at this shot chart. 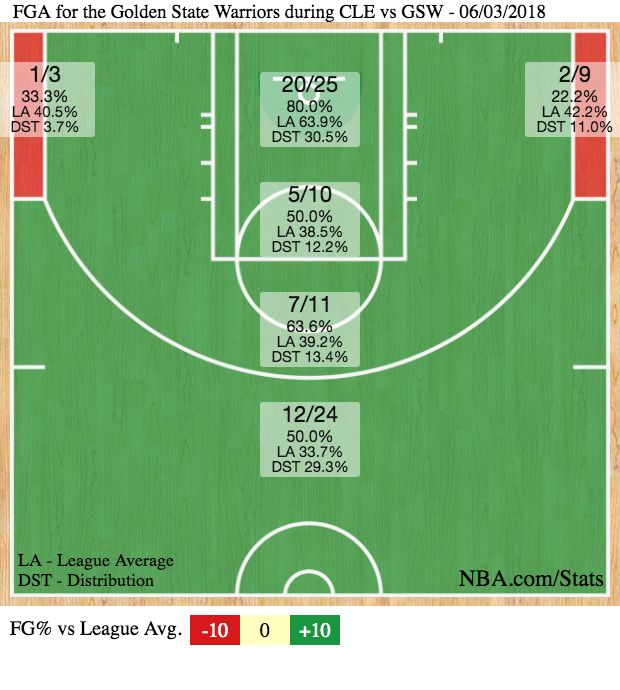 The result was a 122-103 Golden State win that has the defending champs up 2-0 in the series. The Finals move on to Cleveland for Game 3 Wednesday.

This was an improved Warriors team from Game 1, and when Golden State brings its “A” game they will overwhelm any team, including Cleveland.

“We played really well tonight,” Warriors coach Steve Kerr said after the win. “There were a few things that bothered us in the second half, a few defensive breakdowns we’ll take a look at on film. But overall it was a really good, balanced game. Good defense. Good intense defense and excellent offense.”

Curry finished with 33 points and had the nine threes. Kevin Durant had 26 points on 10-of-14 shooting. As a team, the Warriors shot 57.3 percent for the game. Klay Thompson, who was questionable for the game with a high ankle sprain, played 34 minutes and scored 20 points — he was just fine.

LeBron James was nothing short of brilliant again — 29 points, 13 rebounds, and nine assists. He is single-handily keeping games close. Kevin Love had 22 points but was once again a defensive liability. As a team, the Cavaliers shot 41.1 percent.

Golden State’s offense was far more crisp in Game 2 than in Game 1, and they attacked. The Cavaliers tried to chase them off the arc early, and the Warriors took that as an invitation to the paint.

The corollary to the Golden State offense is that Cleveland’s long-spotty defense has no answer for the Warriors starters, even if one of them is JaVale McGee.

The Warriors came out of the locker room on fire. McGee got the start (Kevon Looney came off the bench) and then got the first four points of the game, one slipping a screen for Curry, the other cutting to the rim when his man went to help on a Durant drive. The Warriors started the game shooting 7-of-7, and shot 65.2 percent in the first quarter. They raced out to a 15-6 lead.

“We watched the film, and obviously from Game 1 LeBron had an amazing night. But a lot of it was just a lack of kind of sense of urgency early in possessions to try to just be physical,” Curry said after the game. “Klay (Thompson), Draymond (Green) and K.D., especially, were huge in that transformation to Game 2 with just putting up a little bit of resistance, and just trying to make them work.”

The Cavaliers, as they have done throughout the start of this series, would not go away. The Cavaliers attacked the rim more on offense, defended better (once the Warriors got into their shallow bench) and kept it close. It was just a four-point game, 32-28, after one.

Then the Cavaliers started second quarter shooting 1-of-7 and it was a symptom of them not scoring inside — the Cavs were 12-of-27 (44.4 percent) in the paint in the first half. Kevin Love couldn’t buy a three, and the Warriors started to create a little space.

Curry was trying to throw haymakers from three and hit a couple, behind that the Warriors put up 59 points and were up 13 at the half.

Then the seemingly impossible happened — the Cavaliers won the third quarter. By three points, but still. There was no dominant Warriors’ run. Cleveland came out firing from three (4-of-6 in the first six minutes of the third) and Love found his range. The result was the game got pushed back down to a six-point lead.

Still, by the end of the quarter it was 90-80 Warriors. The Cavs just could not close the gap all the way.

Then Curry drained a three on a sweet stepback. Then another.

Curry set the record, and the Warriors are halfway to another title.