That looked like the Pelicans who swept the Trail Blazers out of the playoffs.

From the opening tip back in the comfort of their home, New Orleans was knocking down threes, being far more physical and aggressive on defense, and consistently exploiting a Warriors team that was sloppy with their defensive switches and communication.

The result was a wrap-the-ice-on-your-knees-with-five-minutes-left kind of blowout win.

Anthony Davis was a second-half beast and finished with 33 points and 18 rebounds, Jrue Holiday had 21 points, and Rajon Rondo added a ridiculous 21 assists. With that, the Pelicans blew Golden State away in the second half, winning 119-100.

Golden State still leads the series 2-1, but New Orleans has a chance to even it up Sunday in the Big Easy.

“We’re home, we believe we’re a great home team no matter who we’re playing, our fans were unbelievable tonight, and guys made shots. That was the difference maker,” Davis said. “

If Golden State plays the same way, New Orleans will even the series.

This looked more like the regular-season Warriors that tried to get by on talent and were not dialed in. It’s not just that their shooters were off, although they were. Stephen Curry was 6-of-19 and struggled to create space for himself all game, plus he was attacked on defense, that knee is not as healthy as everyone thought. The Pelicans cranked up their defensive pressure and the result was this shot chart by the Warriors, where they barely got to the rim — they had six more midrangers than shots within three feet — and missed their jumpers. 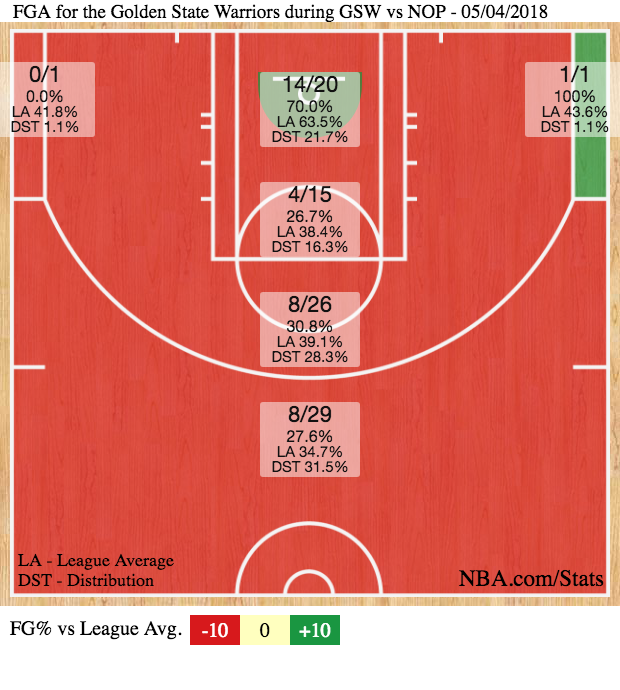 Even more than the offensive and lineup questions, it was the defensive end where the Warriors’ issues were most obvious. The Warriors defensive attention to detail — staying with Mirotic when he pops out after setting a pick, or being prepared for duck-ins from Davis — that has mostly shown up in the playoffs was lacking on Friday night.

New Orleans is simply too good a team to do that against.

The Pelicans opened the game red-hot — after shooting 33.9 percent from three in the first two games, they opened this one up 6-of-9 from deep and raced out to a 13 point lead. Holiday was fueling that run with a couple of threes (meanwhile the Warriors opened 1-of-7 from beyond the arc). The Pelicans did a good job of giving whoever Curry was guarding the ball then using Davis to set picks, so there could be no switch. It led to some good looks for New Orleans and they were 10-of-16 from three in the first half. However, the Pelicans were getting good buckets inside as well, attacking off the sleepy Warriors switches.

All of which is why it felt like the Pelicans should have been up by more than six at the half. Part of the reason was Klay Thompson, who had been getting good looks for a couple of games but not shooting like he’s expected to, finding his groove and scoring 20 in the second quarter.

In the second half, Davis took over and the Pelicans raced out to a 21-7 run at the start and never looked back.

It wasn’t just Davis in the second half, it was the Ian Clark revenge game — the former Warriors dropped 18 off the bench on his one-time teammates.

The tenor of Game 3 was radically different from the first two games of the series. The Pelicans believe they can continue that, but we have all seen the Warriors flip the switch and win big games on the road. They will play better.

Which is going to make Sunday very interesting.