The NBA is back, and every day around the league there is a lot to unpack, so every weekday morning throughout the season we will give you the three things you need to know from the last 24 hours in the NBA.

1) Russell Westbrook rescues Thunder with game-winner vs. Kings. It wasn’t just averaging a triple-double for a season, when it came time to vote for MVP last season one of the reasons Russell Westbrook came out on top was how clutch he had been. He hadn’t just willed his team into games they probably should have lost, he got them the wins — in the final three minutes of games within three points last season (something that happened 32 times for the Thunder), Westbrook averaged 4.4 points scored (best in the NBA of anyone who played in more than five such games) and shot 38.7 percent from three.

That Westbrook was back on Thursday. With the game tied 107-107 and one second left, the Thunder ran an out-of-bounds play where Westbrook got surprisingly open coming off a double screen and had room for a clean look catch-and-shoot three. Do we need to tell you what happened?

OKC needs the wins for playoff seeding through its final 22 games — the Thunder are now just 1.5 games out of being the three seed in the West, or 2.5 games away from falling out of the playoffs entirely. The West is that bunched up. They should make the playoffs (fivethirtyeight.com gives them an 89 percent chance of being in) but where they fall will determine how tough a run through the playoffs they will face. 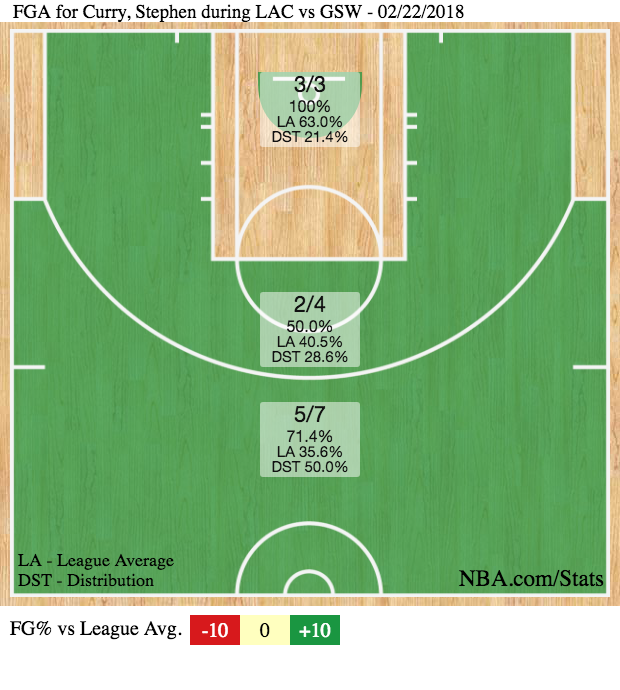 Curry had 44 points on 19 shots and just could not seem to miss, even nailing a buzzer-beater from the center-court logo.

Credit the Clippers here, who put up points (22 from Tobias Harris) and made this a contest, falling 134-127. Los Angeles is fighting for a spot in the playoffs (they are currently one game back of New Orleans for the eight spot) and have found ways all season despite a rash of injuries and Blake Griffin being traded. They should be appreciated for their play this season. There’s just not much you can do when Curry and the Warriors are going off.

3) New look Cavaliers suffer first loss, fall to Wizards. The newfound energy was there in Cleveland. LeBron James was playing at an MVP level. The versatility of the new-look Cavaliers roster was on full display.

Cleveland just couldn’t shoot Thursday night. To be more specific, Cavaliers not named LeBron James (32 points on 18 shots) couldn’t buy a bucket. Cleveland was 8-of-35 from three and in the final nine minutes of the game the non-LeBrons were 0-of-10 shooting. The Wizards went small and were +17 with that lineup as the Cavs had no answers (the lineup was Bradley Beal, Tomas Satoransky, Otto Porter, Kelly Oubre, Markieff Morris). The Wizards got the win 110-103.

Cleveland can chalk this up to an off night, and it was. It was also a reminder of why this Cleveland team isn’t as good as a year ago — they don’t have a reliable second shot creator and scorer who can just get buckets and lift the team up. Kyrie Irving is an elite scorer, but he’s in Boston. George Hill, Jordan Clarkson and the new guys are not on that level. Some nights that will be an issue.

The Wizards are now 8-2 since John Wall went down and are scoring 4.2 points per 100 possessions above their season average in that stretch. The ball is moving and the players are moving off it, Beal has been brilliant, Satoransky has stepped up, and the Wizards are securing their spot in the top half of the East. When Wall returns he has to figure out how to fit in with this offensive style, not come in and dominate it with the ball in his hands.

The Wizards need more wins like this as they enter a tough stretch of their schedule (14 of the next 16 are against teams currently in the playoffs).