On the second night of a back-to-back, C.J. McCollum had one of the most impressive offensive nights in Trail Blazer history. It started from the opening tip — he scored 28 points in the first quarter alone on 11-of-14 shooting.

He didn’t slow down from there, he was hitting everything and finished the night making 18-of-25 from the field and averaging 1.71 points per shot attempt. He was hitting from everywhere, check out this shot chart. 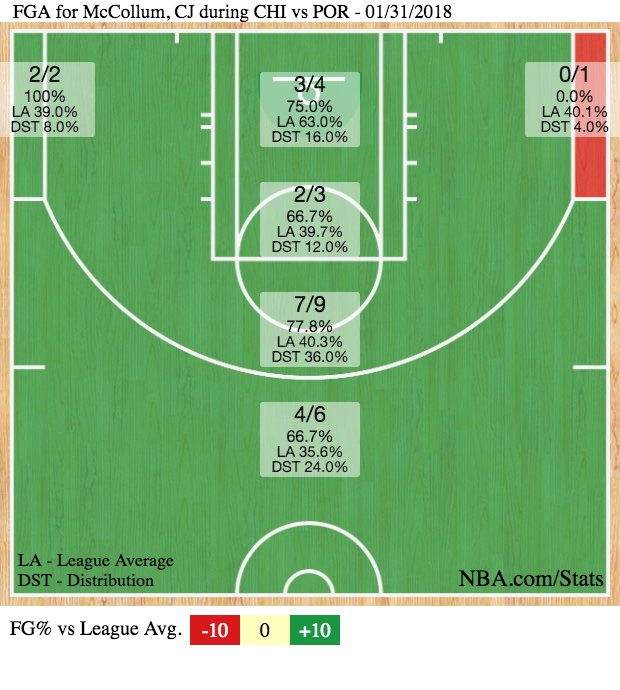 2) Cavaliers pick up a win over Heat to hold on to the third spot in East.

It’s been a long January for the Miami Heat, they were 5-8 in the month, had just lost Kevin Love to a hand injury that requires surgery, trade rumors were (and are) swirling around the team, and they were only half-a-game ahead of the Heat for the three seed in the East.

Then on the final night of the month, Cleveland held on for a win over the Heat that helps them hold on to that three seed, 91-89. For now.

This was a close game at the end, the kind of game the Heat have been winning all season — they have 22 wins in games within five points in the final five minutes in the NBA, most in the league — but when you live in close games the scales tend to balance out over time. In this one the Heat remained ice cold from three all night, hitting just 3-of-28 from beyond the arc, and that included a clean Tyler Johnson look to tie late. Miami also had the chance to tie the game in the final seconds: Down 2 with 7 seconds left after a missed Kyle Korver free throw, James Johnson drove the length of the court and went right at LeBron James, expecting to draw other defenders and kick out, but when LeBron did a great job staying in front of him and the other Cavaliers defenders covered Heat shooters, Johnson got near the rim, picked up his dribble, and had nothing. He didn’t even get a shot off before the buzzer. It was ugly.

Which fit, because it was a sloppy game from both teams, but right now the Cavaliers will take a sloppy win. They will take any win. The schedule doesn’t ease up on them in February, the Houston Rockets are up next, but Cleveland could use to string together a few wins, get back on a roll, and look like the team we all came into the season expecting to be the team to beat in the East. Cleveland may still have that team in them, but it hasn’t looked like it for a while now. Especially on defense. Some wins could change that perception.

3) RIP Rasual Butler. One of the best-liked players in the NBA during his 13-year career, passed away late Tuesday night/Wednesday morning in a single-car accident in the Studio City area of Los Angeles.

Butler reportedly lost control of his SUV at 2 a.m. Wednesday morning, the car flipped and hit a wall, and he and his wife — R&B singer Leah LaBelle, who many may remember from American Idol in 2004 — died in the accident.

The NBA world was shaken.

I can stop crying right now. RIP Rasual and Leah. I was just with you both a few days ago. Such beautiful people. Life is so precious. 😢

I’m shocked, saddened and in disbelief about the news on my friend Rasual Butler and his wife Leah. May God be with their families. We will miss you ‘Sul..🙏🏾

Butler was the definition of hard-working and professional. He was a playground legend in Philly as a youth, then went on to play four years at LaSalle University. He was drafted in the second round by the Miami Heat back in 2004, and while most guys drafted where he was don’t pan out Butler — thanks to his work ethic and ability to mold into different systems — went on to play 13 NBA seasons (for the Heat, Hornets, Clippers, Bulls, Raptors, Wizards, Pacers, and most recently in 2015-16 for the Spurs). He was a swingman who could defend, hit threes, play within the system and be solid every night. Last season he played in Ice Cube’s Big3 league.

More importantly, he was one of the best-liked guys in the league. He was real. Butler was trusted by coaches, beloved in the locker room, and, at least in my interactions with him, was both professional and smart, the kind of guy you’d want to sit down and have a beer with.

Our thoughts go out to his family and friends.

LeBron is averaging 30.2 points per game this season, at that pace he would set the record on Feb. 4 at the New Orleans Pelicans.

Since he turned 38 (on Dec. 30), LeBron has averaged 35.2 points per game, which would see the mark broken in New Orleans. However, it wouldn’t be a surprise to see the record fall when LeBron returns to Los Angeles on Feb. 7 or Feb. 9.