He wants to be unleashed on the NBA, and he feels he’s being held back.

Part of that is not playing in back-to-backs — Embiid started Friday night against Boston but will sit out by plan Saturday night against the Raptors in Toronto. Embiid knows the plan to help protect a body that has played only 31 games in three seasons before this one and was not cleared for most of training camp, but that doesn’t mean he likes it, as he told Jessica Camerato of NBC Sports Philadelphia.

I get his frustration, but can you blame the Sixers for treating the guy like he’s made of glass at this point? Hopefully, later in the season, he can be cleared to play on both ends.

His second frustration came from the loss to the Celtics on Friday — he wants more post touches. In the video above he is clear, “I didn’t get the ball enough in the post.”

He’s right here. Embiid had three post-ups all game, one in each of the game’s first three quarters (stat via Synergy Sports). Embiid is efficient in the post — he has shot 9-of-12 on those plays overall this season and the Sixers score 1.33 points per possession when he does. That will work especially well against teams going small (for example, the Cavaliers with Kevin Love at the five), although Friday night Boston had big man Aron Baynes starting at center (in part because of Embiid, in part because Marcus Smart was out injured). Still, Embiid can score on Baynes.

Take a look at Embiid’s shot chart from Friday night. 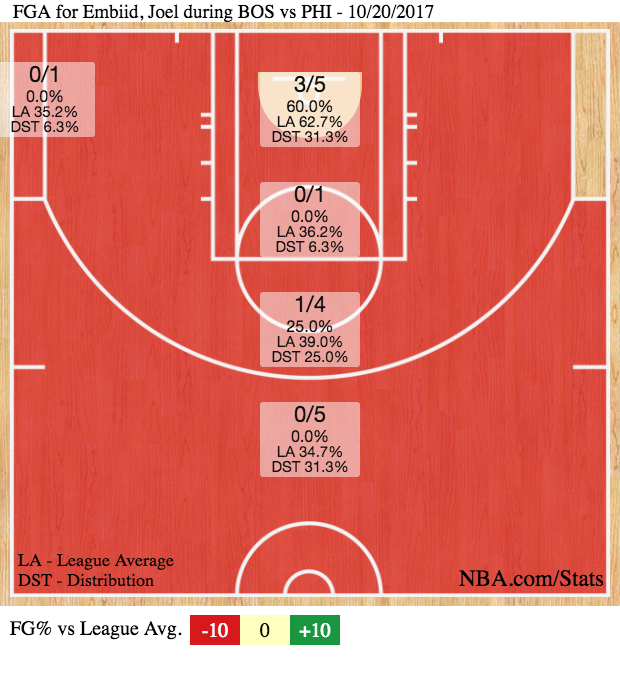 Part of this is on him with all the threes, but they have to utilize him better. It’s part of the Sixers growing pains that will come this season.