“Hope is a good thing, maybe the best of things, and no good thing ever dies.”

There has been little hope in Los Angeles for the past few years as the Lakers started to rebuild, but with Lonzo Ball in the fold there is a genuine belief that things are about to turn around and the team will be entertaining — and that has made the Lakers the league’s hottest ticket.

The Lakers are the top ticket selling NBA team on StubHub this season, the online secondary ticket market’s leader told NBC Sports. L.A.’s sales are up nearly a 130 percent from last season. Second on that team’s sales list are the always popular Knicks, with their hope invested in Kristaps Porzingis. Third is Boston, another team with a lot of hope after the additions of Kyrie Irving and Gordon Hayward — the Celtics’ sales have jumped 48 percent from a season ago, when they were seventh in the league in sales at StubHub.

Fifth on the team sales list is the Philadelphia 76ers, where the fan base has had to subsist on nothing but hope for years, but now fans think they will get fed some playoff basketball thanks to Joel Embiid, Ben Simmons, and No. 1 pick Markelle Fultz. Sixers ticket sales are up 110 percent over this time last season on StubHub.

“While recent success and offseason moves have driven demand amongst NBA ticket buyers on StubHub for teams like the Boston Celtics, we are also seeing a sense of optimism and notable increase in demand for teams that haven’t recently been in the playoffs but have rosters boasting exciting new talent, such as the Los Angeles Lakers and Philadelphia 76ers,” Jessica Erskine, StubHub spokesperson “On the road, The Warriors talent draw the highest demand with a significant uptick in ticket sales over the average NBA regular season game.”

The hottest single-game ticket this season? Dec. 18 when the Warriors visit the Lakers — Kobe Bryant’s jersey retirement game, where the average ticket price is $660. Ticket prices right now range from $510 per seat in the top of the building to $7,000 or more to be in a prime location. That shouldn’t be a shock, Kobe sells. The Kobe game has generated more ticket sales on StubHub than the No. 2, 3, and 4 games on the list combined. 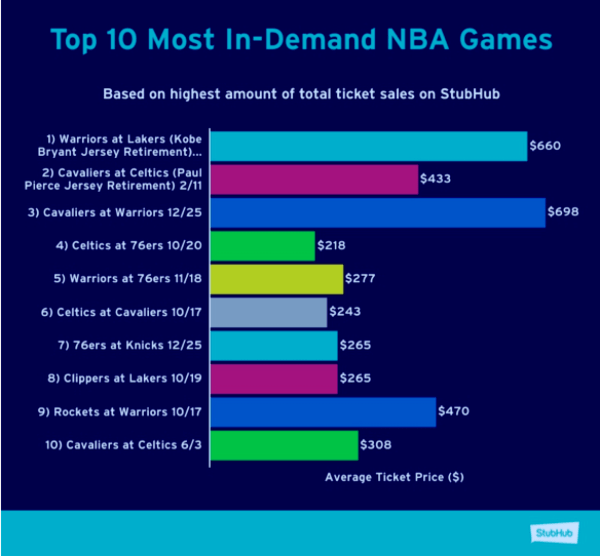 Other interesting notes on ticket sales this season:

• As Erskine of StubHub mentioned above, the hottest ticket on the road is the Golden State Warriors. When the defending champions with Stephen Curry and Kevin Durant come to town StubHub sees a sales increase of 425 percent over the league average per game.

• The most popular rivalry this season is Cleveland vs. Boston — three of these matchups are in the top 10 most in-demand games.

• Despite the dominance of Western Conference teams on the court, Eastern Conference teams have consistently driven more ticket sales on StubHub, a trend that goes back years. Despite the fact the West loaded up on the court for this season the gap continues to grow — ticket sales for Eastern teams this year surpass those for Western teams by 59 percent, the highest difference in the last five seasons.