Kevin Durant – tweeting in the third person, suggesting he forget to switch to a secret Twitter account – said he left the Thunder because he didn’t like the organization or playing for Billy Donovan and that Oklahoma City’s surrounding cast around himself and Russell Westbrook was lacking. Durant also appeared to have a second Instagram account he has used to insult critics.

I do have other another Instagram account, but that’s just for my friends and family. So, I wouldn’t say I was using that to clap back at anybody.

And I don’t regret clapping back at anybody or talking to my fans on Twitter. I do regret using my former coach’s name and the former organization that I played for. That was childish. That was idiotic. All those type of words. I regret doing that, and I apologize to him for doing that.

But I don’t think I’ll ever stop engaging with my fans. I think they really enjoy it, and I think it’s a good way to connect us all. But I will scale back a little bit right now and just focus on playing basketball. So, I want to move on from that. It was tough to deal with yesterday. I was really upset with myself. But definitely want to move on and keep playing basketball. But I still want to interact with my fans, as well.

Durant can defend himself all he wants on social media. Fans, even those who detest him, do enjoy the interaction.

But an anonymous-looking account defending Durant provides no joy to those fans. They don’t – or at least didn’t – know they were interacting with the famous basketball star. This is something else entirely. 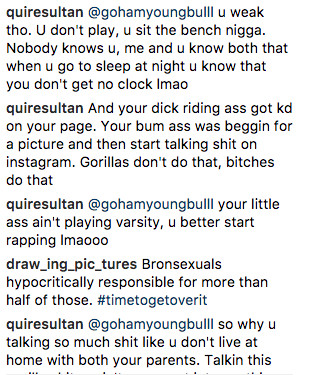 Durant denying that really makes it hard to accept this as him coming clean.