OAKLAND — Kevin Durant did what the Warriors either could not or would not one year ago.

Cleveland’s defensive plan for Game 1 of the 2017 NBA Finals didn’t change much from what worked for them in the final games of the 2016 Finals. Cleveland coach Tyronn Lue described it as “kind of backwards” — the top priority was defending the arc and chasing the Warriors off the three-point line. Last year, the Warriors kept settling for those threes anyway.

“If I see a lane, just try to attack,” Durant said of his mindset after the game. “Coach and my teammates always want me to attack and try to open it up for everybody else and try to score as well. So I felt like in transition they were running out to the three-point line, and we got the best 3-point shooters in the world on our team, so obviously, teams want to take away our 3-pointer, but just tried to be aggressive to the rim and loosen them up a bit.”

Durant took over Game 1 early, and had 23 first-half points on his way to finishing with 38 points (shooting 53.8 percent and hitting 3-of-6 from three), eight rebounds, eight assists, and zero turnovers in the Golden State. Oh, and for large chunks of the game he also guarded LeBron James and did a solid job.

LeBron said after the game that Durant was the difference that led to a Warriors rout.

“I mean, you take one of the best teams that we had ever assembled last year, that we saw in the regular season and in the post-season, and then in the off-season you add a high-powered offensive talent like that and a great basketball IQ like that, that’s what stands out,” LeBron said.

“We were talking about it before the game, and Steve (Kerr) suggested we try to get the ball in (Durant’s) hands right away and put him in position where he can attack downhill,” Warriors interim coach Mike Brown said. “So we tried to do that early on, and K.D. didn’t settle.”

No, he didn’t — look at his shot chart and the 13 shots in the restricted area. 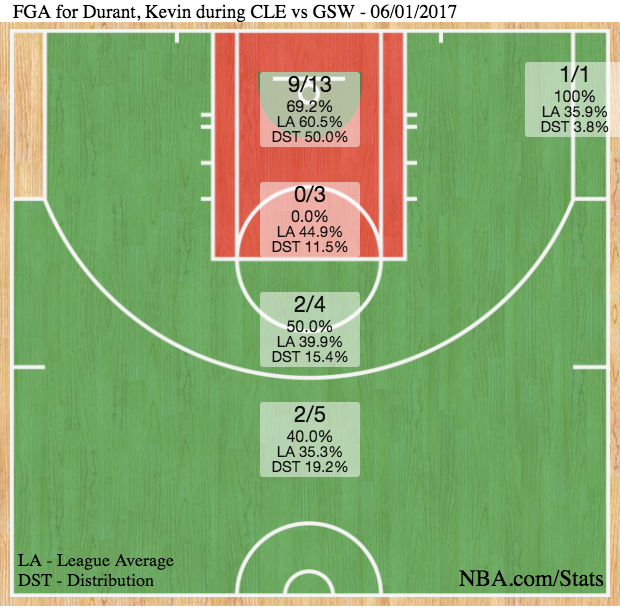 “When Kevin Durant has the ball, you don’t want to leave him and get to shooters,” Lue said. “But I thought they got him going early in the game. I thought he got out in transition, got four or five dunks early and it just kind of opened everything up for him. So we got to make it much tougher on him, can’t give a great scorer like Durant easy baskets like that, especially in transition, especially early. So we got to do a better job of taking that away.”

The challenge for the Cavaliers is how to take that away without opening up something else.

For Durant, this was his first time back on the NBA Finals stage since he was still teammates with Russell Westbrook and James Harden, and he took a moment to try to soak it all in.

“What other option did I have?” Durant said. “This is what every player wants to be, is the highest level of basketball. That’s what you dream about as a kid, is to play at the highest level. So I would have — I wouldn’t done my teammates any good if I wasn’t just enjoying the moment, no matter what. So I just tried to stay locked in on that, at the same time have some fun.”

He had some fun, and made sure the Cavaliers didn’t have any. Do that a few more times this series and he may well get a new MVP trophy to add to the case at home.