LeBron James and Russell Westbrook came within one vote of the same (one voter each had them on the second team).

While we aren’t going to know who won MVP, Defensive Player of the Year, or other NBA awards until their new ceremony June 26 (after the Finals and Draft), the All-NBA teams had to be different. Because it impacts bonuses and future contracts — most notably if players qualify for Designated Player max deals this summer — teams needed to know early, before the Draft. So on Thursday the NBA released the prestigious All-NBA team, a snapshot of the best in the game.

Here are the three All-NBA teams: 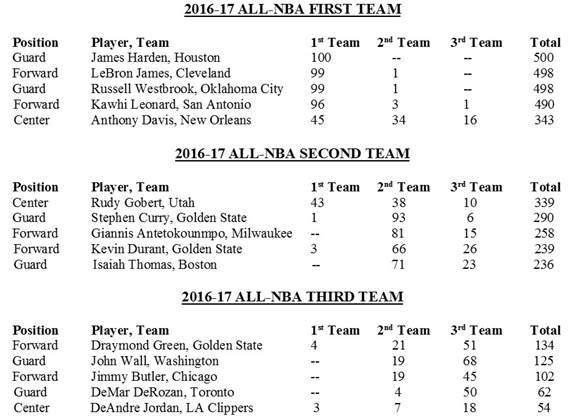 These were voted on by 100 members of the media, their votes will be made public June 26 with the rest of the award voting. (Full disclosure, I was one of those voters.)

The big takeaways: Kawhi Leonard, Russell Westbrook, John Wall, and Stephen Curry (already an MVP) are eligible for Designated Player max contracts. In the case of Leonard it would be five years at around $217 million, and while he would sign next summer it wouldn’t kick in until the summer of 2019. Wall can sign his extension this summer (he has more experience) but his deal will not kick in for a couple.

However, Paul George and Gordon Hayward did not make an All-NBA team, which could impact their summers because now the Pacers and Jazz cannot offer their stars those Designated Player max contracts. (That contract is only for players who make the team the past year or two of the last three, or are a former MVP.)

In the case of George (who made all-NBA regularly before his leg injury, now has not made it two of the last three), that means the Pacers may consider trading their star this summer. George is a free agent in 2018 and there is a lot of buzz he is going to leave (either to a contender or the Lakers), and Indiana’s new man in charge Kevin Pritchard may feel he needs to get something for George rather than just let him walk. However, the trade market for George will not be robust because teams feel he wants to be a free agent in 2018, so he could be a one-year rental.

For Hayward, it means the Jazz can only offer a little more than other teams — about $2 million a year more on average over the deal, but also a guaranteed fifth year, so it works out to $46 million more guaranteed (but Hayward would get paid somewhere that fifth season, just not as much). That may be enough to keep him, he likes Utah, but it’s known Boston — with Hayward’s college coach Brad Stevens — and other teams are going to come hard at him.

Some will question putting Anthony Davis at center, but he spent 64 percent of his time on the court this past season at the five (as tracked by Basketball-Reference.com). That likely will not be the case next season with DeMarcus Cousins in the picture.