Wednesday night’s game summed up the Thunder this season. And it summed up why Oklahoma City is outclassed in this series by Houston — Russell Westbrook had the first 50-point triple-double in playoff history. However, he was tired and inefficient late, and his 14 missed shots in the fourth quarter was also an NBA record. Meanwhile, the Rockets played team ball down the stretch.

Meanwhile, the Rockets played team ball down the stretch — their star James Harden had 35, but in the fourth quarter he got plenty of help.

That’s why Houston is up 2-0 in this series after a 115-111 victory at home, as the series heads back to Oklahoma City for Game 3.

Wednesday’s loss feels like a punch to the gut of the Thunder because they got a big Westbrook night, they had 14 point lead in the second half, and it wasn’t enough.

The first half saw the Westbrook that the Thunder wanted and the Westbrook the rest of the NBA feared — Westbrook had 22 points and 10 assists in the first 24 minutes. More importantly, he opened things up and got his teammates going — Oklahoma City had 10 more points in the paint than Houston, it had 12 second chance points, and it had seven blocked shots. OKC owned the paint. That successful team play started because Westbrook was doing stuff like this on both ends.

The fourth quarter was the flip-side of that coin.

A tired Westbrook just kept jacking up shots, many of them bad ones, and he shot 4-of-18 for the quarter, including 1-of-7 from three. After the Thunder had taken the lead back at 100-99 with 4:14 remaining, Westbrook missed his next seven shots. While that happened, the Rockets went on a run that sealed the game. Check out Westbrook’s fourth-quarter shot chart. 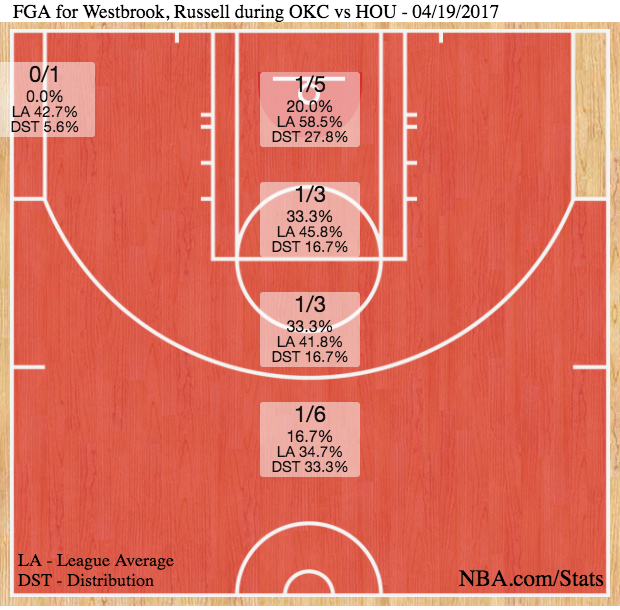 Why didn’t coach Billy Donovan rest Westbrook in the fourth? Because when he sat Westbrook for 2:21 at the end of the third the Rockets outscored the Thunder by nine and changed the complexion of the game.

More important than the poor shooting, and unlike the first half, Westbrook was not getting his teammates involved, so they started standing around and watching the show, which was a stark contrast to the Rockets who played with a team energy. How much of the OKC offensive stagnation is on Westbrook and how much of that falls on his teammates depends on which side of the chicken-egg debate you stand on, but the Westbrook one-man show did work well for them in a lot of close games this season. Wednesday night, in the glare of the postseason spotlight, it did not.

What is undebatable is the Rockets started their crucial 10-0 early fourth-quarter run with Harden sitting on the bench. Harden was rested at the end, Westbrook was tired and pulling up for shots (so the Rockets switched the longer Trevor Ariza on him to contest looks). The Rockets also got better defense in the fourth, particularly in the paint from Clint Capella, who had multiple stops when it mattered.

Harden certainly had a good night, scoring 35 points and getting to the line at will. But he went just 2-of-4 from the floor in the fourth while Eric Gordon was 4-of-7 for 11 points and Patrick Beverley was 3-of-3 for eight in the quarter. Houston had balance, they had a team effort on both ends.

And with that, those Rockets have a 2-0 series lead.