The NCAA Tournament gets back underway Thursday, but the NBA ball just keeps rolling along. Here are the big takeaways from Wednesday.

1) LeBron James says Cavaliers lack toughness. Is there trouble or are they just bored with the regular season?
Here is the unquestioned fact: The Denver Nuggets trounced the Cleveland Cavaliers Wednesday night, 126-113. There are a number of factors in this, starting with Denver is playing better than people think — the Nuggets are the fifth best team in the NBA since the All-Star break, outscoring teams by 5.6 points per 100 possessions. Jamal Murray is emerging as the ball handling guard of the future for this team, Gary Harris is a sniper, and they have solid veterans such as Jameer Nelson and Wilson Chandler. But at the heart of it all is Nikola Jokic, who is for real. Watch what he does to LeBron James here.

LeBron played it perfectly, Jokic is too good though.. Had some nasty moves down low, full vid coming. pic.twitter.com/mMgv4Mxpcw

Yes, Cleveland had to go play at altitude in the middle of a long road trip. Still…

What is going on with the Cavaliers?

Opponents have outscored them by 0.9 points per 100 since the All-Star break, and the Cavs are playing terrible defense (second worst in the NBA since the break). Asked in Denver after the loss what is wrong with the Cavs, LeBron said the team lacked toughness, via Dave McMenamin of ESPN.

“It ain’t about a group. It’s about individuals,” James said… “We’ve got to be more, just do more. It ain’t about no group. You can’t preach toughness. You’ve got to have it.”

“Personally? I had opportunities where I could have been better,” James said before firing back with a rebuttal. “Um, one thing about it: I always bring toughness to the game. I know that. That’s for sure.”

LeBron is clearly challenging his team to get serious on both ends and to start getting in playoff mode.

To me, the Cavaliers look bored. As in the real season starts in a couple of weeks with the playoffs, and they feel they can flip the switch then, but right now the regular season feels like a tedious slog. That’s what it looked like in Denver. Before that, I watched the Cavaliers in person against the Lakers Sunday, and LeBron James played well enough all game, Kyrie Irving and Kevin Love were getting theirs, but the team lacked any urgency, and it showed on defense. The tanking Lakers hung around. Then, LeBron seemed to say “screw this” and for a five-minute span took charge of the game, looking every bit the best player on the planet, the rest of the Cavaliers quickly fell in line, Cleveland took control of the game, and they coasted from there to the win.

That was against the Lakers, the worst team in the NBA since the All-Star break and a team playing youth everywhere. Denver is legit right now, they are playing well, and the Cavs couldn’t just flip the switch on Wednesday. Jokic and Mason Plumlee led the way as the Nuggets scored 70 points in the paint.

It’s still hard to picture any team in the East beating Cleveland. However, they have not spent the regular season building good habits to fall back on when the eventual challenge comes in the playoffs. There’s been a lot of comparisons to the 2000-01 Lakers, a defending championship team that battled injuries and didn’t impress in the regular season, looked bored on defense, then flipped the switch in the playoffs and went 16-1 on the way to the title. Maybe. But teams that flip the switch are the exception, not the rule.

The bored Cavaliers are playing a dangerous game, but will it haunt them before June? Can any team in the East make them pay?

2) The Knicks have no answer for Rudy Gobert, Jazz thump Knicks. Rudy Gobert is a defensive powerhouse of a big man, the best rim protector in the game and a man on his way to winning Defensive Player of the Year. That was a problem for the Knicks on Wednesday night. A bigger problem — they couldn’t stop him on offense around the rim. Gobert at 35 points on 13-of-14 shooting, with 11 offensive rebounds. The Knicks went small for stretches (with Kristaps Porzingis, but he isn’t strong enough to handle Gobert), other times Willy Hernangomez tried but could not slow Gobert, and the French big man feasted. Check out Gobert’s shot chart. 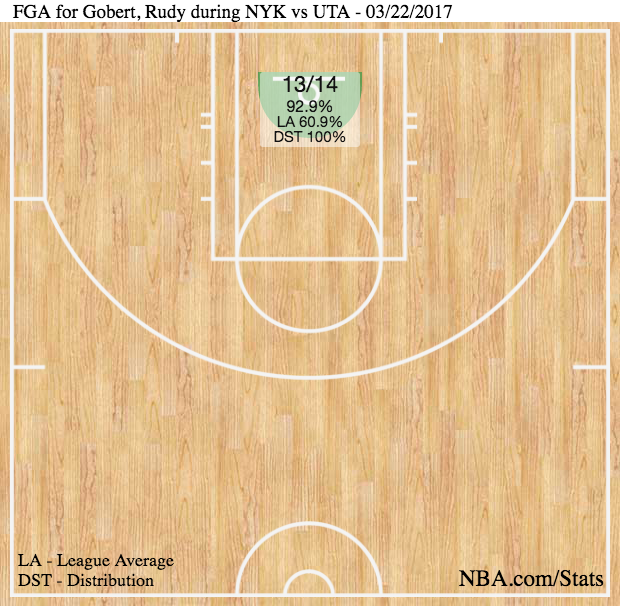 Or, just watch what he did to the Knicks.

The Knicks started hot in this game behind vintage Derrick Rose for a quarter, but they can’t sustain that kind of play against a quality team. Utah is a quality team (I think they can beat the Clippers in the first round), and the foundation of that is in the middle.

3) Russell Westbrook notches 35th triple-double with perfect shooting, Thunder attack the rim and get the win. Let us formally acknowledge that Russell Westbrook is very, very good at basketball. He had 18 points, 14 assists, 11 rebounds, and was a perfect 6-of-6 from the field. That would be the first perfect shooting triple-double in NBA history. How’s that for adding to the MVP resume.

As for the game, the Thunder attacked the paint and the Sixers had no answers. OKC won 122–97, scoring 76 points while knocking down just four 3-pointers.