We know things get weird and busy for you, like trying to convince police not only did your dog eat your homework he shot your girlfriend, so you missed out on a busy Monday around the NBA. We got you covered, here are the big takeaways.

1) Kyle Lowry’s out, so DeMar DeRozan steps up with game-winner to beat Knicks. Monday started with harsh news for the Raptors: Kyle Lowry needed wrist surgery and was going to be out until around the start of the playoffs. Yes, he played in the All-Star Game through it (and was in the three-point contest), but the surgery is there to remove loose bodies, something that builds up over time rather than happening in one traumatic moment, it just caught up with him. It happens.

It just happened at a bad time — with the trade deadline additions of Serge Ibaka and P.J. Tucker, the Raptors were trying to make a push back up to the three seed (at least) and set themselves up for a deep playoff run. They want out of the four seed, which would mean facing Cleveland in the second round. In the three games since the trades the Raptors defense has been improved, but now where will the points come from?

DeMar DeRozan. He had 37 Monday night against the Knicks, including the game-winner in Madison Square Garden.

This is going to have to be the norm for DeRozan and the Raptors for the next month or so — DeRozan is going to have to carry the offense. Other guys can score — Ibaka will get some buckets, Jonas Valanciunas will have good nights, as will Cory Joseph and Norman Powell — but buckets and shot creation will fall heavily on DeRozan. With the win over the Knicks the Raptors moved past the Wizards into the three seed in the East, if they stay there will fall in large part on DeRozan, he has to step up.

2) Dwight Howard ejected, then NBA says it was a bad call. Doesn’t matter, Hawks beat Celtics anyway. Dwight Howard got tossed in the Boston Garden Monday night for picking up a couple technical fouls. The first one was well deserved, pushing Al Horford after a foul.

The second came for doing a pull-up on the rim after a dunk.

The NBA didn’t wait for the two-minute report to say that was a bad call.

The following is being released by the NBA: pic.twitter.com/O0biF3XBF2

Interesting. The NBA says that should have been a technical, however “non-unsportsmanlike technical fouls” such as calling a timeout when a team doesn’t have one, delay of game, having an untucked jersey, and hanging on the rim should not count toward an ejection.

Doesn’t matter, not long after he was tossed the Hawks went on an 8-0 run without him that stretched into a 22-11 run, and the Hawks pulled away to beat the Celtics anyway (a rough loss for Boston in the playoff chase, see No. 1 above). Dennis Schroder led the way with 21 for the Hawks.

Maybe hanging on the rim shouldn’t have gotten Howard tossed, but consider the Karmic scales balanced after he did this to a fan who wanted his jersey.

Dwight you're cold for this. 😂 pic.twitter.com/lzJGDoMI02

3) Stephen Curry goes ice-cold 0-of-11 from three. Not that it matters, Warriors beat Sixers 119-108. Here is Stephen Curry’s shot chart from Monday night in Philadelphia. 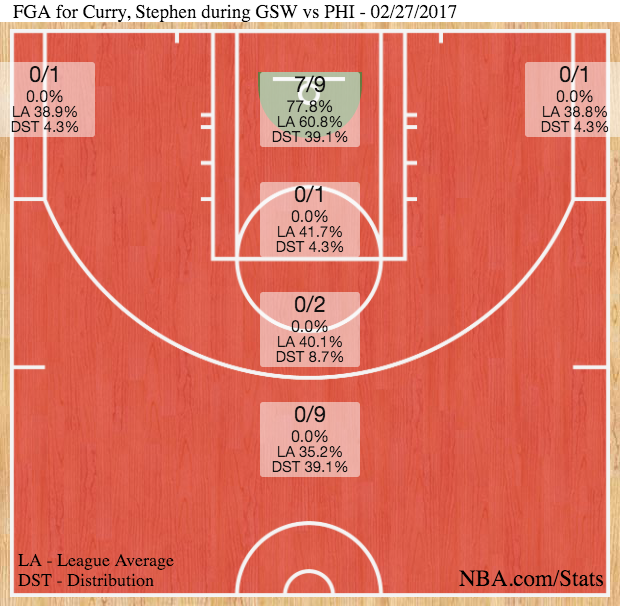 That’s redder than a certain district of Amsterdam, and notice that Curry was 0-of-11 from three.

Didn’t matter, these are the Warriors we are talking about. And while the Sixers are scrappy under Brett Brown, they don’t have Joel Embiid or Ben Simmons or anyone that really scares opponents anymore. Kevin Durant had 27 points, Klay Thompson added 21, and while the Warriors as a team shot 20 percent from three they got the win in Philly 119-108.

Sit back and enjoy KD’s work on the night.