It’s Monday, and you have other important things to do — such as follow the exploits of the “Trumpagator” — so you may not have been focused on the NBA. We’ve got your back, here are the big takeaways from a night in the NBA.

1) Nuggets serve Warriors slice of “humble cupcake.” This is the NBA — if you don’t take an opponent seriously, you will get humbled. Everybody in the NBA can ball. As an example, let’s say you are the best team in the NBA — fresh off an emotional thrashing of a rival in Oklahoma City and wearing cupcake shirts — and you roll into Denver to take on a Nuggets team without Danilo Gallinari, Kenneth Faried, Wilson Chandler, Darrell Arthur, Emmanuel Mudiay or just acquired Mason Plumlee. Easy win, right?

Denver could not miss from the outside Monday night, tying an NBA record with 24 made threes, on their way to thrashing the Warriors 132-110. Don’t come ready to play in the NBA, you get beat.

Stephen Curry: "We just got served a humble slice of cupcake."

Denver’s star Nikola Jokic had his second career triple-double with 17 points, 21 rebounds, and 12 assists. Juan Hernangomez had a career-high 27 points including hitting six threes. When I say Denver couldn’t miss from the outside, look at their shot chart. 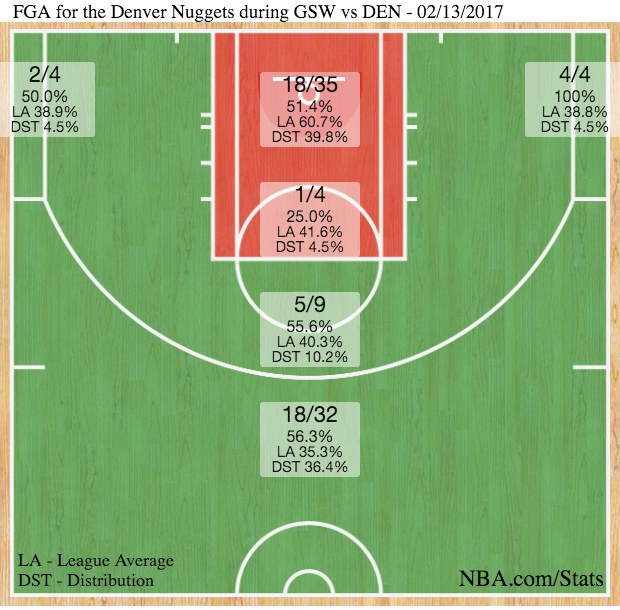 Let’s not be silly and say this could portend something if these two teams meet in the playoffs (as of now this would be the first-round matchup). This was a one-off. Golden State is the better team, Monday night Denver was the hotter one. The win also speaks to why Denver may be good enough to hold on to that final playoff slot, and serves as a reminder you can’t just roll the ball out there and expect to get a win in the NBA.

With a 110-106 win over the Pacers on Monday, the Spurs improved to 42-13, ensuring the franchise’s 20th straight winning season. The last time the Spurs had a losing season (1997) gas cost $1.22, a movie ticket was $5, Tiger Woods won his first Masters, and the Notorious B.I.G. was shot. And remember, they had seven winning seasons in a row before that one, they only fell off the map in 1996-97 due to injuries to David Robinson and others (the Spurs ended up with the No. 1 pick out of that terrible season and drafted Tim Duncan).

It’s amazing how consistent this franchise is, and while Gregg Popovich and R.C. Buford deserve all the credit they get, that kind of consistency starts at the ownership level. There is not a better run organization in sports.

3) Charlotte loses again, this time to Sixers, and it’s stunning to see how far this team has fallen. When the calendar flipped to 2017, the Charlotte Hornets were 19-15, with a pedestrian offense carried by Kemba Walker and a top 10 NBA defense.

Since then the Hornets have gone 5-16, with a pedestrian defense overall and an offense that is bottom 10 – it Kemba Walker against the world.

Nicolas Batum tried to motivate the team by guaranteeing a win Monday night against the Sixers. It worked to motivate a team — Philadephia. The Sixers — playing without Joel Embiid (injury) or Jahlil Okafor (holding him out due to serious trade talks) — outworked the Hornets on the glass, and the Sixers won 105-99.

It must be something in the water in Charlotte, first the Panthers under perform and now the Hornets. Charlotte has a decent roster, a good coach, we thought the loss of Jeremy Lin and the depth might have this team take a small step back from last season, but not just drop off a cliff. This team simply should not be as bad as it has been the past couple months, even with the injury to Cody Zeller. Yet here we are. The Hornets are not physical enough, and while other teams — like the Sixers — are coming together the Hornets are not improving and seem to be pulling apart. It’s hard to picture this team making the playoffs at this point (they are just 1.5 games out of the eight seed, but the way the Hornets are playing does not portend a turnaround).

GM Rich Cho, owner Michael Jordan, and coach Steve Clifford need to have a real tough postmortem after this season and figure out how to get this roster moving forward. There is too much talent in Charlotte for this team to be this bad.