There are times, when they get tested in a close game, that we see tension bubble up with the Warriors. They don’t get in this situation often, but it happened again in a loss to the Kings over the weekend, when Draymond Green and Kevin Durant had words. Something that has happened before.

In this case, late in the third quarter Durant had the ball in isolation, couldn’t create the shot he wanted against DeMarcus Cousins, then passed to Green as the shot clock was winding down, forcing him to jack up quick three.

Green did not like that, which led to this.

During last night's game vs. the Kings, Kevin Durant & Draymond Green got into a heated exchange pic.twitter.com/jD7VN0TbkT

That video made news Sunday. Green then took to Snapchat to express how he feels. 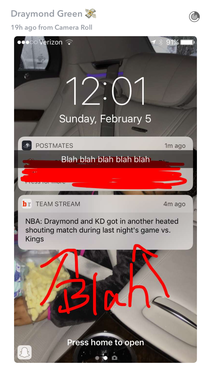 Teammates have words occasionally, and usually it’s meaningless in the big picture. Green and Durant are competitive guys, and the Warriors had probably their worst game in a month in the loss to Sacramento (do give the Kings some credit here, Cousins, in particular, was phenomenal). This is probably nothing.

But as the Warriors rampage through the NBA this season, it’s fair to ask how they will respond when actually tested. We may not find out until deep in the playoffs, however.