Toronto Raptors star Kyle Lowry is arguably the team’s best player thanks in large part to his increase in 3-point shooting ability this season. He’s just above 43 percent from deep this year, much better than his career average of 36 percent. Lowry has increased his 3-point percentage six points over last season, and he’s a big part of why the Raptors are so good on offense, and why they’re a contender in the Eastern Conference.

So how does he do it?

Watch the full video breakdown on Lowry’s 3-point shooting above, or read the text version of the article below.

I looked at a lot of tape of Lowry over the last 3 years and he hasn’t changed much on his shot mechanics. There’s no big change in his sweep or sway toward the basket when he shoots, and he still brings the ball up from his left side.

Part of his leap is be how quickly he’s getting his shots off and how many of his early offense field goal attempts come in the form of 3-pointers. 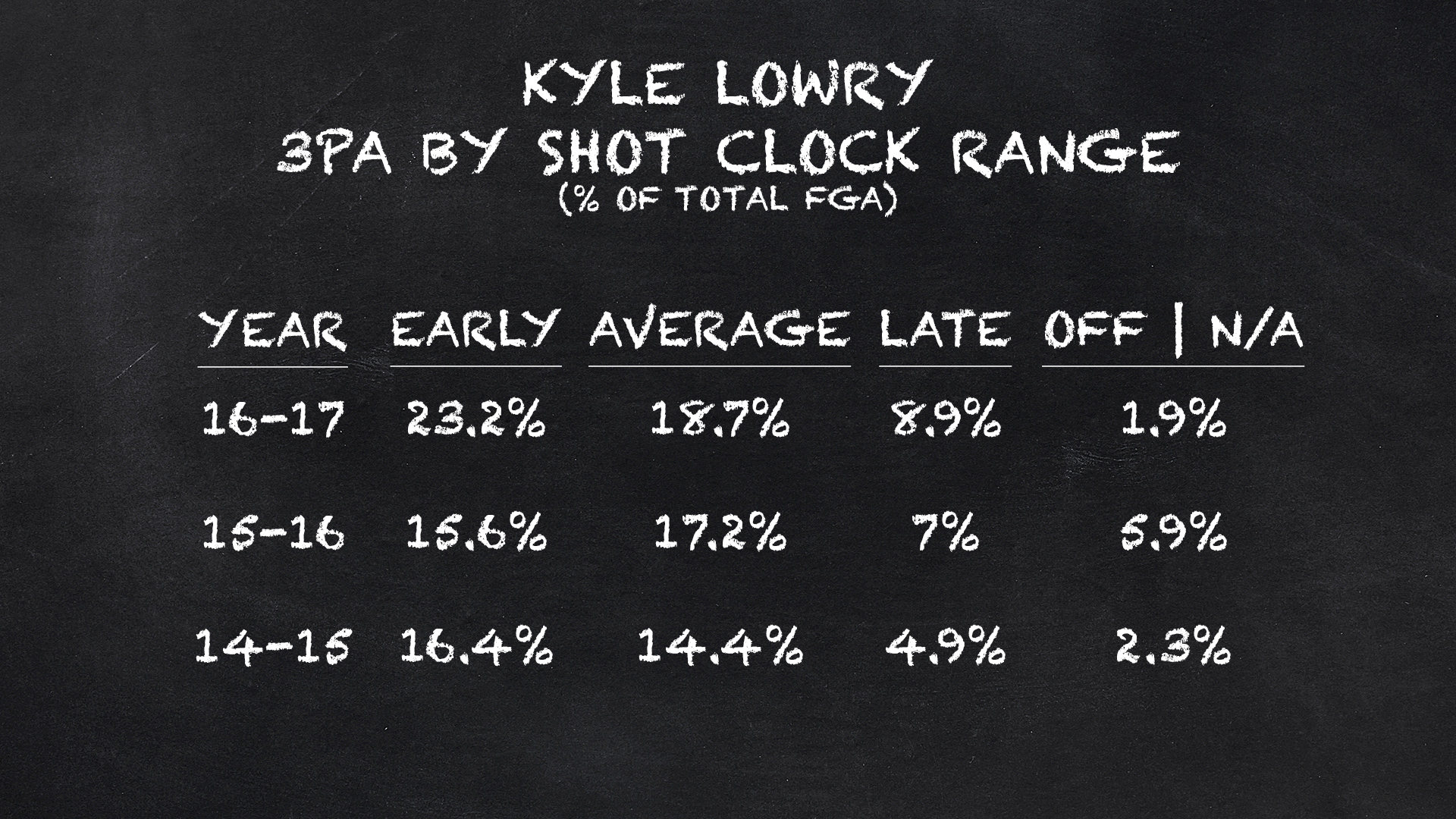 Lowry has bumped up how many 3-pointers he’s taken in the early offense, recorded here as between 24 and 15 seconds on the shot clock. Year-over-year he’s taken nearly eight percent more of his field goals as three pointers in this range.

This takes form on the court in a couple of ways, both in transition on the fast break and on quick 1 or 2 dribble pull ups off the pick-and-roll.

With the ball in secondary transition here, Lowry gets a quick screen from DeMarre Carroll to open him up for a 3-point bucket against the Hornets. And that’s still with 18 seconds left on the shot clock!

The other way Lowry scores quickly is off the dribble, with quick pick and rolls. Toronto is great at screen assists — picks leading to an immediate field goal — and have three players in the Top 50 and two in the Top 10 in setting them.

Here, the Celtics defender cuts off Lowry’s attack to the middle of the floor. The screener sets up to Lowry’s right, but then quickly flips it to his left. One dribble, and it’s an easy 3-pointer.

Here against Portland, the Raptors run a two screen setup with one wing and one post. The Blazers make the switch and try to blitz Lowry, but he stays resilient and sinks the bucket with what little space they allow him anyway.

The other thing that’s been talked about a lot is the gravity of DeMar DeRozan, who himself is having a career year for the Raptors. While Lowry is making a ton of unassisted 3-pointers this year, the Raptors point guard does benefit from DeMar.

Part of that is how good they are in transition together.

Here you can see DeMar bringing the ball up the court with Lowry in front of him. He sets the screen, then fades to the arc. Three Utah Jazz are trying to stop DeRozan, and Lowry is left all alone.

When he’s not the primary ball handler on the break, Lowry will immediately get out to the wing. DeRozan has a way of finding him to get up quick Js.

Of course, in good old set plays the Raptors see this gravity effect as well.

Here Toronto is running another double screen with a guard and a post, but Lowry is one of the screeners. At this point, all three Heat players are guarding against DeRozan’s midrange jumper, leaving just enough daylight for Lowry.

Toronto is also third in the NBA in “hockey” or secondary assists, which means two or more passes leading to a made field goal.

On this baseline out of bounds play, again it’s DeRozan’s gravity that frees up Lowry. As the ball is inbounded, DeRozan sucks three warriors defenders with him, including Lowry’s. Meanwhile, Kyle is running down the baseline to get a bucket off a pass on the opposite side of the floor. All the raps have to do is rotate the ball.

So that’s a little bit on why Kyle Lowry has been so good. It’s been about shot selection, decisiveness, and some practice in addition to the effectiveness of his teammates.