Kyle Korver is now a member of the Cleveland Cavaliers. The Atlanta Hawks and Cleveland Cavaliers finalized the deal on Saturday, sending the sharp-shooting wing to Ohio in exchange for Mike Dunleavy, Mo Williams, and a protected first round pick.

Korver is added firepower for the 2016 NBA Champions, who are hoping to repeat and stay their ground against the Golden State Warriors, who added a guy by the name of Kevin Durant this offseason.

On today’s NBA Playbook, we’re taking a look at what Korver does best and how LeBron James and the Cavaliers will integrate him into their already impressive offense.

Watch the full video breakdown above or read the text version below.

Korver is a great addition for Cleveland’s championship hopes, and the trade should help push the Cavaliers forward. Korver is shooting better than 40 percent from 3-point land this season, and his ability to space the floor is unquestioned. 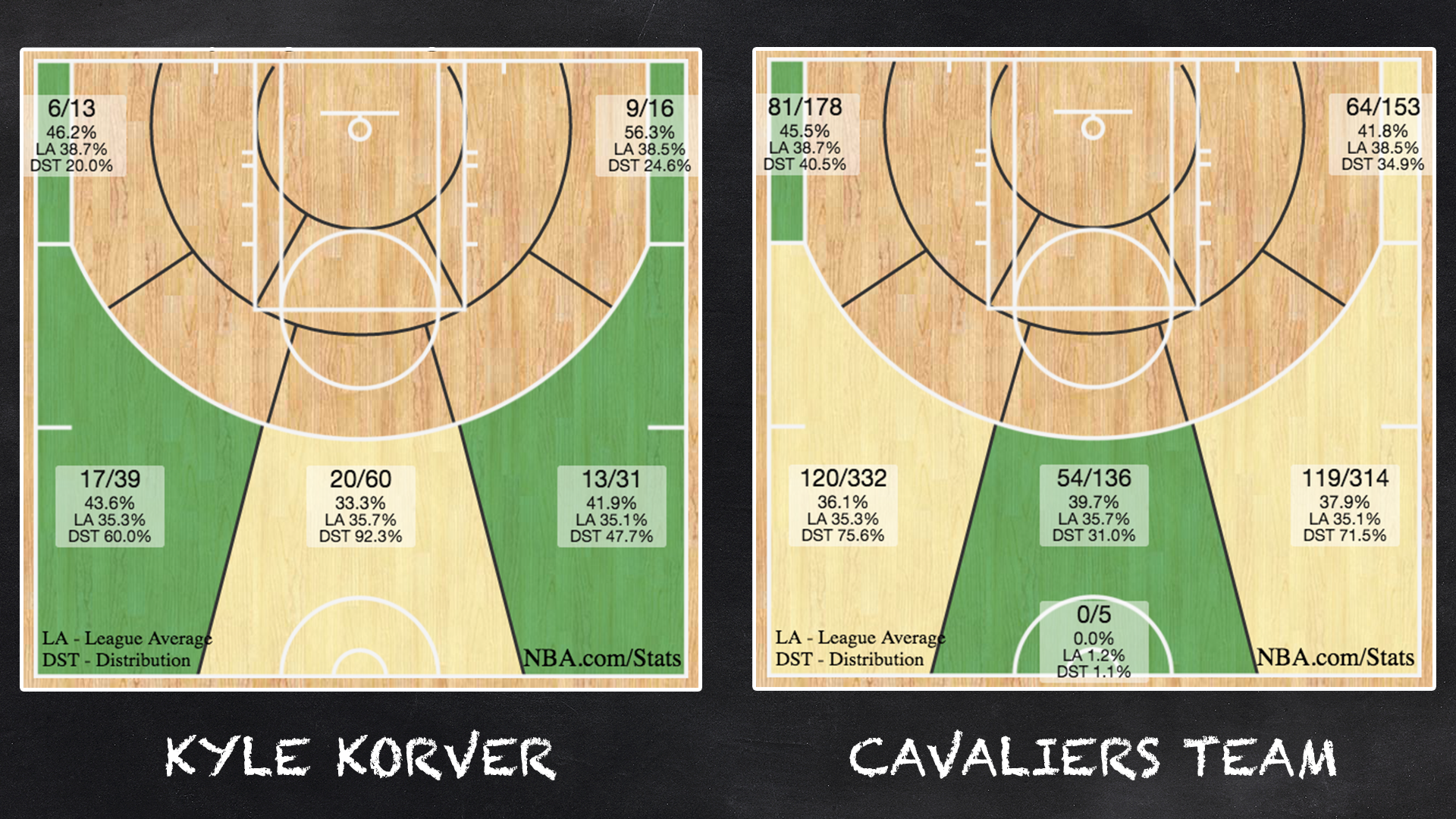 Comparing his shot chart here on the left with the Cavaliers overall team chart on the right, you can see that he takes a high volume and shoots exceptionally well on above the break threes from the left and right sides. Conveniently, that’s already where the Cavs shoot the majority of their 3-pointers from.

From a distribution standpoint, Korver makes a lot of sense. There’s also some similarities between sets the Hawks ran for him and those the Cavaliers already have in their playbook.

Atlanta ran a lot of single and double screen sets with Korver starting down in the corner. He rounds the arc off a dribble handoff from a post, and gets a simple shot above the break.

Cleveland runs the same type of sets and will plug Korver in nicely. pic.twitter.com/fgKxXLM95a

Cleveland runs this same set, as you can see here with Mike Dunleavy down in the corner and Channing Frye as the handoff man.

That kind of movement is likely to be important for Cleveland not just in their set offense, but in transition where they are one of the best teams in the league off the break.

Because of the gravity of guys like LeBron James and Kyrie Irving, Cavaliers shooters can feast in transition.

Korver runs that same cut in transition quite a bit. pic.twitter.com/iR8RZFfpPO

Look for Korver to get to the wing in transition like he does here, then make that same cut across the arc we saw in the set play above.

Korver should be extremely useful on the break. His quick release, willingness to run to the corners, and understanding about how to use drag screens and find open parts of the floor in secondary transition is going to make the Cavaliers that much harder to cover as LeBron, Kyrie Irving, and even Kevin Love bring the ball up the floor.

One of my favorite things about this trade is the high basketball IQ the Cavaliers have and how Korver is going to amplify that. Something to watch out for is how much Korver affects the efficiency of Cleveland’s offensive rebounding chances.

If you watch enough tape of Korver, you’ll see him smartly move to the right part of the floor when his team misses, turning extra opportunities into three points.

The Cavaliers are already a good rebounding team, and they like to exploit opportunities similar to the one Korver does above with guys like Kevin Love and Channing Frye. With Korver in the mix, it might be even more critical to keep Cleveland off the offensive glass.

Opening Up the Floor

There’s a lot of talk about all the opportunities the Cavaliers are going to open up for Korver, and that’s correct. But what I’m looking forward to is how Korver opens up space for his teammates.

Korver will be useful to clear space for other players. Here everyone panics about Dunleavy, setting off chain of events for Frye 3-pointer. pic.twitter.com/9Tkc6uMTET

When you have a multiple-player screen situation like you’ve got going on above, personnel matters. You’ve got three Toronto Raptors defending Frye, Dunleavy, and Iman Shumpert, who are all threats to score from range.

Kyle Lowry calls out a switch, but Terrence Ross is so afraid of Dunleavy going over the pick that he tries to lock and trail. That’s the position Korver will be in for the Cavaliers.

Meanwhile, Pascal Siakam can’t sag off of Frye, but when Shumpert slips the screen because everyone is playing high, it forces the Raptors big man to play help. Of course, that leaves Frye open at the wing, and it all started because nobody wanted to let Dunleavy shoot from deep.

Adding Korver to a team that’s already a good offensive and 3-point shooting team is an excellent move for the Cavs, and when JR Smith is back from injury it’s going to be that much better.

Korver makes it so Cleveland’s rotation will always have multiple 3-point threats on the floor, even after substitutions, which in turn will pressure opponent defenses and open things up for everyone.

The trade was a great move, and I’m excited to see the Cavaliers bolster themselves for another championship run.