If you grew up a hoops fan in America, you know who Jason Kidd is — NBA champion, gold medalist, six-time All-NBA, nine-time All-defensive, 10-time All-Star, future Hall of Famer and one of the great point guards ever to play the game. He’s now the Bucks’ coach.

Giannis Antetokounmpo didn’t grow up in the United States.

Antetokounmpo’s adjustment from a guy playing in the Greek second division to budding NBA superstar — this year he should play in his first All-Star Game — is the focus of a brilliant feature by Lee Jenkins at Sports Illustrated. You should read the whole thing. But as an illustration of how little Antetokounmpo knew about the NBA, there is this anecdote from the story.

The first time Kidd benched him, Antetokounmpo was irate. “I was like, ‘Let’s see what this guy did in his career, anyway,’ ” Antetokounmpo recounts, and called up Kidd’s bio on his phone. “I saw Rookie of the Year, NBA championship, USA Olympic gold medal, second in assists, fifth in made threes, blah, blah, blah. I was like, ‘Jesus freaking Christ, how can I compete with that? I better zip it.’ ”

Kidd has come to trust Antetokounmpo more and more, and has unleashed him as a point guard in the Bucks offense (which is eighth best in the NBA this season). He has all the skills. He is a relentless driver of the lane — Antetokounmpo leads the NBA in points in the paint per game (more than DeMarcus Cousins, although Cousins does have a better outside shot). Antetokounmpo knows to finish, and he is a gifted passer learning how to run the offense.

Imagine how dangerous he will be when his jumper becomes consistent? Look at his shot chart for the season: 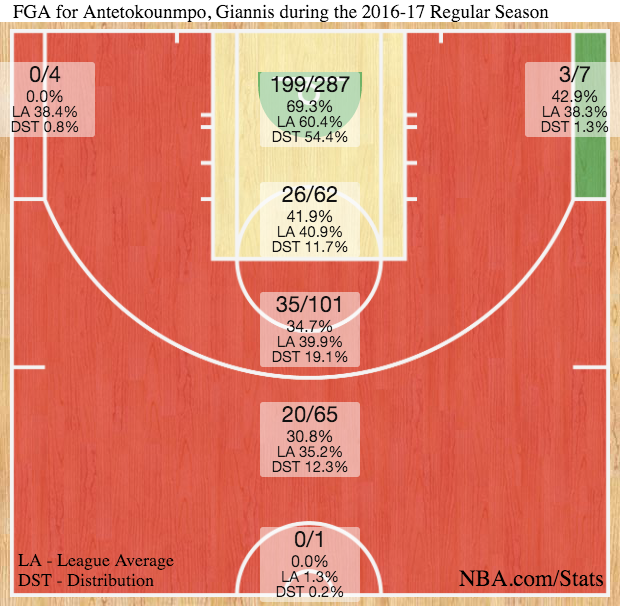