Things could be worse for you: You could be the person printing the Christmas Day prayer and carol book for a church service in Sri Lanka, the person who substituted the traditional “Hail Mary” prayer with the words to Tupac’s 1997 “Hail Mary” — “I ain’t a killer, but don’t push me.” The Raptors may have had a rough night, but not one that bad. Here’s the Wednesday takeaways from around the NBA.

1) Toronto is very good, but was reminded of its place in loss to Warriors. The Warriors turn the ball over too much — they turned the ball over on 20 percent of their possessions Wednesday night. One in five trips down the court ended in a Warriors turnover. Kevin Durant had six of them himself.

But only Cleveland seems able to make the Warriors pay for it. Toronto certainly couldn’t. Toronto came into Golden State looking for a glimmer of hope that they could climb past that second tier in the NBA they are on — the Raptors had won 8-of-9 and were just a game back of Cleveland in the East. Surely this was a team that could run with one of the NBA’s two big dogs, right?

Golden State was up 42-17 after one quarter, and the Warriors shot 72 percent for that frame. Shot charts don’t look much better than the Warriors first quarter: 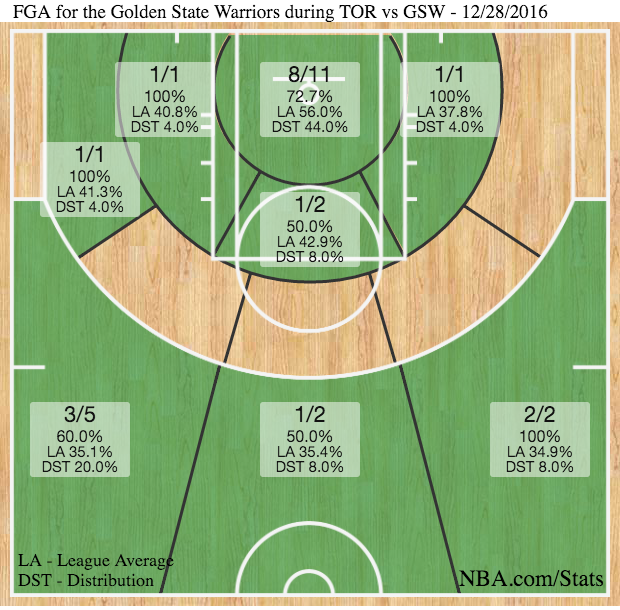 The Raptors are scrappy and fought back to make it a five-point game in the second, then Toronto coach Dwyane Casey stuck with big man Jonas Valanciunas too long against the Warriors small lineups at the end of the second and the Warriors went on another run and led by 17 at the half. The Raptors turned all those Warriors turnovers into 26 points, which allowed them to make the game respectable at the end — 122-111 Warriors — and while Toronto made its late push to this game never really felt in doubt. Stephen Curry had 28 in the win.

Too many fans underestimate how good this Raptors team is — they won 56 games last season and went to the Eastern Conference Finals last season, this season they are on pace for 58 wins and the two-seed in the East (only Boston, as it starts to come together, looks like a team that would have the potential to keep the Raptors from a return to the ECF). Toronto has the best offense in the NBA this season (yes, better than the Warriors statistically) and the second best net rating (+9.5 points per 100 possessions). This is a very good team. But they are 0-3 against the Cavaliers this season and the Warriors offered the same assessment — the Raptors are on the second tier.

2) Trail Blazers snap six-game losing streak against Kings in battle of teams eyeing eight seed in West. There is a lot of basketball to go this season, things can change, but the West seems to be shaping up with seven teams as playoff locks barring major injuries — the Warriors, Spurs, Rockets, Clippers, Thunder, Jazz, and Grizzlies — then there is a five game drop to anyone else. That could leave the Kings, Nuggets, and Trail Blazers fighting for the final playoff slot in the West (New Orleans can enter this discussion if it strings some wins together, but we need to see that first).

Which is why Portland snapping its six-game losing streak — and Sacramento’s four-game winning streak — on Wednesday night mattered. Portland won comfortably 102-89, which leaves Sacramento and Denver tied for the eight seed at 14-18, with the Blazers just one game back. There were no DeMarcus Cousins/Meyers Leonard fireworks this time around, although Leonard did have an impressive game with 16 points off the bench.

The Blazers strategy clearly was to make life difficult for Cousins and dare any other King to beat them. Without Rudy Gay (he’s missed seven of the last eight) they couldn’t — Kings players not named Cousins shot 38.3 percent overall and 6-of-22 from three. It wasn’t good enough, the Kings offense was entirely too stagnant against a Portland defense that has been the worst in the NBA this season.

Portland got 20 points out of C.J. McCollum, but it was more about balance as six Blazers scored in double figures, and as a team they shot 48 percent from three.

The race for the eight seed in the West could be very interesting the rest of the season, and it could well impact the trades the Blazers and Kings look to make — and don’t look to make — as the trade deadline starts to loom.

3) There was Lopez on Lopez crime. It’s easy to say the shot of the night was Jimmy Butler‘s game winner lifting the Bulls past the Nets. We don’t like to do things the easy way.

My favorite video of the night was from that same game: Brook Lopez putting brother Robin Lopez in a poster.