The biggest thing to happen in the NBA Sunday? Future Hall of Famer Tim Duncan got his number retired. Gregg Popovich was emotional, and Tim Duncan cracked jokes. It’s a must watch. But we knew Duncan was legendary, here are the things we learned on Sunday in the NBA.

1) Looks like the Clippers will be without Blake Griffin for few weeks, which continues an annual trend. Remember when we were asking if the Clippers could sustain their best-in-the-NBA level of play when they came out of the gate 14-2? Well, they have gone 6-6 since then with a middle-of-the-pack defense. So, no, they couldn’t sustain it.

Now things get worse — Blake Griffin is expected to be out a few weeks for knee surgery, cleaning up some soreness in his left knee. (This is not confirmed yet by the team, which was traveling home Sunday, but very likely will be on Monday.)

Griffin has averaged 21 points, 8.9 rebounds and 4.6 assists per game this season. He is part of the second-most used five-man lineup in the NBA, the Clippers starting five — they are outscoring opponents by 16.2 points per 100 possessions when he is on the court. The Clippers numbers drop off fast when the bench gets involved, and it’s going to be involved a lot for the next few weeks.

I know what you’re saying, “but the Clippers always go on a run when Griffin gets his annual injury.” Not sure that happens this season when you look at what happens to the rotations. Doc Rivers will likely start his son Austin Rivers at the three, and slide Luc Mbah a Moute to the four spot giving the Clippers a small lineup that, in theory, can shoot. Then they run a lot of Chris Paul/DeAndre Jordan pick-and-rolls. Which has worked well as an offense in the past, but I’m not sold on the shooting working as well. Plus we likely see a lot more Alan Anderson and Paul Pierce, which is a steep drop off from the defense Griffin was playing.

The injury also could cost Griffin a lot of money. For several years Griffin was a staple on the All-NBA teams, but he didn’t make the cut last year (he was injured much of the season), and this could be a big setback for him as well — the forward spot is very crowded and it was tough to fit him in the six slots before. Now it gets much harder. Why this hurts is that the new “designated player” rule in the CBA that would allow the Clippers to offer a five-year, $207 million deal to Griffin is believed to be tied to the All-NBA team (either the season or two seasons before, although this is not confirmed). If Griffin doesn’t meet the qualifications, the Clippers can’t offer him that extension this summer, costing him about $6 million a season over the course of the contract.

2) Don’t ignore that the Wizards beat the Clippers and have won five of six. While the Clippers seem poised for a slide, the team that beat them Sunday is suddenly hot — the Washington Wizards have won five-of-six and are suddenly 12-14 and just a game back of the final playoff slot in the East.

The Wizards are making this offensive push for a few reasons — they are running more plays for John Wall off the ball, and his quickness makes him a beast off the weakside. Also, the bench — which was an abject disaster early in the season — has found a bit of a rhythm. Kelly Oubre is averaging nine points a game in December, and Trey Burke is looking like the kind of backup point guard the Wizards hoped he would be. Plus, the Wizards are nailing their midrange shots (we’ll see if that’s sustainable). Look at the shot chart from the last six games. 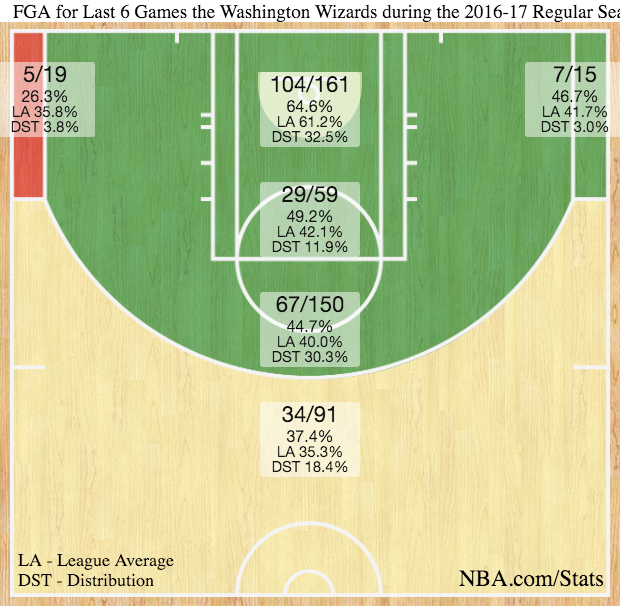 Before the season we thought the Wizards would be a team in the playoff mix in the East, then they quickly looked like the most disappointing team in the league. Now, they are back in that potential playoff mix. Bradley Beal and Otto Porter are having strong seasons, suggesting this isn’t a fluke. Still, sustaining any kind of success has been an issue for the Wizards for years, we will see if it can happen now.

He dropped a career-best 33 on the Nets, leading the Sixers to a win on Sunday. Of course he did most of his damage inside, but he knocked down he was 3-of-6 in the midrange and 2-of-3 on straight-away three-pointers. That kind of range makes him tough to guard.

Plus the guy just hustles.