Just a word of advice to our readers: This holiday season designate a driver, call a cab or Uber/Lyft, but don’t drink and drive. For a lot of good reasons. Including avoiding having to listen to Nickelback. Now, on to what we learned Wednesday around the NBA.

1) Pistons beat Celtics, finding ways to keep head above water as Reggie Jackson’s return nears. The Detroit Pistons played some of their best basketball of the season Wednesday night. A bottom-10 team in assisted shots, the Pistons moved better off the ball and found the open man more often. It all started with Ish Smith at the point, who has had a couple nice games in a row and Wednesday was pushing the pace, was curling off picks beautifully, and hit 75 percent of his shots to finish with 19 points, eight assists and eight rebounds.

Also, the Pistons just hit shots — Boston dared Detroit to shoot from the midrange, and the Pistons took advantage and knocked down the looks. Shot charts don’t get much better than this. 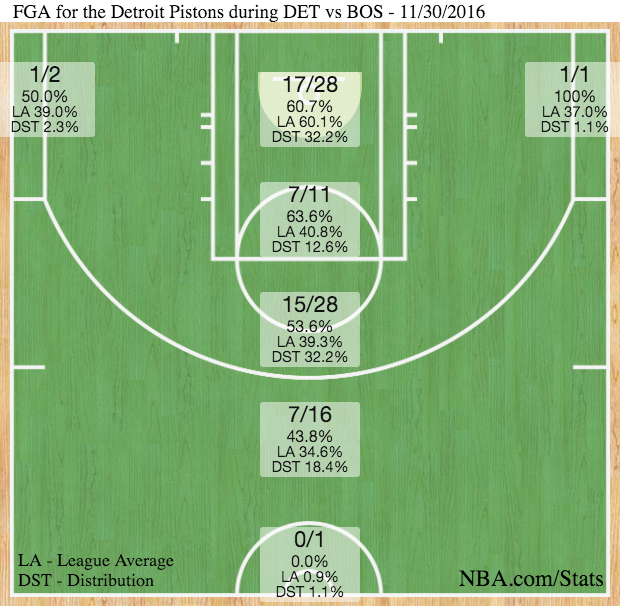 Here is why wins like this really matter for Detroit: The Pistons are still without Reggie Jackson, their star point guard and the catalyst for their offense (he has a strong pick-and-roll chemistry with Andre Drummond). Jackson had knee and thumb issues (he got PRP treatments for both before the season) but has been back at practice recently and should be cleared for a return soon. At the time it was announced he would miss the first month or so of the season, we said the Pistons just needed to keep their heads above water until his return. With the win over Boston Tuesday Detroit is 10-10 and tied for one of the final playoff slots in the East. They did more than just survive, they put themselves in a good position, once Jackson gets back and is settled (conditioning may take a little bit) this team will be poised to make a run up the East standings.

2) Russell Westbrook gets fourth straight triple-double, earns Thunder an overtime win. Russell Westbrook is very good at this basketball thing. After that, we’re kind of running out of superlatives for the guy, who continues to put up numbers at a historic pace every night, including another triple-double of 35 points, 14 rebounds, and 11 assists Wednesday.

But it’s not just the raw numbers, it’s he is lifting this team to wins — everyone in the state of Oklahoma knew Westbrook was going to get the ball and would be hunting or a three to force overtime late Wednesday against the Wizards, and yet he still made the play.

The Thunder are now 12-8 and look like a solid playoff team in the West. And that’s all about an above-average defense and a whole lot of Westbrook carrying the offense.

3) Kings/Sixers postponement leads to Boogie moping, Tweet of the season from Joel Embiid. Good on the Sixers, the Wells Fargo Center, and the NBA for not trying to force a game to be played on an unsafe floor. Blame the Flyers, the building, nature, Trump, whoever you want it doesn’t matter, the NBA couldn’t play in these conditions. No date has been scheduled for a makeup yet, by the way, but expect early January.

The situation did let the two star big men from the game be comedians.

First, there was DeMarcus Cousins doing some serious, two-handed mopping.