Three of the top four teams in our latest NBA power rankings lost on the same night (the only one that didn’t had the night off). Obviously, this is all Donald Trump’s fault. Nonetheless, here is what we learned Tuesday night around the league.

1) What is going on? Clippers blow 18-point lead in Brooklyn, Spurs flat at home against Magic. There must have been something in the water in Brooklyn and San Antonio because it was an ugly night for the two teams that believe they have a shot at knocking off the Warriors in the West this year.

With a 127-122 double-overtime loss to the Nets Tuesday, the Clippers have now lost three straight on the road. Their problems start with their bench — it was a surprising strength for them early on but now has either come apart or regressed to the mean, depending on how you want to view it. The Clippers led by 16 early in the fourth, but it was the bench at the start of the fourth that had no answer for Sean Kilpatrick — 20 points in the fourth (after shooting 3-of-13 through the first three) — and gave up most of the 19-5 Nets run that made it a ballgame. Well, that and the fact the Nets went 6-of-6 from three in the fourth. From there, it was a scramble and Chris Paul alone could not save Los Angeles.

The Clippers were without Blake Griffin who rested for the night, but this is Brooklyn (without Jeremy Lin), losers of seven in a row, it shouldn’t have mattered. Los Angeles has looked slow and tired on the road of late, with dead legs. The Clippers defense has been a little worse during their recent losing streak, but the bigger problem is on offense, where for the last three games they are 15.8 points per 100 off their average. In those three games, the Clippers are shooting 40.9 percent overall, 28 percent from three, and have been outscored by 12.3 per game. Next up on the road trip? The Cleveland Cavaliers. Play like this and it could get ugly.

(As an aside, I think Doc Rivers is right to have lost it on official Kenny Mauer for giving him technical foul, which led to Rivers’ ejection in the first OT. Rivers did cross over half court on the sideline to complain to Lauren Holtkamp about a call, but she was calm and talking to him while Mauer clearly thought he heard something (which Rivers denies), rushed in from across the court and played her protector. It was an overreach in my book. The league won’t see it that way, Rivers will get fined for losing his… cool. But at an emotional point late in a close game Mauer needlessly injected himself into the story.)

As for the Spurs, it was the first game home after a road trip and the Spurs mentally never showed up in a 95-83 loss to Orlando. Starting in the second quarter San Antonio just sagged back on defense and Orlando took advantage — that is the Magic team with the worst offense in the league, but these are NBA players and if you give them room they will hit shots. For example, Serge Ibaka has struggled this season but was 7-of-11 for 18 points on the night. The Spurs struggled to find their footing on offense, but credit Frank Vogel and the Magic defense here — we thought coming into the season they would be good defensively, and this has quietly become a top-10 defensive team. Still, it’s nights off like this that make you kind of wonder just how good the Spurs are and can be.

2) Cavaliers have off night, but give Giannis Antetokounmpo some credit for Bucks win. Cleveland took the day off mentally in Philadelphia on Sunday, but the Cavs were still able to come back and get the win in that one. Milwaukee is not Philly — the Bucks have Giannis Antetokounmpo and some real talent on the roster, coast on them and you will pay. Which is what happened, Cleveland’s bench (once LeBron James and J.R. Smith sat) blew and early lead and the team was listless the rest of the way.

Let’s give credit where it’s due: This may have been the Bucks best game of the season. It all started with Antetokounmpo, who was attacking the basket against a Cavs team that lacks a true rim protector (outside of LeBron) — the Greek Freak was 12-of-15 in the restricted area for the game, finishing with 34 points on 19 shots (plus 12 boards and five steals). The book on Antetokounmpo is clear — make him a jump shooter. The Cavs failed at that. Check out his shot chart. 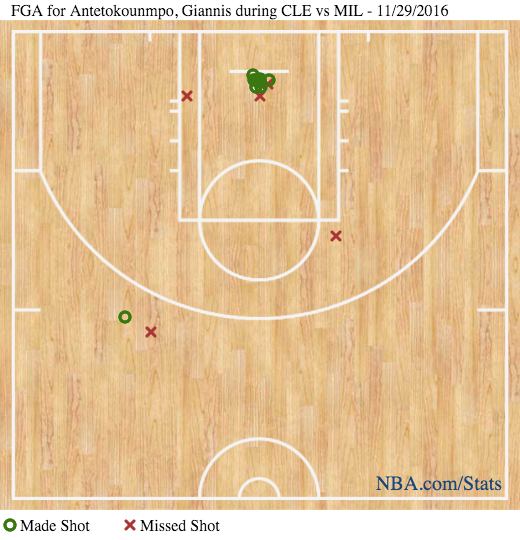 The Bucks are risk takers under Kidd, which has had mixed results, but the one where he put the ball in Antetokounmpo’s hands has been a stroke of genius. Jabari Parker added 18 points and Michael Beasley had 17 off the bench for the Bucks.

3) Thing we will learn in next months: Can Grizzlies keep their heads above water? The Memphis Grizzlies are 11-7 and if the playoffs started today would be the four seed in the West. The question is where they will be in late January. That’s when they should get point guard Mike Conley back from the transverse process fracture in his spine (which sounds worse than it is, this was the injury Cam Newton had).

Here’s the concern: The Grizzlies are 19.3 points per 100 possessions better when Mike Conley is on the court. Pair Conley and Marc Gasol on the court together the Grizzlies are a raw +81 this season, without them they are -88. Throw in the fact that Chandler Parsons (bone bruise), Brandon Wright (ankle) and James Ennis (calf strain) have missed games due to injury lately, and the depth of a thin Memphis side will be tested.

When (if?) the Grizzlies get healthy somewhere just before the All-Star break, will they still be in striking distance of the playoffs in the West, or will this team fade so far it can’t quite climb back? Will some bench players step up? I love the culture in Memphis, I love what David Fizdale has done as coach, but what comes next is a tough ask.