Last year I did a video on defensive terminology as part of one big glossary. This season, I thought it would be fun to do some videos on specific offensive or defensive basketball terms that you may have heard, whether from NBA Twitter heads or simply from your more studious friends.

There’s so much terminology out there, and a lot of duplicate terms for the same thing, so let’s take it slow this week and start out easy with something on offense.

Today we’re talking about “Pistol Action” something that’s also referred to in passing as “Pistol”.

Pistol is actually really easy once you know what it is, and it’ll be fun to recognize it as you’ll see it over and over again since just about every team in the NBA runs it.

Read the breakdown below, or watch the full video breakdown at the top of this page. 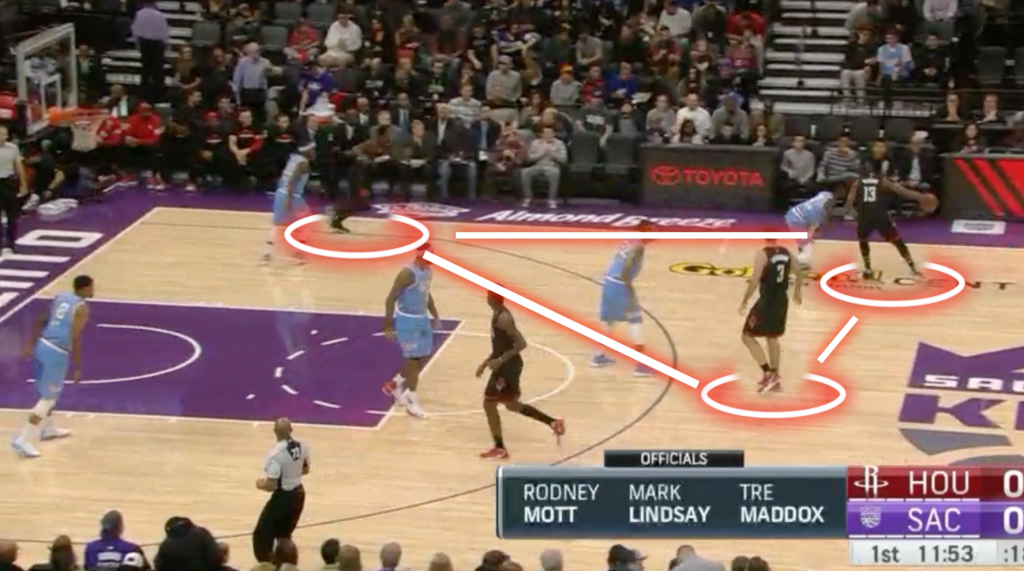 The setup is simple. Pistol is an action early in the offense with a guard handling the ball, a wing in the corner, and either another post or a wing settled at the elbow or 3-point line. They are set up in a loose triangle and it is always run toward the sideline.

Pistol action is when a guard dribbles up the floor quickly toward a wing in the corner, while a post stands nearby at the elbow or 3-point line to assist on screening for one or both players.

There are only two main Pistol options to start a play: One is a dribble handoff, and the other is a pick and roll. It’s that easy.

As James Harden dribbles toward the sideline in the play above, Patrick Beverley comes up from the far wing. Harden then flips the ball to Beverley, who now gets a screen from the post player.

This is the end of the action we would typically refer to as “Pistol”.

As Pistol is simply the early portion of most offensive sets, it’s a reference to an action you can pick out of an entire play.

The pick-and-roll in the Pistol starts when the wing comes up from the corner to set a pick for the ball handler. At this point, a ball-handler will typically run around a second screen by the big man who is part of the triangle.

In the example above, we’re looking at the Portland Trail Blazers run C.J. McCollumn on a slip screen — a screen where instead of making firm contact with a defender, light or no contact is had and McCollum is trying to “slip” free after setting a quick screen.

Portland adds another wrinkle with this one as Mason Plumlee slips HIS screen to dive to the lane, which gives Lillard an open pass and a made basket.

Simply put, Pistol is a quick sideline play with three players that involves a dribble handoff or a pick and roll.

There are infinite options, but if you hear someone say “Pistol” or “Pistol Action” you’ll know they’re referring to that setup on the sideline and that initial exchange between point guard, wing, and big man in that triangle.