Here are the three things we learned Tuesday night, which as a bonus maybe should have included the Pelicans going into Atlanta and getting a win — New Orleans has played much better since Jrue Holiday returned. But we’ll save that for another day now.

1) Knicks future is Kristaps Porzingis — and he looks more like the present every day, too. It was a play Knicks fans have seen countless time over the years: It’s the fourth quarter of a close game, the ball swings to Carmelo Anthony on the wing, and the ball movement stops as he takes his time sizing up how he’s going to attack in isolation.

Except for this time, you could hear the audible groans in Madison Square Garden. The fans knew that Kristaps Porzingis was on his way to a 31-point night and was moving well off the ball (plus getting half his shots via the pick-and-roll). They saw the up-and-under shots from Derrick Rose at the rim and knew he was feeling it on the night. The fans knew ‘Melo in isolation was not the answer — he had dominated the ball at times in the third and was 2-of-9 shooting in the quarter. Those fans eventually got enough of what they wanted, including an isolation step-back dagger by Rose (who was fantastic in the fourth), to give the Knicks the 107-103 win over Portland. It was Porzingis and Rose that accounted for 17 of the Knicks 26 points in the fourth, while Anthony went scoreless in the quarter.

The Knicks are now a .500 basketball team (7-7) and looking like a team that is figuring things out. The biggest key is on defense — they were the worst defensive team in the NBA at the start of the season, but they have been middle of the pack the past couple weeks statistically. Against a dangerous Portland offense, the Knicks held the Blazers to a respectable point per possession (100.5 points per 100 possessions, with the Blazers shooting 6-of-22 from three, to be specific). New York is making strides.

On the other end, the Knicks are finding the rotations that work. Against Portland, in just under 9 minutes that Anthony was at the four and Porzingis was at the five, the Knicks were +7. It’s a small sample size, but it continues a trend over the past couple weeks where that combo has been the Knicks’ best front court. The primary lineup with ‘Melo and Porzingis as the bigs Tuesday night — with Rose, Courtney Lee, and the surprising Mindaugas Kuzminskas — had an offensive rating of 123.1 (points per 100 possessions) and were outscoring the Trail Blazers by 42.4 per 100 (small sample size, but still).

Anthony is still a key part of the Knicks, but this is evolving into Porzingis’ team. Fast. With Rose playing a larger and larger role. This is becoming the kind of team where the ball doesn’t stick in isolation. And it’s one that can make the playoffs.

2) Lakers keep winning, Nick Young keeps making plays — even ones that weren’t intended for him. There is no bigger surprise in the NBA this season than Nick Young. As Baxter Holmes of ESPN and I discussed in the latest PBT podcast, he is hustling on defense and may be the Lakers’ most consistent perimeter defender. Which is “the Joker beats Robin to death” kind of shocking. Young has been an unrepentant gunner on offense since his days at USC, and he’s treated defense like it was a Drew League game. But this season it has been different.

And on offense, Young is hitting game-winning shots — even when the pass wasn’t to him. Watch the three he knocks down to beat the Thunder Tuesday: Brandon Ingram gets the ball, drives, and when Victor Oladipo rotates over Ingram makes the right pass to Lou Williams — except Young steps in front and steals it. Then he knocks down an awkward looking three.

It may not be how Luke Walton drew it up, but the Lakers will take it — this is a win over an OKC team with a top-five player in Russell Westbrook (34 points on 13-of-30 shooting) that is considered a likely playoff team. The Lakers are looking like they could be one, too, although the coming home-and-home with the Warriors will be tough.

3) Did we just see a Jamal Murray breakout game? The biggest upset of the night may have been Denver knocking off the Bulls (it was probably New Orleans going to Atlanta and getting the win, but Denver got an upset, too). Rookie Jamal Murray was a big part of that — 24 points on 9-of-13 shooting off the bench, with six rebounds tossed in as well. This is the shot chart of a man having a good night. 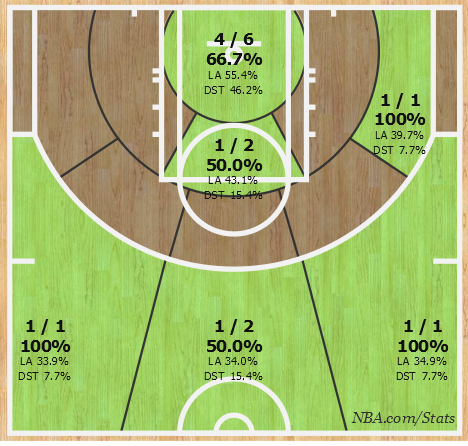 Watch the buckets for yourself.

Murray isn’t jumping into the Denver starting lineup yet, and Mike Malone didn’t have him on the floor to close out the game, but the rookie is starting to find his footing in the league. He’s for real, and the Nets have another quality piece to the puzzle.