What you missed around the NBA on Sunday, while you were digging out from a tidal wave of foam…

1) Another triple-double for Russell Westbrook, another loss for Thunder. That’s five. In 14 games, Russell Westbrook now has five triple-doubles — a pace that would give him 29 over the course of the season (which would be third most all-time for a season, behind Oscar Robertson and Wilt Chamberlain). Westbrook had 31 points, 15 assists, and 11 rebounds Sunday. It was another impressive performance.

And it was another loss (115-111 to Indiana), one that showed how thin the margin is for the Thunder. This was not Westbrook’s best night — he described his play as “sh**y.” He needed 34 shots to get his 31 points, he shot just 5-of-13 in the restricted area, and he had seven turnovers. He was -18 for the game. His shot chart was not pretty. 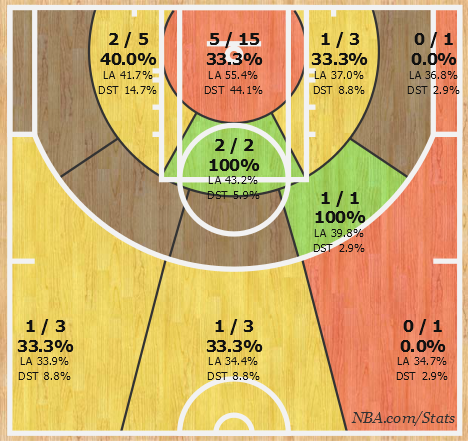 The challenge for Westbrook is he not only has to put up numbers and drive the Thunder offense, he needs to be efficient doing so, if not the Thunder will struggle to win. They don’t have other reliable shot creators and options, it’s the Russell Westbrook show.

Westbrook is almost averaging a triple-double (31.6 points, 10.4 assists, and 9.7 rebounds a game) and that has him in the MVP hunt early, but will the Thunder win enough games for him to win over voters?

2) Was it the meeting? Knicks beat Hawks and have won three of four. New York picked up its biggest win of the season Sunday, beating a previously-hot Atlanta team 104-94. There were several factors involved: No Joakim Noah seemed to free up Kristaps Porzingis, who had 19 points and 11 rebounds; Carmelo Anthony had 31 points plus some key rebounds and passes late; Atlanta was sluggish all game, like they had really enjoyed their Saturday night in New York and they had not recovered for a Sunday day game. After the game, the Knicks credited a clear-the-air meeting with Phil Jackson (although I think the impact of those kinds of meetings on the court is often overstated).

However, the biggest key was the Knicks defense, which held the Hawks to 40 percent shooting, including 6-of-21 from three. New York has won three of four now, and the big difference is on the defensive end. New York had the worst in the NBA to start the season, but in those last four games it’s been average (17th in the NBA over that time). That’s a massive improvement. And it’s enough to get some wins.

We’ll see if they can sustain it this week. Tuesday Portland comes to town and they will test any defense with their guard play. Then comes a home-and-home against a good Charlotte team. But if the Knicks can keep getting stops, things will be looking up.

3) The Raptors got screwed and the league needs to look at clock issues. I don’t know that Terrence Ross could have gotten off a clean shot in less than 2.4 seconds, he may not have. I don’t know that the outcome of the game would have been any different. But the point is the officials in the Kings’ win over Toronto handled the clock poorly at the end of the game and Toronto never got the chance it deserved.

First, there were 27.2 seconds left when the Kings started their last possession of the game, which ended with a 24-second violation (Sacramento just had to hit the rim, and failed) — but the refs were good with 2.4 seconds left on the clock. Should have been 3.2, if you can do math.

Then on the final play, the clock did not start when DeMarcus Cousins tipped it on the inbounds pass, as it should have. Ross got the ball and hit a three before time expired — but the officials waived it off saying he did not get the shot off before the buzzer should have sounded. That doesn’t fly for me — the home clock operators screws up and the visitors pay the price? Could Ross have gotten that shot off faster and made it? Who knows. I don’t know if the clock impacted when Ross shot — but it could have. That’s the point.

The officials applied the current rule correctly, but the rule is flawed. The only fair thing would have been to replay the final 2.4. That didn’t happen.

It goes in the books as a quality win for the Kings, one they needed and frankly earned with their play most of the game. The ending was just messed up.