1) Fear Andrew Wiggins, for no one in the land seems able to slow him. The Philadelphia/Minnesota game Thursday was billed as the battle of two rising teams in the NBA, which is nominally true but Sixers coach Brett Brown summed it up best, “They’re two years ahead of us.” The Sixers should get there, but the Timberwolves today are starting to look like a team that can challenge for a playoff spot this season (they are a 4-7 team with the point differential of a 7-4 team). Minnesota got the win 110-86.

While everyone rightfully talks about Karl-Anthony Towns game, people seem to be overlooking the leap Andrew Wiggins has made — he dropped 35 on the Sixers and showed off all the ways he has developed into an elite wing player in the league.

Wiggins hit 3-of-6 from three — he’s shooting 53.5 percent from there on the season. He’s not going to sustain that level, but he can hit the long ball and you can’t ignore him there anymore. His handles have dramatically improved over the past two seasons, which has allowed him to use his insane athleticism to blow by his man and get to the rim — where Wiggins draws fouls. He only took four free throws against Philly, but he’s averaging 8.5 a game. He’s become a quality pick-and-roll ball handler, to the point the Timberwolves now run their late-game offense through him. He’s shooting 51.9 percent when posting guys up, an excellent percentage for a wing. He destroys guys in isolation. And he’s doing all of it efficiently — look at his shot chart against the Sixers: 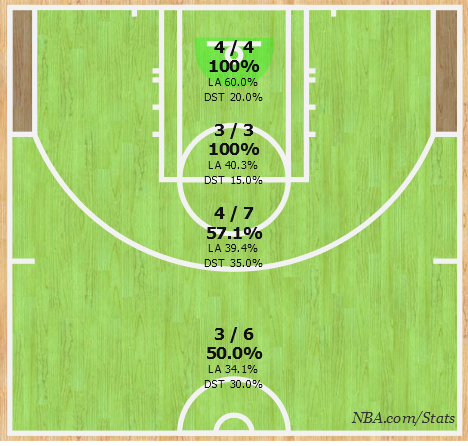 The Timberwolves are still figuring out how to defend as a team, but does anyone doubt Tom Thibodeau will get them there? As they find their way, Wiggins is going to give them enough offense to get a win.

2) Road warriors? Chicago grinds out win in Utah. The Bulls are on the last circus trip ever — no longer will they be forced on a two-week road trip each year so clowns can take over the United Center — and this final one was going to be a test: Just how good are these Bulls?

So far they are 2-0 on the trip, and the win they picked up in Utah was telling — they beat the Jazz at their own game. This was a slow (89 possessions), defensive game, which is largely how Utah wants to play, and Chicago had just eight assists total for the night. But it was the Bulls defense that held Utah to 29 percent shooting in the third quarter and started to pull away, and it was the Bulls that got key shots from Dwyane Wade (18 points) and Jimmy Butler (20) hit key shots late that snuffed out attempted Utah runs. Butler was the team leader Chicago needed, not just in points but he had the Gordon Hayward defensive assignment much of the night and Hayward shot 3-of-15 from the field. Late in the game, it was Butler that buried the dagger.

There are 70 games left in the Bulls’ season, it’s far too early to declare anything certain. But at 8-4 the Bulls look to have answered the questions about their lack of shooting and spacing, and the team is just getting wins. They look legit.

There were a lot of factors in the 119-112 Wizards win that wasn’t as close as that score makes it seem. There’s the fact the Knicks were flat most of the night — and their defense is terrible when the team plays like it cares. There was the fact John Wall was motivated by embarrassment — the night before the Wizards lost to a Sixers team resting Joel Embiid — and the point guard had 23 points and 11 assists. There’s the fact Markieff Morris did a good job defending and harassing Kristaps Porzingis all night (so Derrick Rose decided to take on more, but it was Brandon Jennings who had 15 in the fourth and tried to lead the comeback).

Make no mistake, however, Beal’s return from three games out with a hamstring injury helped. He had 18 points on 5-of-11 shooting, and he hit 3-of-6 from three. With Beal back in the starting lineup, that group was +21 in 20 minutes, playing fast and playing very good defense (the starters had a defensive rating of 81.1 points allowed per 100 possessions). The Wizards were +17 on the night in the 28 minutes Wall and Beal were paired, and the team’s offense clicked with them together.

The Knicks are a nice warm-up run, but the Wizards are going to need a lot more of this to get their season going in the right direction. And even then, this slow start may be too much to overcome if the goal in Washington is the playoffs.

Bonus thing we learned: James Harden is still very good at basketball. A night after Andre Roberson and the Thunder made him look human, Harden rebounded with a triple-double and a win against a Blazers team that had no defensive answer for him — 26 points, 14 assists, 12 rebounds. Watch the beard go to work for yourself.